) is the descending lunar node in Vedic, or Hindu astrology. After the head of Svarbhānu, an Asura, was cut off by God Vishnu, his head and body joined with a snake to form 'Ketu', representing the body without a head, and Rahu, representing the head without a body. According to some accounts in Hindu mythology, Ketu belongs to Jaimini Gotra, whereas Rahu is from Paiteenasa gotra and hence both are totally different entities with distinct characteristics and not two parts of a common body. Ketu is generally referred to as a "shadow" planet. It is believed to have a tremendous impact on human lives and also the whole creation. In some special circumstances it helps someone achieve the zenith of fame. Ketu is often depicted with a gem or star on his head signifying a mystery light.

In ancient Tamil astrological scripts, Ketu was considered as incarnation of Indra. During a war with Asuras, Indra was defeated and took a passive form and a subtle state as Ketu. Indra spent this time realizing his past mistakes, and failures and that lead to spirituality towards Lord Shiva. 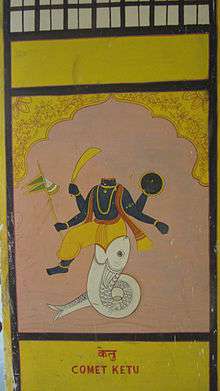 A mural of Ketu. Depicted as the body without head. from Jawahar Kala Kendra, Jaipur

In Hindu astrology Ketu represents karmic collections both good and bad, spirituality and supernatural influences. Ketu signifies the spiritual process of the refinement of materialization to spirit and is considered both malefic and benefic, as it causes sorrow and loss, and yet at the same time turns the individual to God. In other words, it causes material loss in order to force a more spiritual outlook in the person. Ketu is a karaka or indicator of intelligence, wisdom, non-attachment, fantasy, penetrating insight, derangement, and psychic abilities. Ketu is believed to bring prosperity to the devotee's family, removes the effects of snakebite and illness arising out of poisons. He grants good health, wealth and cattle to his devotees. Ketu is the lord of three nakshatras or lunar mansions: Ashvini, Magha and Mula.

The people who come under the influence of Ketu can achieve great heights, most of them spiritual.

Rahu, being a karmic planet would show the necessity and urge to work on a specific area of life where there had been ignorance in the past life. To balance the apparent dissatisfaction one has to go that extra mile to provide a satisfactory settlement in the present lifetime. When afflicted this "extra mile" is lengthened otherwise it is sometimes given by unforeseen circumstances or achieved through proper discipline. Ketu, would indicate the areas where unnecessary over-indulgence has been in the past life and to balance the over-satisfaction of the karmic presence there has to be some kind of dissatisfaction in that specific area of life. When afflicted in birth chart this dissatisfaction is imposed forcefully on the soul otherwise it is self-willed.

N.B: Rahu and Ketu are neither exalted nor debilitated by their mere presence in a sign but they are identically conditioned as per their hosts or dispositors.