Tirunallar Saniswaran Temple or Dharbaranyeswarar Temple is a Hindu temple dedicated to Lord Sani(saturn)[1] located in Tirunallar in Karaikal district of Pondicherry, India.[2] The presiding deity is Lord Siva, Dharbaranyeswar and the place Tirunallar was historically called Dharbaranyam. The temple is revered by the hymns of 7th century Tamil saivite poets, Appar, Sundarar and Sambandhar and is classified as Paadal Petra Sthalam.

The presiding deity is Dharbaranyeswarar(Lord Siva)[3] and is believed to have been made of dharba grass. The worship is also centered around the icon of planet saturn, called Saniswarar, originally treated as the door keeper of the shrine. According to Hinduism, saturn resides in each rasi(zodiac) for two and half years. The tradition is to worship Saniswarar before entering the inner sanctum of Lord Siva.

Sambandar, the 7th century nayanar and Tamil saivite poet has revered the deity with four hymns, in one of which he refers to a contest with Jains, and his victory. Appar and Sundarar, the other Nayanars have glorified the temple with their hymns. Arunagirinathar, a 15th-century poet and staunch devoteet of Lord Muruga has composed hymns on the deity and this temple is attributed to Murugan worship as well.[4] 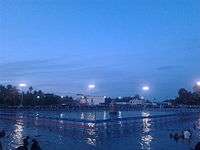 The Nala Theertham at dawn

The Thyagarajar Temple at Tiruvarur is famous for the ajapa thanam(dance without chanting), that is executed by the deity itself. According to legend, a Chola king named Mucukunta obtained a boon from Indra(a celestial deity) and wished to receive an image of Thyagaraja Swamy(presiding deity, Shiva in the temple) reposing on the chest of reclining Lord Vishnu. Indra tried to misguide the king and had six other images made, but the king chose the right image at Tiruvarur. The other six images were installed in Thirukkuvalai, Nagapattinam, Tirukarayil, Tirukolili, Thirukkuvalai and Tirumaraikadu.[5] All the seven places are villages situated in the river Cauvery delta. All seven Thyagaraja images are said to dance when taken in procession(it is the bearers of the processional deity who actually dance). The temples with dance styles are regarded as Saptha Vidangam(seven dance moves)[6] and the related temples are as under:[7]

The temple is counted as one of the Navagraha Temples for planet Saturn.[8][9] Tirugnana Sambandar, a 7th-century Tamil Saivite poet, venerated Naganathar in ten verses in Tevaram, compiled as the First Tirumurai. Appar, a contemporary of Sambandar, also venerated Dharbaranyeswarar in 10 verses in Tevaram, compiled as the Fifth Tirumurai. As the temple is revered in Tevaram, it is classified as Paadal Petra Sthalam, one of the 276 temples that find mention in the Saiva canon.