This article is about the district during the British Raj. For the mountain range, see Khasi Hills. 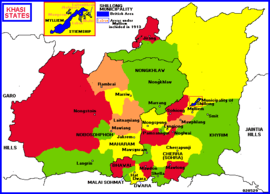 The Jaintia Hills are located further to the east from the Khasi Hills. The twelve Chiefs of the elaka (tribal province) of the Jaintia, a Khasi subtribe of the) Pantars = Syntengs tribes, are styled Dolloi, and the land is called after them in Khasi: KA RI KHADAR DOLLOI ‘Land of 12 Tribal Chiefs‘) - they are in Nartiang itself (see the Raja, uniquely also styled, as premier Chief: U Kongsong), and in Amwi, Jowai, Lakadong, Mynso, Nongbah, Nongjngi, Nongphyllut, Nongtallang, Raliang, Shangpung, Sutnga (see below; also cited as seat of a Syiem)

Above them is the only true princely ruler of the area, the Raja of Jaintiapur. His winter capital is now in Bangladesh, with his summer residence shifted from Sutnga (where the family started as Syiems) to Nartiang; also a palace in the commercial center Borghat.

The Khasi Hills are located east of the Garo Hills. The other Khasi tribes did not have princes but their twenty petty states (hima), and sometimes even smaller tribal divisions, are led by one or two Chiefs -selected in various ways- usually styled Siem, Syiem.[2]