Tanjore district was one of the districts in the erstwhile Madras Presidency of British India. It covered the area of the present-day districts of Thanjavur, Tiruvarur and Nagapattinam and the Aranthangi taluk of Pudukkottai district in Tamil Nadu. Apart from being a bedrock of Brahminism, Tanjore was a centre of Chola cultural heritage and one of the richest and most prosperous districts in Madras Presidency.

Tanjore district was constituted in 1799 when the Thanjavur Maratha ruler Serfoji II ceded most of his kingdom to the British East India Company in return for his restitution on the throne. Tanjore district, which is situated on the Cauvery Delta, is one of the richest rice-growing regions in South India. It was scarcely affected by famines such as the Great Famine of 1876–78. 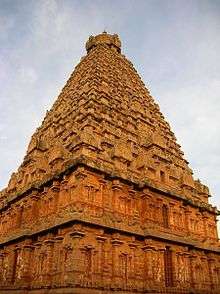 The Brihadeeswara Temple at Tanjore

Tanjore district was inhabited at least since the first millennium B. C. and was the traditional homeland of the Chola Dynasty. The Early Cholas ruled Tanjore from the 3rd century B. C. to the 3rd century A. D. The town of Poompuhar or Kaveripoompattinam served as an important port trading with Rome. Following the Kalabhra interregnum, Tanjore recovered its past glory under the Pallavas and reached the zenith of its prosperity under the Medieval Cholas and Later Cholas. In the 13th century, Tanjore was annexed by the Pandyas who were later defeated by Malik Kafur. Tanjore was ruled for brief periods by the Delhi Sultanate and the Madurai Sultanate, till the 15th century, when it was conquered by the Vijayanagar kings under whom it recovered much of its glory. Tanjore was a part of the Vijayanagar Empire and its successors, the Madurai Nayaks and the Thanjavur Nayaks, until 1674, when it was conquered by Venkoji a brother of Chattrapathi Shivaji, who founded the Thanjavur Maratha kingdom. The British East India Company began to play a major part in the affairs of the region from 1749 onwards. In the 1760s and 1770s, the Thanjavur Maratha ruler, the Nawab of Carnatic and other major powers of the region were brought under the British sphere of influence. In 1799, the British East India Company assisted the deposed Thanjavur Maratha king Serfoji II in regaining his throne. In return for British assistance, Serfoji II retained his hold over Tanjore city and ceded the rest of his kingdom to the British East India Company. Tanjore city was eventually annexed by the British as per the Doctrine of Lapse in 1855 on the death of his son Shivaji without a surviving male heir. The district of Tanjore was created in about 1800, its limits almost the same as that of the preceding Thanjavur Maratha kingdom.

Vaishnavite Brahmin students at a Gurukulam in Tanjore, c.a. 1909

Tanjore district covered a total area of 9,600 square kilometres (3,710 sq mi). It had a population of 2,245,029 in 1901. 91 percent of the population were Hindus, 5 percent were Muslims and 4 percent Christian. The population density was 234 inhabitants per square kilometre (605/sq mi). As of 1901, Tanjore was the most densely populated district in the Madras Presidency with Kumbakonam, Negapatam and Mayavaram being some of the most densely populated taluks.

Kallars, Vanniyars, Vellalars, Thondaimandala Mudaliars, Paraiyars, Reddis, Udaiyars and Tamil,are the Castes here. Telugu and Maratha Brahmins. During the 19th century, the Thanjavur Maratha aristocracy provided most of the Diwans of the princely state of Travancore. The Imperial Gazetteer of India 1908 lists Thanjavur, along with the South Canara and Ganjam districts, as the three districts of the Madras Presidency where Brahmins are most numerous. Throughout the British rule, Tamil Brahmins from Tanjore district dominated the provincial politics and civil services. Until the 1960s, the economy was primarily feudal with most of the land in the hands of upper-caste Brahmin, Vellalar and Moopanar mirasidars and zamindars who cultivated their land by employing Paraiyar agricultural labourers.

A 1928 Map of the Thanjavur Maratha kingdom. The boundaries correlate almost exactly with that of the Tanjore district of British India.

As of 1901, Tanjore district was made up of nine taluks.

As of 1901, there were five municipalities in the district: Kumbakonam, Tanjore, Mannargudi, Mayavaram and Negapatam. From 1800 to 1840, the District Collector of Tanjore was also the agent of Pudukkottai state. However, Pudukkottai was later transferred to the jurisdiction of Madura and then Trichinopoly.

During British times, Tanjore district was famous for its metal work. Brass, copper and silver utensils were manufactured in large quantities. The South Indian Railway Workshops were established at Negapatam in the 1860s. The chief centres of land trade were Tanjore, Kumbakonam, Mayavaram and Mannargudi while the chief centres of sea trade were Tranquebar, Muttupet, Negapatam, Adiramapattinam and Ammapatam. The town of Kumbakonam was known for its silk sarees and rice and flour mills. It was also one of the leading producers of betel leaves and nuts. Tanjore city was known for silk-weaving, lace, embroidery, jewellery, pithwork and manufacture of metal work and musical instruments.

The list of district collectors of Tanjore from its formation in December 1799 till the abolition of Madras Province and its conversion to a state on January 26, 1950 is given below: