The Trichinopoly district was a district of the erstwhile Madras Presidency of British India. It covered the present-day districts of Tiruchirappalli, Karur, Ariyalur and Perambalur in the Indian state of Tamil Nadu. The administrative headquarters was the town of Trichinopoly, Trichy or Tiruchi, now known as Tiruchirappalli. The district covered an area of 2,632 square miles (6,820 km2) in 1907. It was bound by the districts of South Arcot to the north, Salem to the west, Coimbatore to the west and north-west, Tanjore to the east and Madura to the south. The princely state of Pudukkottai remained within the juridsiction of Trichinopoly district from 1865 to 1947.

Trichinopoly was one of the oldest inhabited regions in South India. Archaeological excavations have revealed Stone Age sites. The town of Uraiyur, the capital of the Early Cholas, was a part of Trichinopoly district. The region was annexed to Madras Presidency in the late 18th century and a separate district was created in 1801. When India became independent in 1947, the name of the district was de-Anglicized as Tiruchirapalli. 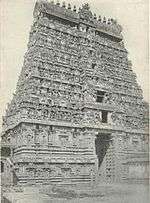 Stone age implements discovered in Trichinopoly district indicate that it might have been inhabited as early as the 3rd millennium BC. During the Sangam Age, Trichinopoly was the site of Uraiyur, the Early Chola capital. At about the same time, the western part of the district was under the rule of the Cheras under whom Musiri flourished as an important riverine port indulging in trade with Rome and Egypt. Trichinopoly was a part of the kingdom of the Pallavas who laid the foundation of the Rockfort Uchchi Pillaiyar temple and left their marks in the numerous other temples in and around Trichy town. After the demise of the Pallavas, the district was ruled by the Medieval and Later Cholas, Later Pandyas, Delhi Sultanate, Madurai Sultanate and the Vijayanagar kingdom. The city of Trichy served as a capital of the Madurai Nayaks who succeeded the Vijayanagar kingdom. After the Madurai Nayak kingdom fell in 1736, Trichinopoly was occupied for short periods by Chanda Sahib of the Carnatic, the Thanjavur Marathas (see siege of Trichinopoly), the French East India Company and Tipu Sultan of Mysore before it was finally conquered by the British East India Company and made a district of Madras Presidency in 1801. Trichinopoly was an important British stronghold during the Carnatic Wars and a number of skirmishes were fought there.

The Trichinopoly municipality was the oldest municipality in the district, established in 1866, followed by Srirangam in 1871 and Karur in 1874. 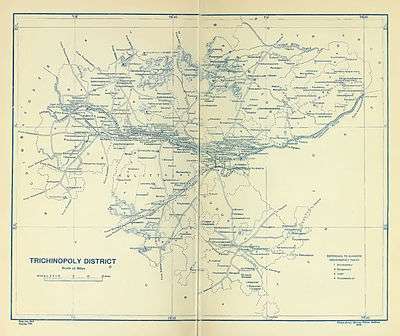 A map of Trichinopoly district in 1907

As of 1901, Trichinopoly district was made up of seven taluks.