Doherty was the third son in a family of six born in Andersonstown, Belfast. He was educated at primary level at St. Theresa's Primary School and at secondary level at Glen Road Christian Brothers School (CBS). The Doherty brothers were known cyclists and sportsmen in the Andersontown area; Kieran won an Antrim Gaelic football medal at minor level in 1971.[1]

Doherty joined Fianna Éireann in 1971 and was interned by the British Government between February 1973 and November 1975. Kieran's brothers Michael and Terence were interned between 1972 and 1974.

Doherty worked as an apprentice heating engineer.[2] His girlfriend was Geraldine Scheiss; although they never became formally engaged they became very close towards the end of his life. Before his arrest she had not known that he was in the IRA.[3]

In August 1976, while he was out to set a bomb, the van he was in was chased by the police. During the chase Doherty managed to leave the van and hijack a car but was caught as he was escaping. He was convicted and sentenced to 18 years for possession of firearms and explosives, with another four years for the hijack.

He died at the age of 25 in the 1981 Irish hunger strike in the Maze prison (known to republicans as Long Kesh). He lasted 73 days on hunger strike, the longest of the 1981 hunger strikers, and only one day short of Terence MacSwiney.

While on hunger strike he was elected as an Anti H-Block TD for the Cavan–Monaghan constituency at the 1981 general election, which was held in the Republic of Ireland on 11 June.[2] He received 9,121 (15.1%) first preference votes and was elected on the fourth count.[4] Doherty is the shortest-serving Dáil deputy ever, having served as a TD for two months. The two seats gained by Anti H-Block candidates denied Charles Haughey the chance to form a government, and the 22nd Dáil saw Fine Gael and the Labour Party forming a government with Garret FitzGerald as Taoiseach. 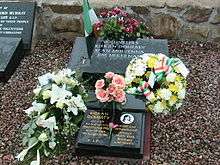 He is commemorated on the Irish Martyrs Memorial at Waverley Cemetery in Sydney, Australia. In October 2016 a painting of him was unveiled in Leinster House by Sinn Fein.