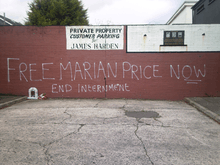 Price was jailed for her part in the IRA London bombing campaign of 1973. She was part of a unit that placed four car bombs in London on 8 March 1973. The 1973 Old Bailey bombing and that of the Whitehall army recruitment centre saw 200 injured. One man died of a heart attack. The sisters were apprehended along with Hugh Feeney, Gerry Kelly, and six others, as they were boarding a flight to Ireland. They were tried and convicted at the Great Hall in Winchester Castle on 14 November after two days of deliberation by the jury. Marian Price was sentenced to two life terms.

She and her sister Dolours Price, along with Kelly and Feeney, immediately went on hunger strike in a campaign to be repatriated to a prison in Northern Ireland. The hunger strike lasted over 200 days,[2] with the hunger strikers being force-fed by prison authorities for 167 of them.[3]

In an interview with Suzanne Breen, Price described being force-fed:

Four male prison officers tie you into the chair so tightly with sheets you can't struggle. You clench your teeth to try to keep your mouth closed but they push a metal spring device around your jaw to prise it open. They force a wooden clamp with a hole in the middle into your mouth. Then, they insert a big rubber tube down that. They hold your head back. You can't move. They throw whatever they like into the food mixer – orange juice, soup, or cartons of cream if they want to beef up the calories. They take jugs of this gruel from the food mixer and pour it into a funnel attached to the tube. The force-feeding takes 15 minutes but it feels like forever. You're in control of nothing. You're terrified the food will go down the wrong way and you won't be able to let them know because you can't speak or move. You're frightened you'll choke to death.

Marian Price was freed in 1980 and resumed a private life, emerging only in the 1990s as a vocal opponent of Sinn Féin's "peace strategy". Of the Good Friday Agreement she said: "It is not, certainly not, what I went to prison for."[4]

Price gave the graveside oration at the funeral of Joseph O'Connor, a member of the Real IRA. She is a prominent Republican and member of the 32 County Sovereignty Movement and spokesperson for the Irish Republican Prisoners Welfare Association.

On 17 November 2009 she was named as being one of two people arrested in connection with an attack on the Massereene Barracks in Northern Ireland in March 2009 in which two British soldiers were shot dead.[5] In 2011 she was charged with providing property for the purposes of terrorism.[6]

On 15 May 2011, she was charged with encouraging support for an illegal organisation. This related to her involvement in a statement given at an Easter Rising rally in Derry in 2011.[7]

On the same day the Secretary of State for Northern Ireland Owen Paterson revoked her release from prison on licence. Paterson said the decision was made because the threat posed by Price had "significantly increased".[8]

Price was the only female inmate at Maghaberry prison in Antrim from May 2011 until she was moved to the hospital wing of Hydebank prison in February 2012. In May 2012, at a rally in her support, Price's husband, Gerry McGlinchey, stated that his wife was near the breaking point. The charges against Price and three men from Derry were later dismissed at Derry Magistrate's Court in May 2012.

On 7 June 2012, a protest close to Times Square in Manhattan called for Price to be released from what her family describes as internment.[9] On 30 May 2013, Price was released from prison after a decision by the Parole Commissioners.[10]

Marion Price McGlinchey was refused a visa to enter the USA on 15 December 1999. She had been due to speak at a fundraising event in New York that had been organised by the Irish Freedom Committee.[11]