Before his involvement in politics he fought in the First World War as a junior officer in the British Army. He was decorated with the Military Cross fought in the Battle of the Somme in 1916. His positions after the war included Speaker of the House of Commons of Northern Ireland for twenty-three years, and member of the Privy Council of Northern Ireland, to which he was appointed in 1946.

He was shot and killed[1] (aged 86), along with his son, James (aged 48), by the Provisional Irish Republican Army in 1981 at Tynan Abbey, their home, which was burnt to the ground during the attack.

Sir Norman was born in Bryansford, County Down, Ireland, the son of Sir Charles Stronge, 7th Baronet, and Marian Bostock, whose family were from Epsom.[2]

Educated at Eton, during the First World War (1914–18) he joined the British Army and was commissioned as a second lieutenant into the Royal Inniskilling Fusiliers. He fought on the Western Front with the 10th (Service) Battalion, as lieutenant and later as captain.[3] He was decorated with the Military Cross[4] and the Belgian croix de guerre. He survived the first day of the Battle of the Somme in July 1916 and was the first soldier after the start of the battle to be mentioned in dispatches by General Sir Douglas Haig, commander of the British Expeditionary Force (BEF) on the Western Front. In April 1918, he was appointed adjutant of the 15th (Service) Battalion (North Belfast), Royal Irish Rifles.[5] He was wounded in action near Kortrijk, Belgium towards the end of the war on 20 October 1918.[6] He relinquished his commission on 19 August 1919, and was permitted to retain the rank of captain.[7]

On the outbreak of the Second World War (1939–45) in September 1939, he was again commissioned, this time into the North Irish Horse, Royal Armoured Corps, reverting to the rank of second lieutenant.[8] He relinquished the commission on 20 April 1940 due to ill-health.[9] In 1950, he was appointed Honorary Colonel of a Territorial Army (TA) unit of the Royal Irish Fusiliers.[10]

In his career at Stormont, he became Assistant Parliamentary Secretary to the Ministry of Finance (Assistant Whip) from 16 January 1941;[21] on 6 February 1942 he was promoted to be Parliamentary Secretary to the Ministry of Finance (Chief Whip).[22] He held this post at the time when John Miller Andrews was deposed as Prime Minister of Northern Ireland and replaced by Sir Basil Brooke due to backbench pressure from Ulster Unionist MPs. On 3 November 1944, Stronge stood down from the government. 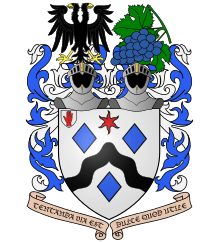 Arms of the Stronge Baronets, of Tynan

When the new Parliament assembled on 17 July 1945 Stronge was nominated as Speaker of the Northern Ireland House of Commons by Lord Glentoran, who said that Stronge came from a "family which has been known for generations for its fairness, its courtesy, and its neighbourliness, and for that feeling of kindliness which is so essential to the Speaker of this House".[23] The nomination was seconded by Jack Beattie, an Irish nationalist who sat as an Independent Labour MP.

On 30 October 1945, Stronge was involved in a dispute in the chamber. A minister in the government had been taken ill and was unable to answer a series of Parliamentary Questions which had been put to him; Stronge allowed the Members who had put the questions to defer them until the Minister had recovered.[24] Beattie protested that this was not correct procedure, and Stronge agreed to look at it further; this decision incensed Harry Midgley, who had personal grievances with Beattie. Midgley shouted at Stronge "Are you not competent to discharge your duties without advice from this Member on his weekly visits to the House?" Despite Stronge calling for order, Midgley then crossed over and punched Beattie. Stronge excluded him from the Chamber for the remainder of the sitting,[25] and Midgley apologised the next day.[26]

Stronge was appointed to the Privy Council of Northern Ireland in 1946.[27][28][29] He was Chairman of Armagh County Council[30] from 1944-55. Among other positions he held were Lord Lieutenant of Armagh (1939–81),[31][32] (he was a Deputy Lieutenant from 1931[33][34]) President of the Northern Ireland Council of the Royal British Legion and Justice of the Peace for both Counties Armagh and Londonderry. He was the Sovereign Grand Master of the Royal Black Institution and a member of Derryshaw Boyne Defenders Orange Lodge of the Orange Order. Stronge was appointed a Commander Brother of the Venerable Order of Saint John in 1952,[35] and promoted to Knight in 1964.[36]

In 1956, one of Stronge's outside posts caused a difficulty. He had been named on the Central Advisory Council on Disabled Persons, a position which brought no remuneration in practice but could have done so in theory. It was realised that the theoretical possibility of money being paid meant that this was an "Office of Profit under the Crown" which disqualified him from election. On 16 January 1956 Stronge wrote to resign his post as Speaker temporarily, so that legislation could be passed to validate his actions and indemnify him from the consequences of acting while disqualified.[37] Owing to the constitutional provisions of the Government of Ireland Act, this legislation had to be passed by the Parliament of the United Kingdom.

Once it had been passed, on 23 April 1956 the Speaker who had been elected temporarily (W. F. McCoy) resigned.[38] Stronge was re-elected on 26 April, referring in his speech accepting the nomination to his time away from Parliament looking after his farm: "I have had more time to look at bullocks, and more time to look at their prices".[39]

After Stronge's retirement from politics in 1969, he farmed the family's several thousand acre estate at Tynan Abbey.[43]

Sir Norman Stronge (aged 86) and his son, Sir James (aged 48), were murdered while watching television in the library of their home,[42] Tynan Abbey, on the evening of 21 January 1981, by members of the Provisional Irish Republican Army, armed with machine guns, who used grenades to break down the locked heavy doors to the home.[42]

The Stronge family home was then burnt to the ground as a result of two bomb explosions.[44] On seeing the explosions at the house (and a flare Stronge lit in an attempt to alert the authorities), the Royal Ulster Constabulary and British Army troops arrived at the scene and established a road-block at the gate lodge. They encountered at least eight fleeing gunmen. There followed a gunfight lasting twenty minutes in which at least two hundred shots were fired. There were no casualties among the security forces but the gunmen escaped.[6] The bodies of the father and son were later discovered in the library of their blazing home, each had gunshot wounds in the head.[44]

It is not known who died first, Norman or James. Under the legal fiction known as the doctrine of survival, James is still listed as succeeding to the baronetcy.[45] Stronge was buried in Tynan Parish church in a joint service with his son. The sword and cap of the Lord Lieutenant of Tyrone (Major John Hamilton-Stubber) were placed on his coffin in lieu of his own, which had been destroyed with his other possessions in the fire.[6]

The coffin was carried by the 5th Battalion the Royal Irish Rangers, the successors to his old regiment. During the service a telegram, sent from Queen Elizabeth II to one of Sir Norman's daughters, was read. It stated:[46]

The funeral was described in the following words:

The Secretary of State for Northern Ireland, Humphrey Atkins, was informed by friends of the Stronge family that he would not be welcome at the funeral because of government policy on Irish border security.[48] Atkins left the Northern Ireland Office later that year, to be replaced by Jim Prior.

Stronge is commemorated with a tablet in the Northern Ireland Assembly Chamber (the former House of Commons Chamber) in Parliament Buildings on the Stormont Estate.[49]

The Provisional IRA released a statement in Belfast, quoted in The Times, claiming that "This deliberate attack on the symbols of hated unionism was a direct reprisal for a whole series of loyalist assassinations and murder attacks on nationalist peoples and nationalist activities." This may refer to the attempted assassinations of Bernadette McAliskey and her husband Michael on 16 January, and the assassinations of four republican activists which had taken place since May 1980 (Ronnie Bunting, Miriam Daly, Noel Lyttle and John Turnley), all by loyalists. However, none of these individuals were associated with the PIRA. The McAliskeys, Daly, Turnley, Lyttle and Bunting belonged to or endorsed republican splinter groups such as the OIRA, IRSP, etc.[50]

The killings were referred to as murder by almost all mainstream media sources including The Daily Telegraph, The Scotsman, The New York Times and Time magazine, by the Reverend Ian Paisley in the House of Commons and by Lord Cooke of Islandreagh in the House of Lords.[51]

Stronge was described at the time of his death by Social Democratic and Labour Party politician Austin Currie as having been "even at 86 years of age … still incomparably more of a man than the cowardly dregs of humanity who ended his life in this barbaric way."[52]

In 1984, Seamus Shannon was arrested by the Garda in the Republic of Ireland and handed over to the Royal Ulster Constabulary on a warrant accusing him of involvement in the murders of Sir Norman Stronge and Sir James Stronge. The Irish Supreme Court, considering his extradition to Northern Ireland, rejected the defence that these were political offences, saying that they were "so brutal, cowardly and callous that it would be a distortion of language if they were to be accorded the status of a political offence". Shannon was extradited but later acquitted.[53][54]

In 2015, Mitchel McLaughlin MLA was elected Speaker of the Northern Ireland Assembly. McLaughlin was the first Speaker elected from Sinn Féin whose leader, Gerry Adams, had said regarding the Stronge murders: "The only complaint I have heard from nationalists or anti-unionists is that he was not shot 40 years ago."[55]

Speaking during the debate on McLaughlin's election, Traditional Unionist Voice politician Jim Allister criticised the Democratic Unionist Party MLAs for voting to help elect McLaughlin as Speaker. He said "the next time they walk past the memorial to Sir Norman Stronge, may they hang their heads in shame."[56]