Kafr Yasif (Hebrew: כַּפְר יָסִיף‎; Arabic: كفر ياسيف‎‎, Kufr Yaseef) is an Arab town in the Northern District of Israel. It is located 11 kilometers (6.8 mi) northeast of the city of Acre and adjacent to Abu Sinan. The population of Kafr Yasif is largely Christian (57%) with a significant Muslim minority (40%), and a small Druze community.[3]

Many ancient remains have been excavated at Kafr Yasif, including mosaic floors, Corinthian columns, and cisterns cut in rock.[4] Kafr Yasif appears in the writings of the Roman Jewish historian Josephus Flavius.

During the Crusader -era in Palestine, it was known as Cafresi, Cafriasif,[5] or Cafriasim.[6] In 1193, Queen Isabella I and her spouse Henry of Champagne granted the casale of Kafr Yasif to prior Heinrich of the Teutonic Knights.[7] In the 13th century it was inhabited by Christians and paid tithes to the Bishop of Acre.[8] In 1257 Kafr Yasif appears in a document relating to a disagreement between the Bishop of Acre and the Teutonic Knights about its income.[9]

At one point it was a casale of the Knights Hospitallers.[6] It was described as part of the domain of the Crusaders during the hudna ("truce") between the Crusaders based in Acre and the Mamluk sultan al-Mansur Qalawun in 1283.[10] No Crusader remains have yet been identified in the village.[5]

In the 1740s ten Jewish households under the spiritual leadership of Rabbi Soloman Abadi settled in Kafr Yasif and were joined by a number of other Jews leaving Safad in the early 1760s as a result of the 1759 earthquake. According to Jewish travelers, the Jews in Kafr Yasif lived well under the auspices of Zahir al-Umar, the autonomous Arab ruler of the Galilee (1730-1775), whose tolerance had allowed for the initial establishment of the village's Jewish community.[14]

A map by Pierre Jacotin from Napoleon's invasion of 1799 showed the place, named as Koufour Youcef.[15]

In 1838 Kafr Yasif was classified as having a Greek Orthodox Christian majority with Muslim and Druze minorites.[16] In 1880 the village had a population of about 600, of which 500 were Greek Orthodox Christians and 100 were Muslims. A 17th-century church was located in the village and it contained a number of pictures given by Russia. The village contained a stone-cut well stone reservoirs and troughs.[17][18][19][20] According to the Palestine Exploration Fund's Survey of Western Palestine, Kafr Yasif was a stone-built village surrounded by olive groves and arable land, and provided with water from cisterns. The population consisted of 300 Christians, who worshiped at the Greek Orthodox chapel, and 50 Druzes.[19]

In the 1922 census of Palestine conducted by the British Mandate authorities Kufr Yasif had a population of 870 residents; 172 Muslims, 665 Christians and 33 Druze.[21] On 1 December 1925 Kafr Yasif became one of the few Arab villages in the Galilee to receive local council status during the British mandate period. Yani Kustandi Yani served as mayor from 1933 to 1948.[22] Kafr Yasif's population was recorded as 1,057 in the 1931 census of Palestine.[23]

In April 1938, during the Arab revolt in Palestine, a group of Palestinian Arab rebels planted a mine on the road near Kafr Yasif which blew up a British military vehicle, killing nine soldiers. The British Army proceeded to start burning Kafr Yasif in retaliation, but were then told by the residents that Kuwaykat's inhabitants were responsible for the attack. Eight mostly civilian men were killed in Kuwaykat afterward.[24] Between 14–17 February 1939 the British Army burned down 68-72 mostly-Muslim owned houses (and a small number of Christian and Druze homes) in response to another mine attack on British soldiers driving on a newly constructed security road which resulted in the death of one soldier and the injury of two others. When some of Kuwaykat's residents came to observe the destruction in Kafr Yasif, nine of their men were shot dead as they approached the village.[24] It was later discovered the attackers were not from Kafr Yasif. In compensation, the town was rebuilt with a school and a city hall which are still in use.[3][25] According to the Anglican Chaplain, "The people at Kafr Yasif were very eager to point out that the troops who destroyed their houses were not English but Irish."[25]

On 8–14 July 1948, during the 1948 Arab-Israeli War, Kafr Yasif was occupied by the Carmeli Brigade and the 7th Armored Brigade as part of the first stage of Operation Dekel.[30] Unlike many captured Arab towns, the majority of the population did not flee, and about 700 inhabitants of nearby villages, especially al-Birwa, al-Manshiyya and Kuwaykat, took refuge there. On 28 February 1949, most of them were put into trucks and driven to the front lines, where they were forced to cross the frontier border into Lebanon."[31][32] On March 1, another 250 refugees were deported.[33] Knesset member Tawfik Toubi strongly protested these expulsions.[34]

Kafr Yasif is one of the few Arab towns in the Galilee that retained most of its land it held before 1948.[35] Of 673 hectares owned in 1945, 458 hectares remained in 1962, with 76 hectares expropriated in 1952–3.[36] On 5 June 1951 the local council was reactivated by the Israeli government in the only example of an Arab local council that continuously existed after 1948.[22] In the first elections, held in 1954, the former mayor Yani Yani was re-elected mayor as head of a Communist Party and Nationalist Group (Kafr Yassif List) coalition, defeating the Mapai candidate.[37] He remained in office until his death in 1962.[22] Yani became leader of the Arab Popular Front which evolved into the Al Ard movement. The APF campaigned for the protection of Waqf properties in Israel.[38] In 1972–73, Violet Khoury was elected mayor of Kafr Yasif, making her the first Arab woman to head a local council in Israel.[39] The population remained under Martial Law until 1966.

The first meeting of the Congress of Druze Intellectuals was held in Kafr Yasif on 26 August 1966. The initiative behind the formation of the congress came from the youth of Druze villages in the Galilee led by Salman Faraj. When the Druze leadership in the Department of Minority Affairs gained knowledge of the congress's planned meeting and failed to persuade Faraj to postpone it, the spiritual head of the Druze community, Sheikh Amin Tarif, locked the gates of the al-Khadr Shrine, where the meeting was to be held. The congress was instead held in a nearby house in the town and one of the clauses of the summit was the expression of Druze solidarity with the other Arab communities of Israel.[40]

Kafr Yasif was the site of the first major violent incident between Christians and Druze in Israel on 11 April 1981. The clash began during a football match between fans of the town's local team and that of the nearby Druze village of Julis where a young man from Julis was fatally stabbed by a Christian from Kafr Yasif. Although reconciliation talks were immediately arranged to prevent further violence, the local council of Kafr Yasif refused to give up the name of the alleged killer. Hundreds of Druze youths from Julis subsequently entered Kafr Yasif, prompting the mayor to call for emergency back-up from the regional Israeli Police, a request which was denied. On 13 April about 60 armed police officers positioned themselves in the field between the two villages, and while a sulha (traditional Arab peace agreement) was being negotiated,[41][42] a group of heavily armed Julis residents stormed the town, burning down 85 houses, 17 stores, a few workshops and 31 cars. A church was also damaged.[41] By the end of the attack three residents of Kafr Yasif were shot dead and more were wounded. The police did not intervene, with some officers claiming they were not sufficiently armed. None of the attackers, which according to witnesses included some off-duty Druze soldiers from the Israeli Army, were arrested.[43] Most of the compensation for the damage came from the Muslim waqf of Israel and a smaller portion from the World Council of Churches.[44] 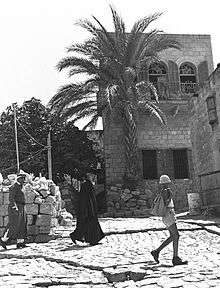 It is popular belief that the tomb of the monotheistic saint, al-Khadr is located in Kafr Yasif. The site is especially venerated by the Druze, some of whom make annual pilgrimages to the tomb on January 25. The structure is composed of a large convention hall adjacent to the tomb, along with rooms and courtyards that serve both pilgrims and other visitors.[49] Al-Khadr is the Arabic name for Saint George in Christianity. There are four churches and two mosques in the town. The main bishop of the town's Orthodox Christian community is Atallah Makhouli.

Kafr Yasif also has one of the oldest schools in the country, Yanni High School.