This article is about the religious endowment. For the Armenian village, see Vakıflı.

A waqf, also spelled wakf (Arabic: وقف‎‎, pronounced [ˈwɑqf]; plural Arabic: أوقاف‎‎, awqāf; Turkish: vakıf, Urdu: وقف‎[1]), or mortmain property, is, under the context of charity "sadaqah", an inalienable religious endowment in Islamic law, typically donating a building or plot of land or even cash for Muslim religious or charitable purposes with no intention of reclaiming the assets.[2] The donated assets may be held by a charitable trust. The grant is known as mushrut-ul-khidmat, while a person making such dedication is known as wakif, a donor.[3][4] In Ottoman Turkish law, and later under the British Mandate of Palestine, the waqf was defined as usufruct State land (or property) of which the State revenues are assured to pious foundations.[5] Although based on several hadiths and presenting elements similar to practices from pre-Islamic cultures, it seems that the specific full-fledged Islamic legal form of endowment called waqf dates from the 9th century CE (see paragraph "History and location").

The term waqf literally means "confinement and prohibition" or causing a thing to stop or stand still.[6] The legal meaning of Waqf according to Imam Abu Hanifa, is the detention of a specific thing in the ownership of waqf and the devoting of its profit or products "in charity of poors or other good objects".

Imam Abu Yusuf and Muhammad say: Waqf signifies the extinction of the waqif's ownership in the thing dedicated and detention of all the thing in the implied ownership of God, in such a manner that its profits may revert to or be applied "for the benefit of Mankind".

Bahaeddin Yediyıldız defines the waqf as a system which comprises three elements: hayrat, akarat and waqf. Hayrat, the plural form of hayr, means “goodnesses” and refers to the motivational factor behind vakıf organization; akarat refers to corpus and literally means ”real estates” implying revenue-generating sources, such as markets (bedestens, arastas, hans, etc.), land, baths; and waqf, in its narrow sense, is the institution(s) providing services as committed in the vakıf deed such as madrasas, public kitchens (imarets), karwansarays, mosques, libraries, etc.[7]

There is no direct injunction of the Qur'an regarding Waqf, which is derived from a number of hadiths (traditions of Muhammad). One says, "Ibn Umar reported, Umar Ibn Al-Khattab got land in Khaybar, so he came to the prophet Muhammad and asked him to advise him about it. The Prophet said, 'If you like, make the property inalienable and give the profit from it to charity.'" It goes on to say that Umar gave it away as alms, that the land itself would not be sold, inherited or donated. He gave it away for the poor, the relatives, the slaves, the jihad, the travelers and the guests. And it will not be held against him who administers it if he consumes some of its yield in an appropriate manner or feeds a friend who does not enrich himself by means of it.[8]

In another hadith, Muhammad said, "When a man dies, only three deeds will survive him: continuing alms, profitable knowledge and a child praying for him."[9]

Islamic law puts several legal conditions on the process of establishing a waqf.

A waqf is a contract, therefore the founder (called al-wāqif or al-muḥabbis in Arabic) must be of the capacity to enter into a contract. For this the founder must:

Although waqf is an Islamic institution, being a Muslim is not required to establish a waqf, and dhimmis may establish a waqf. Finally if a person is fatally ill, the waqf is subject to the same restrictions as a will in Islam.[10]

The property (called al-mawqūf or al-muḥabbas) used to found a waqf must be objects of a valid contract. The object should not be illegal in Islam (e.g. wine or pork). Finally these objects should not already be in the public domain. Thus, public property cannot be used to establish a waqf. The founder cannot also have pledged the property previously to someone else. These conditions are generally true for contracts in Islam.[10]

The property dedicated to waqf is generally immovable, such as estate. All movable goods can also form waqf, according to most Islamic jurists. The Hanafis, however, also allow most movable goods to be dedicated to a waqf with some restrictions. Some jurists have argued that even gold and silver (or other currency) can be designated as waqf.[10]

There is dispute over whether the founder himself can reserve exclusive rights to use waqf. Most scholars agree that once the waqf is founded, it can't be taken back.

The declaration of founding is usually a written document, accompanied by a verbal declaration, though neither are required by most scholars. Whatever the declaration, most scholars (those of the Hanafi, Shafi'i, some of the Hanbali and the Imami Shi'a schools) hold that it is not binding and irrevocable until actually delivered to the beneficiaries or put in their use. Once in their use, however, the waqf becomes an institution in its own right.[10] 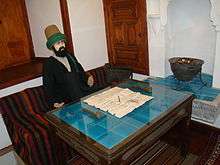 The administrator, like other persons of responsibility under Islamic law, must have capacity to act and contract. In addition, trustworthiness and administration skills are required. Some scholars require that the administrator of this Islamic religious institution be a Muslim, though the Hanafis drop this requirement.[10]

Waqf is intended to be perpetual and last forever. Nevertheless, Islamic law envisages conditions under which the waqf may be terminated:[10]

The practices attributed to Muhammad have promoted the institution of waqf from the earliest part of Islamic history.[11]

The two oldest known waqfiya (deed) documents are from the 9th century, while a third one dates from the early 10th century, all three within the Abbasid Period. The oldest dated waqfiya goes back to 876 CE, concerns a multi-volume Qur'an edition and is held by the Turkish and Islamic Arts Museum in Istanbul. A possibly older waqfiya is a papyrus held by the Louvre Museum in Paris, with no written date but considered to be from the mid-9th century. The next oldest document is a marble tablet whose inscription bears the Islamic date equivalent to 913 CE and states the waqf status of an inn, but is in itself not the original deed; it is held at the Eretz Israel Museum in Tel Aviv.[12]

The earliest pious foundations in Egypt were charitable gifts, and not in the form of a waqf. The first mosque built by 'Amr ibn al-'As is an example of this: the land was donated by Qaysaba bin Kulthum, and the mosque's expenses were then paid by the Bayt al-mal. The earliest known waqf, founded by financial official Abū Bakr Muḥammad bin Ali al-Madhara'i in 919 (during the Abbasid period), is a pond called Birkat Ḥabash together with its surrounding orchards, whose revenue was to be used to operate a hydraulic complex and feed the poor.

Early references to Wakf in India, can be found in 13th century CE work, Insba-i-Mahru by Aynul Mulk Mulltani, described by historian Ziauddin Barani as one of the officers of Jalal ud din Firuz Khilji (r. 1290-1296) first Indian ruler of the Delhi sultanate and the founder of the Khilji dynasty. According to the book, Sultan Muizuddin Sam Ghaor (f. 1195–95 A.D.) dedicated two villages in favor of Jama Masjid, Multan, and, handed its administration to the Shaikhul Islam (highest ecclesiastical officer of the Empire). In the coming years, several more wakfs were created, as the Delhi Sultanate flourished.[13]

As per Wakf Act 1954 (later Wakf Act 1995 ) enacted by Government of India, Wakfs are categorized as (a) Wakf by user such as Graveyards, Musafir Khanas (Sarai) and Chowltries etc., (b) Wakf under Mashrutul-khidmat (Service Inam) such as Khazi service, Nirkhi service, Pesh Imam service and Khateeb service etc., and (c) Wakf Alal-aulad is dedicated by the Donor (Wakif) for the benefit of their kith and kin and for any purpose recognised by Muslim law as pious, religious or charitable. After the enactment Wakf Act 1954, the Union government directed to all the states governments to implement the Act for administering the wakf institutions like mosques, dargah, ashurkhanas, graveyards, takhiyas, iddgahs, imambara, anjumans and various religious and charitable institutions.[14] A statutory body under Government of India, which also oversees State Wakf Boards.[15] In turn the State Wakf Boards work towards management, regulation and protect the Wakf properties by constituting District Wakf Committees, Mandal Wakf Committees and Committees for the individual Wakf Institutions.[14] As per the report of Sachar Committee (2006) there are about 500,000 registered Wakfs with 600,000 acres (2,400 km2) land in India, and Rs. 60 billion book value.[16][17]

The waqf institutions were not popular in all parts of the Muslim world. In West Africa, very few examples of the institution can be found, and were usually limited to the area around Timbuktu and Djenné in Massina Empire. Instead, Islamic west African societies placed a much greater emphasis on non-permanent acts of charity. According to expert Illife, this can be explained by West Africa's tradition of "personal largesse." The imam would make himself the collection and distribution of charity, thus building his personal prestige.[18]

According to Hamas, all of historic Palestine is an Islamic waqf, which translates as a "prohibition from surrendering or sharing".[19]

Funding of schools and hospitals 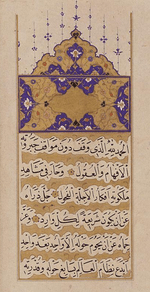 After the Islamic waqf law and madrassah foundations were firmly established by the 10th century, the number of Bimaristan hospitals multiplied throughout Islamic lands. By the 11th century, many Islamic cities had several hospitals. The waqf trust institutions funded the hospitals for various expenses, including the wages of doctors, ophthalmologists, surgeons, chemists, pharmacists, domestics and all other staff, the purchase of foods and medicines; hospital equipment such as beds, mattresses, bowls and perfumes; and repairs to buildings. The waqf trusts also funded medical schools, and their revenues covered various expenses such as their maintenance and the payment of teachers and students.[20]

The waqf in Islamic law, which developed in the medieval Islamic world from the 7th to 9th centuries, bears a notable resemblance to the English trust law.[21] Every waqf was required to have a waqif (founder), mutawillis (trustee), qadi (judge) and beneficiaries.[22] Under both a waqf and a trust, "property is reserved, and its usufruct appropriated, for the benefit of specific individuals, or for a general charitable purpose; the corpus becomes inalienable; estates for life in favor of successive beneficiaries can be created" and "without regard to the law of inheritance or the rights of the heirs; and continuity is secured by the successive appointment of trustees or mutawillis."[23]

The only significant distinction between the Islamic waqf and English trust was "the express or implied reversion of the waqf to charitable purposes when its specific object has ceased to exist",[24] though this difference only applied to the waqf ahli (Islamic family trust) rather than the waqf khairi (devoted to a charitable purpose from its inception). Another difference was the English vesting of "legal estate" over the trust property in the trustee, though the "trustee was still bound to administer that property for the benefit of the beneficiaries." In this sense, the "role of the English trustee therefore does not differ significantly from that of the mutawalli."[25]

Personal trust law developed in England at the time of the Crusades, during the 12th and 13th centuries. The Court of Chancery, under the principles of equity, enforced the rights of absentee Crusaders who had made temporary assignments of their lands to caretakers. It has been speculated that this development may have been influenced by the waqf institutions in the Middle East.[26][27]