Lewis Morris (April 8, 1726 – January 22, 1798) was an American landowner and developer from Morrisania, New York. He signed the U.S. Declaration of Independence as a delegate to the Continental Congress from New York.

This Morris was the third to be named Lewis Morris, and was born on the family estate of Morrisania. He was the son of Lewis and Katrintje or Catherine (Staats) Morris. His great grandfather (Richard, died 1672) had immigrated to New York through Barbados after being part of Oliver Cromwell's army in the English Civil War of 1648. He purchased the first tract of land in the Bronx that became the basis for the Morrisania manor. When Richard and his young wife died, leaving behind an infant son named Lewis, it was Richard's brother, Colonel Lewis Morris, also of Barbados, who came to Morrisania to help manage the estate formerly belonging to his late-brother and now his infant nephew. Eventually the infant Lewis Morris (1671–1746) inherited the estate of his father after the death of his uncle, Col. Lewis Morris, and his wife, who were childless. This Lewis Morris married a woman named Isabella and then expanded and patented the estate and was also Governor of New Jersey.

When his father died in 1762, he inherited the bulk of the estate. A prominent land owner in colonial New York, Lewis was appointed as a judge of the Admiralty Court for the province in 1760. As the Revolution drew near, he resigned this post in 1774. He was elected to the Colonial Assembly in 1769. 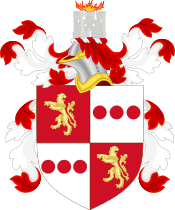 Coat of Arms of Gouverneur Morris

His eldest three sons served during the Revolutionary war, and had distinguished military careers.

When active revolution began, he was a member of the New York Provincial Congress (revolutionary government) from 1775 until 1777. That body, in turn, sent Morris to the Continental Congress for those same years.

In Congress, he was an active supporter of independence, and signed the Declaration of Independence in 1776. When warned by his half-brother, Gouverneur Morris, [1] of the consequences that would follow his signing of the rebellious document, Morris stated, "Damn the consequences. Give me the pen."

Lewis returned to New York in 1777, and was a member of the New York State Senate from 1777 to 1781 and again from 1783 to 1790. When the New York convention met to ratify the U.S. Constitution in 1788, he was one of the delegates. Morris was a Federalist presidential elector in 1796, and cast his votes for John Adams and Thomas Pinckney.

In 1784 Morris was elected an honorary member of the New York Society of the Cincinnati.

Morris had to rebuild the family estate after the Revolution, since it had been looted and burned by the British when they occupied New York. In 1790, he offered the land, now part of the South Bronx neighborhood of Morrisania as the site of the U.S. capital. He died on the estate, and is buried in the family vault beneath St. Ann's Church in the Bronx.[2]

Lewis and Isabella had several children including Lewis Morris, Jr. who married both Tryntje Staats and Sarah Gouverneur. Lewis Jr. had seven children by his two wives including Lewis the third, the subject of this entry. Lewis the third's siblings and half-siblings were named Staats Long Morris, Richard Morris, Mary Lawrence, Gouverneur Morris, Isabella and Catherine.

He was an ancestor of the Louisiana publisher Sarah Hudson-Pierce.[3]

Lewis Morris is portrayed by Ronald Kross in the 1969 Broadway musical 1776 and by Howard Caine in the 1972 film. Although Morris was chairman of the New York delegation to the Second Continental Congress, he abstained ("courteously") on every vote, claiming that the New York Provincial Congress never gave Morris explicit instructions on anything. However, when George Washington noted in a dispatch that Morris's estates were destroyed by the British, but his family was taken to safety in Connecticut, Morris abandons his lack of instructions and moves to sign the Declaration anyway.