For other people with the same name, see Thomas Nelson (disambiguation).

Thomas Nelson Jr. (December 26, 1738 – January 4, 1789) was an American planter, soldier, and statesman from Yorktown, Virginia. He represented Virginia in the Continental Congress and was its Governor in 1781. He is regarded as one of the U.S. Founding Fathers since he signed the Declaration of Independence as a member of the Virginia delegation. 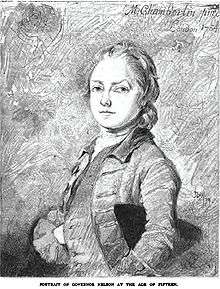 Nelson was the grandson of Thomas "Scotch Tom" Nelson, an immigrant from Cumberland, England, who was an early pioneer at Yorktown. His parents were Elizabeth (Burwell) and William Nelson, who was also a leader of the colony and briefly served as governor. Thomas was born at Yorktown, and like many Virginians of his time, was educated in England. He attended Newcome's School for six years and was at Eton in 1754, before entering Christ's College at Cambridge University in 1758.[1][2][3] He graduated in 1760 and returned home the following year. He helped his father with his farm at this time.

Thomas was first elected to the Virginia House of Burgesses in 1761. The following year he married Lucy Grymes (her maternal uncle was Peyton Randolph, a brother-in-law of Congressman Benjamin Harrison V; her paternal aunt was the mother of "Light Horse Harry" Lee). The couple would have eleven children altogether.[4] Their son Hugh Nelson (1768–1836) would later serve in the U.S. Congress.

Nelson's first term in the Congress continued until 1776, when a bout of illness forced his resignation. While a member of Congress, Nelson still found time to return home and play a key role in Virginia's Constitutional Convention in the spring of 1776. He returned to Congress in time to sign the Declaration of Independence.

Thomas Nelson was one of the thirteen committee members appointed in the Continental Congress on June 12, 1776, to “prepare and digest the form of confederation” which led to the Articles of Confederation, a very historic document.[5]

He was commanding General of the Lower Virginia Militia, and succeeded Thomas Jefferson as governor of Virginia (after William Fleming's nine days as acting governor). Nelson himself was engaged in the final siege of Yorktown. According to legend,[6][7] he urged General Washington (or, in some versions, the Marquis de Lafayette) to fire on his own home, the Nelson House, where Cornwallis had his headquarters, offering five guineas to the first man to hit his house.

He died at his son's home in Hanover County, Virginia and is buried in the Grace Churchyard at Yorktown.[8] Nelson was a member of Grace Church. This tribute was paid by Colonel Innes:

The illustrious General Thomas Nelson is no more! He paid the last great debt to nature, on Sunday, the fourth of the present month, at his estate in Hanover. He who undertakes barely to recite the exalted virtues which adorned the life of this great and good man, will unavoidably pronounce a panegyric on human nature. As a man, a citizen, a legislator, and a patriot, he exhibited a conduct untarnished and undebased by sordid or selfish interest, and strongly marked with the genuine characteristics of true religion, sound benevolence, and liberal policy. Entertaining the most ardent love for civil and religious liberty, he was among the first of that glorious band of patriots whose exertions dashed and defeated the machinations of British tyranny, and gave United America freedom and independent empire. At a most important crisis, during the late struggle for American liberty, when this state appeared to be designated as the theatre of action for the contending armies, he was selected by the unanimous suffrage of the legislature to command the virtuous yeomanry of his country; in this honourable employment he remained until the end of the war; as a soldier, he was indefatigably active and coolly intrepid; resolute and undejected in misfortunes, he towered above distress, and struggled with the manifold difficulties to which his situation exposed him, with constancy and courage. In the memorable year 1781, when the whole force of the southern British army was directed to the immediate subjugation of this state, he was called to the helm of government; this was a juncture which indeed 'tried men's souls.' He did not avail himself of this opportunity to retire in the rear of danger; but on the contrary, took the field at the head of his countrymen; and at the hazard of his life, his fame, and individual fortune, by his decision and magnanimity, he saved not only his country, but all America, from disgrace, if not from total ruin. Of this truly patriotic and heroic conduct, the renowned commander in chief, with all the gallant officers of the combined armies employed at the siege of York, will bear ample testimony; this part of his conduct even contemporary jealousy, envy, and malignity were forced to approve, and this, more impartial posterity, if it can believe, will almost adore. If, after contemplating the splendid and heroic parts of his character, we shall inquire for the milder virtues of humanity, and seek for the man, we shall find the refined, beneficent, and social qualities of private life, through all its forms and combinations, so happily modified and united in him, that in the words of the darling poet of nature, it may be said: His life was gentle: and the elements so mixed in him, that nature might stand up And say to all the world—this was a man.

The circa 1730 Nelson House built by "Scotch Tom" Nelson in Yorktown, Virginia, and occupied by Thomas Nelson Jr. during the Revolutionary War is a National Historical Landmark maintained by the Colonial National Historical Park of the U.S. National Park Service.

Thomas Nelson Jr. was a descendant of the Plantagenet house through Edward III of England.[11] His descendants live on currently in the nation he helped to found.