Italy after the dissolution of the Western Roman Empire in 476 and the successive barbarian invasions, up until the Italian unification in 1860, was a conglomeration of city-states, republics, and other independent entities. The following is a list of the various Italian states during that period. 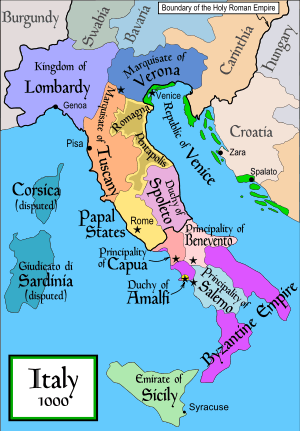 Political map of Italy in the year 1000. 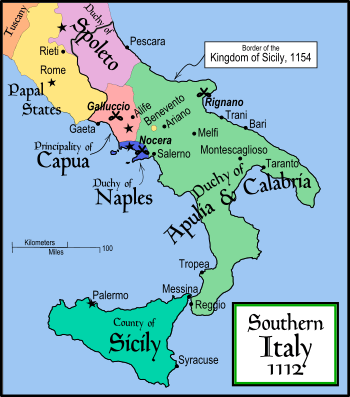 Political map of Southern Italy in the year 1112.

States of the Holy Roman Empire 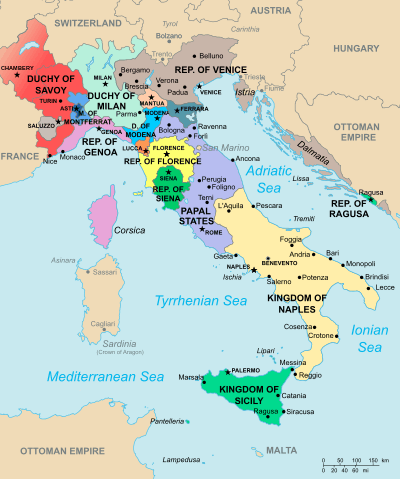 Italy in 1494, before the beginning of the Italian Wars. 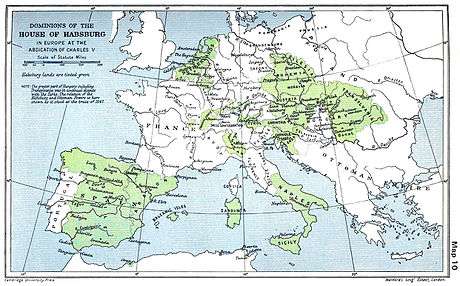 Dominions of the House of Habsburg in Europe, at the abdication of Charles V, map from the Cambridge Modern History Atlas, 1912.

The Peace of Cateau-Cambrésis was signed between Elizabeth I of England and Henry II of France on 2 April and between Henry II and Philip II of Spain on 3 April 1559, at Le Cateau-Cambrésis. Under its terms, France restored Piedmont and Savoy to the Duke of Savoy, and Corsica to the Republic of Genoa. More importantly, the treaty confirmed Spanish direct control of Milan, Naples, Sicily, Sardinia, and the State of Presidi, and indirectly (through dominance of the rulers of Tuscany, Genoa, and other minor states) of northern Italy. The Pope was also their natural ally. The only truly independent entities on Italian soil were the Duchy of Savoy and the Republic of Venice.

Political map of Italy in the year 1789 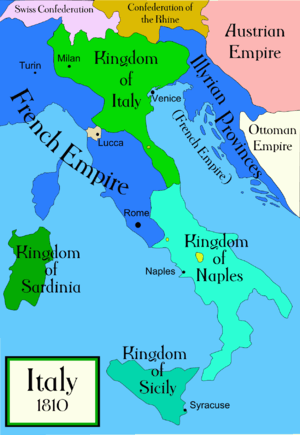 Political map of Italy in the year 1810.

From the Restoration to the Unification 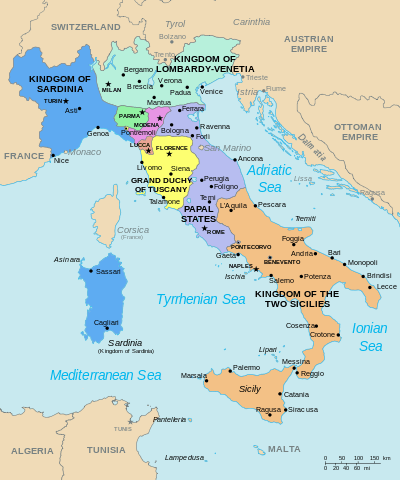 Political map of Italy in the year 1843.

Following the defeat of Napoleonic France, the Congress of Vienna (1815) was convened to redraw the European continent. In Italy, the Congress restored the pre-Napoleonic patchwork of independent governments, either directly ruled or strongly influenced by the prevailing European powers, particularly Austria. The Congress also determined the end of two millenary republics: Genoa was annexed by Sardinia, and Venice was incorporated with Milan into a new kingdom of the Austrian Empire. At the time, the struggle for Italian unification was perceived to be waged primarily against the Habsburgs, since they directly controlled the predominantly Italian-speaking northeastern part of present-day Italy and were, together, the most powerful force against unification. The Austrian Empire vigorously repressed nationalist sentiment growing on the Italian peninsula, as well as in the other parts of Habsburg domains.