The Italic peoples were an Indo-European ethnolinguistic group identified by speaking Italic languages. 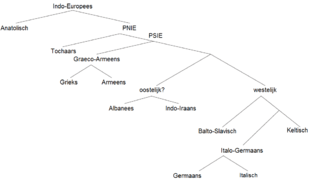 Indo-European language tree (diagram) according to Gray and Atkinson (2003); Italisch=Italic

The Italics were all the peoples who spoke an idiom belonging to the Italic branch of the Indo-European languages and had settled in the Italian peninsula. The first Italic tribes, the Latino-Falisci (or "Latino-Veneti", if the membership of the ancient Veneti is also accepted), entered Italy across the eastern Alpine passes into the plain of the Po River about 1200 BC. Later, they crossed the Apennine Mountains and eventually occupied the region of Latium, which included the area of Rome. Before 1000 BC, the Osco-Umbrians followed, which later divided into various groups and gradually moved to central and southern Italy.

The Italics were, therefore, the set of all Indo-Europeans present exclusively in Italy in antiquity, not Indo-European peoples who were present also in other areas of Europe, such as the Cisalpine Gauls (a Continental Celtic people) or the Messapians (related to the Illyrians).

The term is sometimes used improperly, especially in nonspecialised literature, to refer to all pre-Roman people of Italy, including those not of Indo-European lineages, such as the Etruscans, the Raetians and the Elymians. 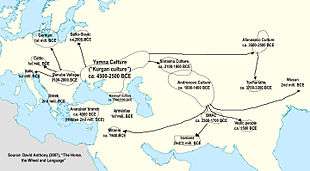 According to David W. Anthony between 3100-2800/2600 BCE, a real folk migration of Proto-Indo-European speakers from the Yamna culture took place into the Danube Valley. These migrations probably split-off Pre-Italic, Pre-Celtic and Pre-Germanic from Proto-Indo-European.[1] Hydronymy shows that Proto-Germanic homeland is in Central Germany which would be very close to the homeland of Italic and Celtic languages as well.[2]

The origin of a hypothetical ancestral "Italo-Celtic" people is to be found in today's eastern Hungary, "kurganized" around 3100 BC by the Yamna-culture. Subsequently, the Urnfield culture, also native of the Hungarian plain, expanding to the west would have brought this people in Bavaria and in Austria, where it evolved in the Proto-Celtic people, while the proto-Italic people would have formed from the "Italo-Celtic" tribes who remained in Hungary, then penetrating in Italy during the late 2nd millennium BC through the Proto-Villanovan culture.[3]

This hypothesis is to some extent supported by the observation that Italic shares a large number of isoglosses and lexical terms with Celtic and Germanic, some of which are more likely to be attributed to the Bronze Age.[4] In particular, using Bayesian phylogenetic methods, Russell Gray and Quentin Atkinson argued that proto-Italic speakers separated from proto-Germanic ones 5500 years before present, i.e. roughly the start of the Bronze Age.[5] This is further confirmed by the fact that Germanic language family shares more vocabulary with the Italic family than with the Celtic language family.[6]

Altar of Domitius Ahenobarbus known as the “Census frieze”. Marble, Roman artwork of the late 2nd century BCE. From the Campo Marzio, Rome 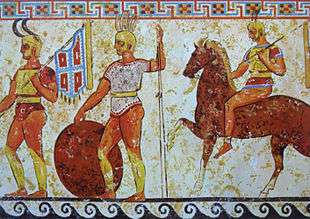 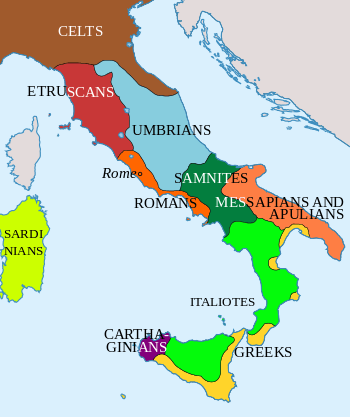 Remains of the later prehistoric age have been found in Liguria and Lombardy (stone carvings in Val Camonica). The most famous is perhaps that of Ötzi the Iceman, the mummy of a mountain hunter found in the Similaun glacier in South Tyrol, dating to c. 3300 BC. During the Copper Age, at the same time as metalworking appeared, Indo-European people migrated to Italy. Approximatively four waves of population from north to the Alps have been hypothesized on the basis of archaeological evidence.[8] The Remedello culture is associated by some with the first identified wave of Proto-Indo-Europeans who entered Italy and took over the Po Valley.[9]

From the late 3rd to the early 2nd millennium BC, tribes coming both from the north and from Franco-Iberia brought the Beaker culture[10] and the use of bronze smithing, in the Po Valley, in Tuscany and on the coasts of Sardinia and Sicily.

In the mid-2nd millennium BC, the Terramare culture[11] developed in the Po Valley. The Terramare culture takes its name from the black earth (terra marna) residue of settlement mounds, which have long served the fertilizing needs of local farmers. They were still hunters, but had domesticated animals; they were fairly skillful metallurgists, casting bronze in moulds of stone and clay, and they were also agriculturists, cultivating beans, the vine, wheat and flax. The Latino-Faliscan people have been associated with this culture, especially by the archaeologist Luigi Pigorini.

From the late 2nd millennium to the early 1st millennium BC, the Late Bronze Age Proto-Villanovan culture, related to the Central European Urnfield culture, dominated the peninsula and replaced the preceding Apennine culture. The Proto-Villanovans practiced cremation and buried the ashes of their dead in pottery urns of a distinctive double-cone shape. Generally speaking, Proto-Villanovan settlements have been found in almost the whole Italian peninsula from Veneto to eastern Sicily, although they were most numerous in the northern-central part of Italy. The most important settlements excavated are those of Frattesina in Veneto region, Bismantova in Emilia-Romagna and near the Monti della Tolfa, north of Rome. The Osco-Umbrians, the Veneti, and possibly the Latino-Faliscans too, have been associated with this culture.

In the 13th century BC, Proto-Celts (probably the ancestors of the Lepontii people), coming from the area of modern-day Switzerland, eastern France and south-western Germany (RSFO Urnfield group), entered Northern Italy (Lombardy and eastern Piedmont), starting the Canegrate culture, who not long time after, merging with the indigenous Ligurians, produced the mixed Golasecca culture.

In the south of the Tiber (Latium Vetus), the Latial culture of the Latins emerges, while in the north-east of the peninsula the Este culture of the Veneti appeared. Roughly in the same period, from their core area in central Italy (modern-day Umbria and Sabina region), the Osco-Umbrians began to emigrate in various waves, through the process of Ver sacrum, the ritualized extension of colonies, in southern Latium, Molise and the whole southern half of the peninsula, replacing the previous tribes, such as the Opici and the Oenotrians. This corresponds with the emergence of the Terni culture, which had strong similarities with the Celtic cultures of Hallstatt and La Tène.[12] The Umbrian necropolis of Terni, which dates back to the 10th century BC, was identical under every aspect, to the Celtic necropolis of the Golasecca culture.[13]