The Faroe Islands have a multi-party system, with numerous parties in which no one party often has a chance of gaining power alone, and parties must work with each other to form coalition governments.

There are two major ideological cleavages in Faroese politics. In addition to the left-right spectrum, parties are also divided between those that want to maintain the Faroes' place within the Danish Realm ('unionists') and those that want Faroese independence ('separatists').

The current government is formed by a coalition between the two major centre-right parties, the Union Party and the People's Party, and the small, centrist Centre Party and Self-Government Party.

Political parties with elected representation at a national level 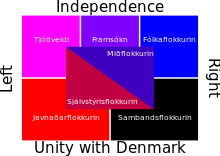 Schematic depiction of the political party spectrum in the Faroe Islands