General elections were held in Denmark on 18 June 2015 to elect the 179 members of the Folketing. 175 members were elected in Denmark proper, two in the Faroe Islands and two in Greenland.

The government had rocky relations with the Red–Green Alliance, relying on their ad hoc support to pass bills instead of a formalized alliance. They have occasionally preferred to cooperate with Venstre to pass legislation. Symbolically, Red–Green deputy Frank Aaen told Finance Minister Bjarne Corydon "Happy New Year" on 28 February 2013, because the government had failed to meet with his party since the beginning of 2013.[3]

The 179 members of the Folketing were elected in Denmark (175), the Faroe Islands (2) and Greenland (2). The 175 seats in Denmark included 135 seats elected in ten multi-member constituencies by proportional representation, using a modified version of the Sainte-Laguë method and Hare quota, and 40 "top-up" seats, allocated to parties in order to address any imbalance in the distribution of the constituency seats.[8]

According to the Danish Constitution, the election had to be held no later than 15 September 2015, as the last election was held on 15 September 2011. The Prime Minister was able to call the election at any date, provided it was no later than four years from the previous election, and this is often cited as a tactical advantage to the sitting government, as it can call an early election when polls are favourable. On 27 May Thorning-Schmidt announced that the elections would be held on 18 June 2015.[9] 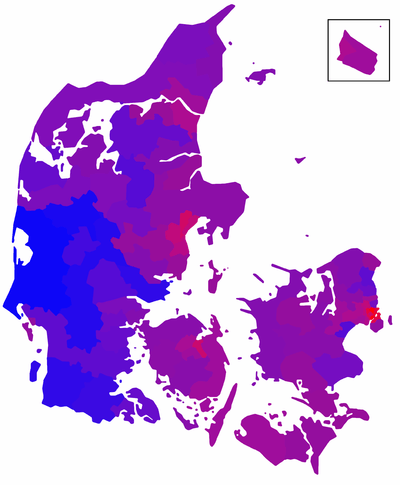 Although the Social Democrats increased their share of the vote and won more seats, the "Blue" opposition bloc led by Venstre's Rasmussen (Venstre, Danish People's Party, Liberal Alliance, Conservative People's Party, and Christian Democrats) gained a parliamentary majority over the "Red" Social Democrat-led bloc (Social Democrats, Red–Green Alliance, The Alternative, Social Liberals, and Socialist People's Party). Within an hour of the election result being declared, Thorning-Schmidt announced her government would step down on 19 June, and that she would also resign as party leader on the same day.[10]

In accordance with the Danish Constitution, on the day after the election each party submitted their recommendation to Queen Margrethe II for the appointment of a party to be in charge of government formation negotiations (the role of the Queen was purely formal, as her appointment had to reflect the will of the majority of the elected MPs). The submitted recommendations showed a parliamentary majority (all "blue bloc" parties) for Venstre to lead the process of government formation. The negotiation mandate was unconditional from all "blue bloc" parties, except Liberal Alliance, who initially made their support conditional on a first negotiation phase being restricted to the attempt to assemble a majority government (including all elected "blue bloc" parties). After Rasmussen had been granted this specific mandate, he invited such negotiations to begin on 20 June.[12]

Negotiations began on 20 June, but it was not thought likely that a majority government involving all the "blue bloc" parties was possible. The Conservative People's Party indicated they would rather stay out of a government coalition.[13]

The Danish People's Party set out four conditions for their involvement in a coalition: a Eurosceptic approach to the EU, the re-introduction of border controls, further restrictions on immigration and asylum policy, and 0.8% growth in public spending. Meanwhile, the Liberal Alliance also indicated willingness to be in a coalition, but the party supports reductions in public spending,[13] as does Venstre.[14]

On 21 June, Rasmussen concluded that, having tried, it would not be possible to form a majority government and he announced his intention to seek a new negotiation mandate allowing a minority government. On 28 June, Lars Løkke Rasmussen's new government assumed office with a cabinet composed solely of Venstre ministers.[15]