Regions of the Faroe Islands 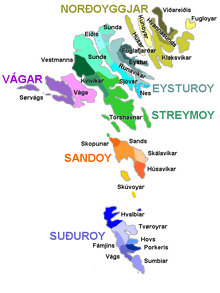 Sýslur and municipalities of the Faroes.

The Faroe Islands are divided into 30 municipalities, six regions/shires (sýsla, sýslur in plural) and since 2007 there has been only one constituency, earlier there were seven constituencies.[1][2] Each region has one sheriff (sýslumaður).

The regions are also used regarding pilot whale huntings, the sheriff decides if a pod of pilot whales can be killed or not, the boats need to get his permission before any slaughter can take place, and in some regions he also decides to which villages the whale meat and blubber should be given to. This is the case in Suðuroy, if men from the southern part of the island participate in a whale hunt, they are not sure to get any meat at all, if the sheriff decides, that there are too few whales in order to divide it to the whole island and can decide to give it only, for example, to the northern part or to specific villages or to homes for the elderly.