Hodges was born in Cascade,[2] Pittsylvania County, Virginia, on March 9, 1898, and moved with his family to Spray (which later merged with two other towns to become Eden, NC) when he was two years old, living much of his life there in Rockingham County, North Carolina. Hodges left for the University of North Carolina at Chapel Hill at age 17, and moved back to Eden after college. He then went to work at Carolina Cotton and Woolen Mills in Leaksville, which was later purchased by Marshall Field. He remained with the company, working his way up from millworker to executive positions, until he retired to enter politics. In 1923, he helped form the Leaksville Rotary Club, which later became known as the Eden Rotary. In the 1940s, he was appointed to the state Board of Education and the Highway and Public Works Commission. In 1945, he served as a consultant to the U.S. Secretary of Agriculture and to the U.S. Army in occupied Germany. 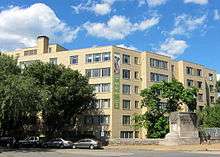 Hodges was elected the state's 22nd lieutenant governor in 1952 and succeeded to the position of governor in November 1954 upon the death of Governor William B. Umstead. Two years later, he was elected on his own to a four-year term as governor. Because North Carolina had a one-term limit for governors at that time, Hodges had the longest continuous tenure in the office until the state constitution was changed and Jim Hunt was elected to a second term in 1980 . During his time in office, Governor Hodges promoted industrialization and education, while opposing implementation of the US Supreme Court decision in Brown v. Board of Education (1954). Hodges backed various tactics to delay public school integration in North Carolina. He backed state legislation to suppress the NAACP. Research Triangle Park was established while he was governor. When he left his Washington post in 1965, he returned to Chapel Hill and was chairman of Research Triangle Park. In 1967, he served a one-year term as president of Rotary International.[3]

He died on October 6, 1974, in Chapel Hill, North Carolina, and is buried at the Overlook Cemetery in Eden, North Carolina. There is a monument in his honor near a water fountain in Eden's Freedom Park.