He served as the first United States Secretary of Commerce from 1913 to 1919 after the division of the Department of Commerce and Labor. Previously, Redfield served as a U.S. Representative from New York from 1911 to 1913 and was an unsuccessful Democratic nominee for the vice presidency in 1912. 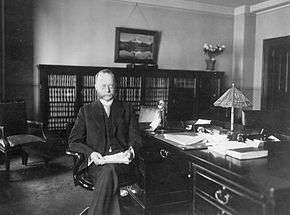