The university developed from mergers of various colleges with various specialisms, including Technology, Art and Design, i.e. Manchester Mechanics' Institution (1824) and Manchester School of Design (1838). Later, Schools of Commerce (founded 1889), Education (f. 1878) and Domestic Science (f. 1880) were added along with colleges at Didsbury, Crewe, Alsager and the former Domestic and Trades College (f. 1911), latterly Hollings College.

The painter L. S. Lowry attended Manchester School of Art in the years after the First World War where he was taught by the noted impressionist Adolphe Valette.[6] It became Manchester Polytechnic in 1970. On 1 January 1977, the polytechnic merged with the Didsbury College of Education and Hollings College, and on 1 January 1983 with City of Manchester College of Higher Education. In 1987 the institution became a founding member of the Northern Consortium. Having previously been a local authority institution, the polytechnic became a corporate body on 1 April 1989, as allowed by the terms of the Education Reform Act 1988.

It was granted university status as "Manchester Metropolitan University" by the Privy Council on 15 September 1992 under the provisions of the Further and Higher Education Act 1992. The university absorbed Crewe and Alsager College of Higher Education on 1 October 1992 and the Manchester School of Physiotherapy in 2004.[8]

The School was officially formed in 1991, through the amalgamation of the Manchester Royal Infirmary (M.R.I.) and the Withington Hospital Schools of Physiotherapy. From these two institutions it can date its history back to 1911 and during the 1980s via its M.R.I. routes, became the first NHS School of Physiotherapy to offer a three-year undergraduate honours degree programme.[8] The Manchester School of Physiotherapy was based at the Manchester Royal Infirmary and from 1993, was housed within purpose built accommodation converted from the hospital's former outpatient department. The academic building consisted of two large raked lecture theatres, a number of practical rooms, a gymnasium, seminar rooms, a library, office facilities and a student common room.

The final cohort of Manchester School of Physiotherapy students graduated in 2005, with their degrees being conferred by the University of Manchester. 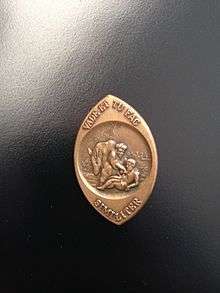 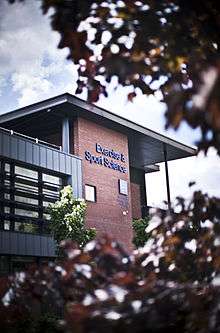 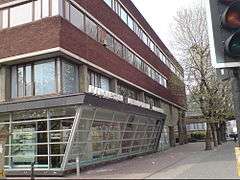 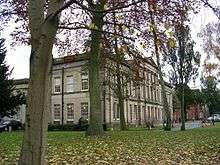 The administration building of the Didsbury Campus

The university was previously located on seven sites, five in Manchester (All Saints, Aytoun, Didsbury, Elizabeth Gaskell, and Hollings) and two in Cheshire (Alsager and Crewe), and has rationalised its estate, reducing the number of sites to two. The university has moved the work of the Alsager campus to Crewe. The Aytoun campus closed in 2012 when a new Business School opened on the All Saints Campus. Since 2011, the university has been engaged in a £350 million investment programme involving the largest physical change to its estate since its foundation. In 2014 the Elizabeth Gaskell, Hollings and Didsbury campuses were closed and the faculties moved to All Saints and the new Birley campus[11] 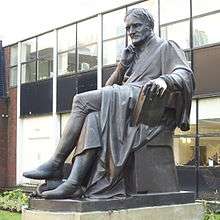 All Saints campus is one of the university's 2 campuses.

New premises costing £75 million for the Faculty of Business and Law have been built on All Saints Campus and the Business School re-located to this building from the Aytoun Campus in 2012.[19] It will house more than 5,000 students and 250 staff.[20] The new building is an original architectural concept with three towers under a single glass roof. Green credentials are an integral part of the building's design which incorporates solar panels and heat pumps to power the building and a rain water recycling scheme.[20] The Manchester Law School is in the Sandra Burslem building which opened in 2003.

The university library, renamed the Sir Kenneth Green Library, is on the All Saints campus. It houses a number of special collections mainly relating to the fine and applied arts, like the Laura Seddon Greeting Card Collection, a collection of 32,000 Victorian and Edwardian greeting cards.[21] The library is in the All Saints Building where it occupies three floors. It was planned as a single central library in 1972 but after the mergers with the Didsbury College of Education and Hollings College it became a central library and administrative centre for seven library sites. From 1975 a catalogue was produced with the aid of the Birmingham Libraries Co-operative Mechanisation Project.[22] From 1992 the library was part of the Consortium of Academic Libraries in Manchester (CALIM) which was extended in 2002 to become NoWAL, the North West Academic Libraries.[23] 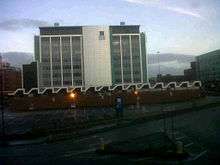 The Hollings Faculty offers undergraduate and postgraduate programmes in food, clothing, and hospitality studies and related fields. Formerly in Fallowfield, the faculty is now housed in the Righton Building on the All Saints campus, a former department store.

The second campus is based in Crewe, Cheshire. The Pro-Vice-Chancellor of the Cheshire campus is Professor Christine Horrocks. [24]

The Cheshire campus is home to over 2,000 students from around the world, supported by over 400 staff across 150 undergraduate and postgraduate courses in the arts, business, education, humanities and sport science. [25]

Academic staff regularly win Students’ Union teaching awards and departments on campus have numerous accreditations from professional bodies. [26][27]The strong regional, national and international links mean that graduates at the campus have had a wealth of opportunities to work with industry professionals, from Paralympic and Olympic athletes and artists to business leaders and high-profile practitioners in health, welfare and social care. [28][29][30][31]

MMU announced on Friday 25th November 2016 following a board meeting it looked to close the Crewe campus by summer 2019. The decision was made following a independent review conducted by financial advisory firm Deloitte, MMU cited a poor intake in students as a main reason for closure.[32][33]

2014 saw the opening of a highly environmentally sustainable £140 million development situated on the Birley Fields site in Hulme, Manchester, creating a central location for the Faculties of Education and Health following the closure of the Didsbury and Elizabeth Gaskell campuses. Alongside the academic building there is student accommodation for up to 1200 students comprising ultra-modern, environmentally sustainable townhouses and traditional student apartments.

The Board of Governors is responsible for broad policy but the Vice-Chancellor, along with the Executive and Directorate, is responsible for overall management, policy implementation, organisation, operations and direction of the University.[36]

The University is organised into eight faculties:

The Manchester School of Theatre is a drama school, which trains students to become professional actors. The course offered is a BA (Hons) in Acting. The school is a member of Drama UK, which means the course is a nationally acclaimed programme. Students who complete the course successfully are eligible for full Equity status. The school has links with many local theatres and television companies, such as Granada and the BBC. Graduates from the school of theatre include Amanda Burton, Steve Coogan, Richard Griffiths, Graham Fellows, Julie Walters and Burn Gorman.

UCAS statistics show that the University received 58,752 applications in 2011 and granted places to 9,083 students.[47] Its student population stands at 35,165[48] and The Complete University Guide shows that the University has a ratio of enrolled male to female students standing at 42:58.[49]

The University admits undergraduate students who have achieved a broad range of UCAS tariff points, with an average of 343.7[50]

In terms of academic rigour, in 2012 government statistics show 0.5% of students gaining a First Class Honours degree, 35% gaining a 2:1, 5% gaining a 2:2, and 55% gaining a 3rd or a pass.[51] According to The Complete University Guide's teaching quality inspections, the publication places the university within the top 20 in the UK. [52] The university is also ranked fourth of the new universities in attracting research funds from the Higher Education Funding Council for England.[52]

The students' union has buildings on both campuses. The Students' Union exists to represent all members at the Manchester Metropolitan University and students on accredited external courses. The union is controlled by the Union Officers Group formed of six students and recent graduates of the university, elected by the students to control the Union on their behalf. A shop especially designed to cater to the university students has also been set up inside the Students' Union.

The students' union will be moving, in January 2015, to a new purpose built building on Higher Cambridge Street, next to Cambridge and Cavendish Halls of Residence.

In the Netherlands, Radboud University Nijmegen

This partial list of alumni of Manchester Metropolitan University includes some who attended institutions which became part of present-day MMU.