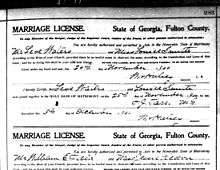 Marriage License from the State of Georgia

A marriage license is a document issued, either by a church or state authority, authorizing a couple to marry. The procedure for obtaining a license varies between countries and has changed over time. Marriage licenses began to be issued in the Middle Ages, to permit a marriage which would otherwise be illegal (for instance, if the necessary period of notice for the marriage had not been given).

Today, they are a legal requirement in some jurisdictions and may also serve as the record of the marriage itself, if signed by the couple and witnessed.

Article 16 of the Universal Declaration of Human Rights declares that "Men and women of full age, without any limitation due to race, nationality or religion, have the right to marry and to found a family. They are entitled to equal rights as to marriage, during marriage and at its dissolution. Marriage shall be entered into only with the free and full consent of the intending spouses."[1]

For most of Western history, marriage was a private contract between two families. Until the 16th-century, Christian churches accepted the validity of a marriage on the basis of a couple’s declarations. If two people claimed that they had exchanged marital vows—even without witnesses—the Catholic Church accepted that they were validly married.

Some states in the US hold that public cohabitation can be sufficient evidence of a valid marriage. Marriage license application records from government authorities are widely available starting from the mid-19th century. Some are available dating from the 17th century in colonial America.[2] Marriage licenses have been required since 1639 in Massachusetts, with their use gradually expanding to other jurisdictions.[3]

A requirement for banns of marriage was introduced to England and Wales by the Church in 1215. This required a public announcement of a forthcoming marriage, in the couple's parish church, for three Sundays prior to the wedding and gave an opportunity for any objections to the marriage to be voiced (for example, that one of the parties was already married or that the couple was related within a prohibited degree), but a failure to call banns did not affect the validity of the marriage.

Marriage licences were introduced in the 14th century, to allow the usual notice period under banns to be waived, on payment of a fee and accompanied by a sworn declaration, that there was no canonical impediment to the marriage. Licences were usually granted by an archbishop, bishop or archdeacon. There could be a number of reasons for a couple to obtain a licence: they might wish to marry quickly (and avoid the three weeks' delay by the calling of banns); they might wish to marry in a parish away from their home parish; or, because a licence required a higher payment than banns, they might choose to obtain one as a status symbol.

There were two kinds of marriage licences that could be issued: the usual was known as a common licence and named one or two parishes where the wedding could take place, within the jurisdiction of the person who issued the license. The other was the special licence, which could only be granted by the Archbishop of Canterbury or his officials and allowed the marriage to take place in any church.

To obtain a marriage licence, the couple, or more usually the bridegroom, had to swear that there was no just cause or impediment why they should not marry. This was the marriage allegation. A bond was also lodged with the church authorities for a sum of money to be paid if it turned out that the marriage was contrary to Canon Law. The bishop kept the allegation and bond and issued the licence to the groom, who then gave it to the vicar of the church where they were to get married. There was no obligation for the vicar to keep the licence and many were simply destroyed. Hence, few historical examples of marriage licences, in England and Wales, survive. However, the allegations and bonds were usually retained and are an important source for English genealogy.

Hardwicke's Marriage Act 1753 affirmed this existing ecclesiastical law and built it into statutory law. From this date, a marriage was only legally valid, if it followed the calling of banns in church or the obtaining of a licence —the only exceptions being Jewish and Quaker marriages, whose legality was also recognized. From the date of Lord Hardwicke's Marriage Act up to 1837, the ceremony was required to be performed in a consecrated building.

Since 1 July 1837, civil marriages have been a legal alternative to church marriages under the Marriage Act 1836, which provided the statutory basis for regulating and recording marriages. So, today, a couple has a choice between being married in the Anglican Church, after the calling of banns or obtaining a licence or else, they can give "Notice of Marriage" to a civil registrar. In this latter case, the notice is publicly posted for 15 days, after which a civil marriage can take place. Marriages may take place in churches other than Anglican churches, but these are governed by civil marriage law and notice must be given to the civil registrar in the same way. The marriage may then take place without a registrar being present if the church itself is registered for marriages and the minister or priest is an Authorised Person for marriages.

The licence does not record the marriage itself, only the permission for a marriage to take place. Since 1837, the proof of a marriage has been by a marriage certificate, issued at the ceremony; before then, it was by the recording of the marriage in a parish register.

Marriage law and practice in Scotland differs from that in England and Wales. Historically, it was always considered legal and binding for a couple to marry by making public promises, without a formal ceremony but this form has not been available since 1940. More recently "marriage by cohabitation with repute" has also been abolished for any relationship commenced since 2006. Church marriages "without proclamation" are somewhat analogous to the English "marriages by licence", although the permission to perform them is not a church matter. Religious marriages in Scotland have never had a restriction on the place in which they are performed. Marriages in Scotland normally require between 2 and 6 weeks’ notice to the district registrar depending on the previous marital status and other procedural matters usually involving the country of residence and the nationality of the parties. Marriages with less than the normal amount of notice require the permission of the Registrar General.

The specifications for obtaining a marriage license vary between states. In general, however, both parties must appear in person at the time the license is obtained; be of marriageable age (i.e., over 18 years; lower in some states with the consent of a parent); present proper identification (typically a driver's license, state ID card, birth certificate or passport; more documentation may be required for those born outside of the United States); and neither must be married to anyone else (proof of spouse's death or divorce may be required for someone who had been previously married in some states).

The US states of Florida, Connecticut, Wisconsin, Indiana, Oklahoma, Massachusetts, Mississippi, California, New York,[4][5] and the District of Columbia once required blood tests before issuing a marriage license, but such requirements have since been abolished.

Marriage licenses in the United States fall under the jurisdiction of the state in which the ceremony is performed; however, the marriage is generally recognized across the country. The state in which they are married holds the record of that marriage. Traditionally, working with law enforcement was the only means of searching and accessing marriage license information across state lines.[6]

Controversy in the USA

Some groups and individuals believe that the requirement to obtain a marriage license is unnecessary or immoral. The Libertarian Party, for instance, believes that marriage should be a matter of personal liberty, not requiring permission from the state.[7][8] Individuals that align with this libertarian stance argue that marriage is a right, and that by allowing the state to exercise control over marriage, it falsely presupposes that we merely have the privilege, not the right, to marry. As an example of a right (as opposed to a privilege), those that are born in the US receive a birth certificate (certifying that they have been born), not a birth license (which would give them license so they could be born). Some Christian groups also argue that a marriage is a contract between a man and a woman presided over by God, so no authorization from the state is required. Some US states have started citing the state specifically as a party in the marriage contract[9] which is seen by some as an infringement.[10]

Marriage licenses have also been the subject of controversy for affected minority groups. California's Proposition 8 has been the subject of heavy criticism by advocates of same-sex marriage,[11] including the lesbian, gay, bisexual, and transgender (LGBT) community whose ability to marry is often limited by the aforementioned state intervention. This changed on June 26, 2015, with the Supreme Court decision in Obergefell v. Hodges. However, the state and federal intervention still continues to limit the ability of members of other minority religious groups from marrying according to the dictates of their religious tenets, as is the case with Islamic polygamy, for example. Polyamorous and polyandrous marriages are, likewise, still prohibited.[12]

In October 2009, Keith Bardwell, a Louisiana justice of the peace, refused to issue a marriage license to an interracial couple, prompting civil liberties groups, such as the NAACP and ACLU, to call for his resignation or firing.[13][14] Bardwell resigned his office on November 3.[15]

In the state of Pennsylvania, self-uniting marriage licenses are available which require only the signatures of the bride and groom and witnesses. Although this is an accommodation for a Quaker wedding, any couple is able to apply for it.

The Netherlands and Belgium

In the Netherlands and Belgium, couples intending to marry are required to register their intention beforehand, a process called "ondertrouw".

In Mexico, only civil marriage is recognized as legal. Persons wishing to do so may also have a religious ceremony, but it has no legal effect and does not replace in any way the legal binding civil marriage. A civil wedding in Mexico is fully valid for legal purpose in the U.S. The Mexican civil registry does not issue marriage licences, it issues marriage certificates, because under Latin law, marriage is a legal right, not requiring a permit, marriages are performed without charge at the premises of the "Registro Civil" at the municipality hall of most counties and state houses in Mexico.[16]