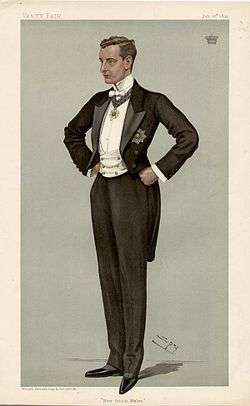 A caricature in Vanity Fair from 1899, showing a British peer wearing white tie

White tie, also called full evening dress, is the most formal evening dress code in Western fashion. For men, it consists of a black tailcoat worn over a white starched shirt, marcella waistcoat and the eponymous white bow tie worn around a detachable collar. High-waisted black trousers and patent leather shoes complete the outfit, although decorations can be worn and a top hat and white scarf are acceptable as accessories. Women wear full length evening or ball gown and, optionally, jewellery, tiaras, a small bag and evening gloves.

The dress code's origins can be traced to the end of the 18th century, when high society men began abandoning their breeches, lacy shirts and richly decorated evening coats for more austere tailcoats in dark colours, a look inspired by the country gentleman. Fashionable dandies like Beau Brummell popularised a minimalist style in the Regency era, tending to favour dark blue or black tailcoats, often with trousers instead of breeches, and white shirts, waistcoats and cravats. By the 1840s the minimalist black and white combination had become the standard evening wear for upper class men. Despite the emergence of the dinner jacket (or tuxedo) as a less formal and more comfortable alternative in the 1880s, full evening dress remained the staple. At the turn of the 20th century, white became the only colour of waistcoats and ties worn with full evening dress, contrasting with black ties and waistcoats with the dinner jacket, an ensemble which became known as black tie.

From the 1920s onward black tie slowly replaced white tie as the default evening wear for important events, so that by the 21st century white tie had become rare. White tie nowadays tends to be reserved for special ceremonies—especially state dinners—and a very select group of social events such as the Al Smith memorial Dinner in New York, the Commemoration balls at Oxford and Cambridge universities and very formal weddings. The Vienna State Opera and the Nobel Prize ceremony are white tie events, and some European universities retain it as the dress code for doctoral conferment ceremonies. 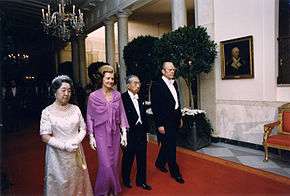 According to the British etiquette guide Debrett's, the central components of full evening dress for men are a white marcella shirt with a detachable wing collar and single cuffs, fastened with studs and cufflinks; the eponymous white marcella bow tie is worn around the collar, while a low-cut marcella waistcoat is worn over the shirt. Over this is worn a black single-breasted barathea wool or ultrafine herringbone tailcoat with silk peak lapels. The trousers have double-braiding down the outside of both legs, while the correct shoes are patent leather or highly polished black dress shoes. Although a white scarf remains acceptable in winter, the traditional white gloves, top hats, canes and cloaks are "now only seen on stage". Women wear a full-length evening dress, with the option of jewellery, a tiara, a pashmina, coat or wrap, and small evening bags. Long gloves are not compulsory.[1]

The waistcoat should not be visible below the front of the tailcoat, which necessitates a high waistline and (often) braces for the trousers. As one style writer for GQ magazine summarises "The simple rule of thumb is that you should only ever see black and white not black, white and black again".[2][3] While Debrett's accepts double cuffs for shirts worn with white tie,[1] some tailors and merchant suggest that single, linked cuffs are the most traditional and formal variation acceptable under the dress code.[4] Decorations may also be worn and, unlike Debrett's, Cambridge University's Varsity student newspaper suggests a top hat, opera cloak and silver-topped cane are acceptable accessories.[5] Some invitations to white-tie events, like the last published edition of the British Lord Chamberlain's Guide to Dress at Court, state that national costume or national dress may be substituted for white tie.[6][7] 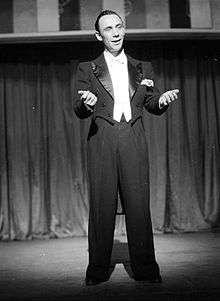 Throughout the Early Modern period, western European male courtiers and aristocrats donned elaborate clothing at ceremonies and dinners: coats (often richly decorated), frilly and lacy shirts and breeches formed the backbone of their most formal attire. As the 18th century drew to a close, high society began adopting more austere clothing which drew inspiration from the dark hues and simpler designs adopted by country gentlemen.[8] By the end of the 18th century, two forms of tail coat were in common use by upper class men in Britain and continental Europe: the more formal dress coat (cut away horizontally at the front) and the less formal morning coat, which curved back from the front to the tails. From around 1815, a knee-length garment called the frock coat became increasingly popular and was eventually established, along with the morning coat, as smart daywear in Victorian England. The dress coat, meanwhile, became reserved for wear in the evening.[9] The dandy Beau Brummell adopted a minimalistic approach to evening wear—a white waistcoat, dark blue tailcoat, black pantaloons and striped stockings.[10] Although Brummell felt black an ugly colour for evening dress coats, it was adopted by other dandies, like Charles Baudelaire, and black and white had become the standard colours by the 1840s.[11][12]

Over the course of the 19th century, the monotone colour scheme became a codified standard for evening events after 6pm in upper class circles.[8] The styles evolved and evening dress consisted of a black dress coat and trousers, white or black waistcoat, and a bow tie by the 1870s. The dinner jacket (tuxedo) emerged as a less formal and more comfortable alternative to full evening dress in the 1880s and, by the early 20th century, full evening dress meant wearing a white waistcoat and tie with a black tailcoat and trousers, the tuxedo incorporated a black bow tie and waistcoat: white tie had become distinct from black tie.[13] Despite its growing popularity, the dinner jacket remained the reserve of family dinners and gentlemen's clubs during the late Victorian period.[8]

Inter-war years and beyond 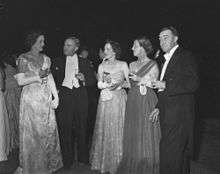 Guests at the white-tie Royal Ball in Brisbane, 1954

By the turn of the 20th century, full evening dress consisted of a black tailcoat made of heavy fabric weighing 16-18 oz per yard. Its lapels were medium width and the white shirt worn beneath it had a heavily starched, stiff front, fastened with pearl or black studs and either a winged collar or a type called a "poke", consisting of a high band with a slight curve at the front.[14] After World War I, the dinner jacket became more popular, especially in the US, and informal variations sprung up, like the soft, turn-down collar shirt and later the double-breasted jacket;[15] relaxing social norms in Jazz Age America meant white tie was replaced by black tie as the default evening wear for young men, especially at nightclubs.[8] According to The Delineator, the years after World War I saw white tie "almost abandoned".[16] But it did still have a place: the American etiquette writer Emily Post stated in 1922 that "A gentleman must always be in full dress, tail coat, white waistcoat, white tie and white gloves" when at the opera, yet she called the tuxedo "essential" for any gentleman, writing that "It is worn every evening and nearly everywhere, whereas the tail coat is necessary only at balls, formal dinners, and in a box at the opera."[17]

It also continued to evolve. White tie was worn with slim-cut trousers in the early 1920s; by 1926, wide-lapelled tailcoats and double-breasted waistcoats were in vogue.[18] The Duke of Windsor (then Prince of Wales and later Edward VIII) wore a midnight blue tailcoat, trousers and waistcoat in the 1920s and 1930s both to "soften" the contrast between black and white and allow for photographs to depict the nuances of his tailoring.[19] The late 1920s and 1930s witnessed a resurgence in the dress code's popularity,[16][20] but by 1953, one etiquette writer stressed that "The modern trend is to wear 'tails' only for the most formal and ceremonious functions, such as important formal dinners, balls, elaborate evening weddings, and opening night at the opera".[21]

White tie is rarely worn in the early 21st century.[1] When the Costume Institute Gala announced a white tie dress code in 2014, a number of media outlets pointed out the difficulty and expense of obtaining traditional white tie, even for the celebrity guests.[22][23] Nevertheless, it survives as the dress code for royal ceremonies, debutante balls, and a select group of other social events in some countries. The male form has also been adopted for some formal weddings.[1] In Britain, it is worn at some state dinners[24][25] and certain May and commemoration balls at Oxford and Cambridge universities as well as University College Durham.[26][27] It was the dress code for the Lord Mayor of London's Mansion House banquet until 1996,[28] although David Cameron has worn white tie to the event as Prime Minister.[29] In the US, white tie is worn at some state dinners, including the one held for Elizabeth II in 2007.[30] The Vienna Opera Ball[31] and the Nobel Prize ceremony in Sweden are white tie events;[32] in Scandinavia and the Netherlands, it is the traditional attire for doctoral conferments and is prescribed at some Swedish and Finnish universities, where it is worn with a doctoral hat.[33][34][35][36]

Military dress uniform is the appropriate military uniform for white tie occasions, though mess dress is also sometimes used, as not all nations have two distinct classes of formal evening uniforms. At hunt balls (run by fox hunting clubs), members who are entitled to do so may wear a scarlet tailcoat. This hunt attire is colloquially known as "drinking pinks", to distinguish it from the "pinks" intended to be worn while riding. A hunt ball invitation in America would generally specify the dress code as "black tie, or scarlet if convenient".

Certain clergymen wear, in place of white-tie outfits, a cassock with ferraiolone, which is a light-weight ankle-length cape intended to be worn indoors. The colour and fabric of the ferraiolone is determined by the rank of the cleric and can be scarlet watered silk, purple silk, black silk or black wool. For outerwear the black cape (cappa nigra), also known as a choir cape (cappa choralis), is most traditional. It is a long black woollen cloak fastened with a clasp at the neck and often has a hood. Cardinals and bishops may also wear a black plush hat or, less formally, a biretta. In practice, the cassock and especially the ferraiolone have become much less common and no particular formal attire has appeared to replace them. The most formal alternative is a clerical waistcoat incorporating a Roman collar (a rabat) worn with a collarless French cuff shirt and a black suit, although this is closer to "black-tie" than white-tie. Historically, clerics in the Church of England would wear a knee-length cassock called an apron, accompanied by a tailcoat with silk facings but no lapels, for a white tie occasion. In modern times this is rarely seen, however if worn the knee-length cassock is now replaced with normal dress trousers.