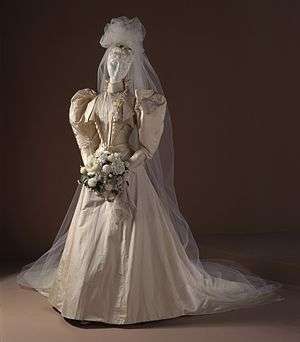 A wedding dress or wedding gown is the clothing worn by a bride during a wedding ceremony. Color, style and ceremonial importance of the gown can depend on the religion and culture of the wedding participants. In Western cultures, brides often choose white wedding dress, which was made popular by Queen Victoria in the 19th century. In eastern cultures, brides often choose red to symbolize auspiciousness.

Weddings performed during and immediately following the Middle Ages were often more than just a union between two people. They could be a union between two families, two businesses or even two countries. Many weddings were more a matter of politics than love, particularly among the nobility and the higher social classes. Brides were therefore expected to dress in a manner that cast their families in the most favorable light and befitted their social status, for they were not representing only themselves during the ceremony. Brides from wealthy families often wore rich colors and exclusive fabrics. It was common to see them wearing bold colors and layers of furs, velvet and silk. Brides dressed in the height of current fashion, with the richest materials their families' money could buy. The poorest of brides wore their best church dress on their wedding day. The amount and the price of material a wedding dress contained was a reflection of the bride's social standing and indicated the extent of the family's wealth to wedding guests.

The first documented instance of a princess who wore a white wedding gown for a royal wedding ceremony is that of Philippa of England, who wore a tunic with a cloak in white silk bordered with grey squirrel and ermine in 1406.[1][2] Mary, Queen of Scots, wore a white wedding gown in 1559 when she married her first husband, Francis Dauphin of France, because it was her favorite color, although white was then the color of mourning for French Queens.[3][4]

This was not a widespread trend, however: prior to the Victorian era, a bride was married in any color, black being especially popular in Scandinavia.[5]

White became a popular option in 1840, after the marriage of Queen Victoria to Albert of Saxe-Coburg, when Victoria wore a white gown to incorporate some lace she prized. The official wedding portrait photograph was widely published, and many brides opted for white in accordance with the Queen's choice.[6]

Even after that, for a period, wedding dresses were adapted to the styles of the day. For example, in the 1920s, they were typically short in the front with a longer train in the back and were worn with cloche-style wedding veils. This tendency to follow current fashions continued until the late 1960s, when it became popular to revert to long, full-skirted designs reminiscent of the Victorian era.

Later, many people assumed that the color white was intended to symbolize virginity, though this was not the original intention: it was the color blue that was connected to purity, piety, faithfulness, and the Virgin Mary.[8]

About 75 percent of wedding dresses on the market are strapless dresses or sleeveless, in part because such dresses require less skill from the designers and are easier to alter to fit correctly.[9] However, the sleeved wedding gown as well as wedding gowns with straps have both become more popular in recent years.[10]

Many wedding dresses in China, India (wedding sari), Pakistan (heavily embroidered shalwar qameez or lehngas) and Vietnam (in the traditional form of the Ao dai) are red, the traditional colour of good luck and auspiciousness. Nowadays, many women choose other colours besides red. In modern mainland Chinese weddings, the bride may opt for Western dresses of any colour, and later don a traditional costume for the official tea ceremony. 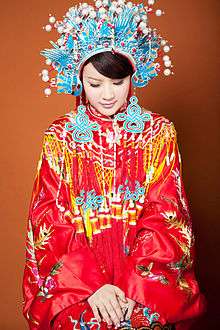 Red wedding saris are the traditional garment choice for brides in Indian culture. Sari fabric is also traditionally silk. Over time, colour options and fabric choices for Indian brides have expanded. Today fabrics like crepe, Georgette, charmeuse, and satin are used, and colors have been expanded to include gold, pink, orange, maroon, brown, and yellow as well. Indian brides in Western countries often wear the sari at the wedding ceremony and change into traditional Indian wear afterwards (lehnga, choli, etc.). 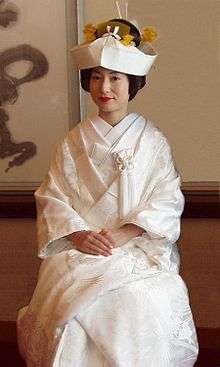 A Japanese wedding usually involves a traditional pure white kimono for the formal ceremony, symbolizing purity and maidenhood. The bride may change into a red kimono for the events after the ceremony for good luck.

The Javanese people of Indonesia wear a kebaya, a traditional kind of blouse, along with batik.

In the Philippines, variations of the Baro't saya adapted to the white wedding tradition are considered to be wedding attire for women, along with the Barong Tagalog for men. Various tribes and Muslim Filipinos don other forms of traditional dress during their respective ceremonies. 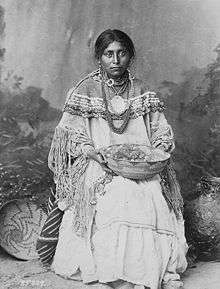 The indigenous peoples of the Americas have varying traditions related to weddings and thus wedding dresses. A Hopi bride traditionally had her garments woven by the groom and any men in the village who wished to participate. The garments consisted of a large belt, two all-white wedding robes, a white wedding robe with red stripes at top and bottom, white buckskin leggings and moccasins, a string for tying the hair, and a reed mat in which to wrap the outfit. This outfit also served as a shroud, since these garments would be necessary for the trip through the underworld.

A Pueblo bride wore a cotton garment tied above the right shoulder, secured with a belt around the waist.

In the traditions of the Delaware, a bride wore a knee-length skirt of deerskin and a band of wampum beads around her forehead. Except for fine beads or shell necklaces, the body was bare from the waist up. If it was a winter wedding, she wore deerskin leggings and moccasins and a robe of turkey feathers. Her face was painted with white, red and yellow clay.

The tribes of Northern California (which include the Klamath, the Modoc and the Yurok) had a traditional bridal dress woven in symbolic colors: white for the east, blue for the south, yellow (orange) for the west; and black for the north. Turquoise and silver jewelry were worn by both the bride and the groom in addition to a silver concho belt. Jewelry was considered a shield against evils including hunger, poverty and bad luck.

Wedding dresses from different areas of the world