Military police of the United Kingdom

In the United Kingdom, the term military police refers to the three branches of the service police. Often, the term 'military police' is considered synonymous with the Royal Military Police, but in fact, has a wider context. There are a number of civilian police forces whose role is to police other parts of the Defence Estate in the UK and overseas, but such forces are not correctly referred to as military police. 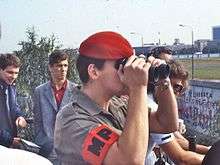 British military police officer using field glasses to look across the Berlin Wall from a viewing platform on the western side, 1984

In the UK, service police[1] are the formations of the British Armed Forces responsible for policing armed forces personnel. They are comparable to the provosts of other countries, however the term provost in the UK has various uses including reference to the staff of military prisons and senior service police officers (e.g. the Provost Marshal). Each of the services has its own service police branch, a standalone unit responsible for policing, close protection of VIPs[2] and, in the case of the Royal Military Police and Royal Air Force Police, other matters such as traffic control.[3][4]

The Royal Navy Police also has Royal Marines specialising as Service Policemen. Prior to 2009, the Royal Marines Police was an independent organisation within the Corps of Royal Marines.

Jurisdiction in respect of civilians

Service police are not constables under UK law and do not have any constabulary powers over the general public, however they have the full range of policing power that constables possess when dealing service personnel or Civilians subject to Service Law. However, the service police can utilise the powers, available to all persons in England and Wales, under Section 24(A) of the Police and Criminal Evidence Act 1984; which allows any person to arrest any individual they have reasonable grounds to believe is committing, or has committed, an indictable offence, and that a constable is not available to perform the arrest.[6] They are allowed to use such force as is reasonable in the circumstance to achieve this.[7] A similar power of arrest exists under Scottish common law, but there is a requirement to use the minimum amount of force and for the Military Police officer to have directly witnessed the individual commit the act for which they are arresting them.

The service police will patrol either independently or alongside civilian police officers from local territorial police forces. London's Soho is one example of this, in addition to various military towns such as Aldershot Garrison (where there are numerous barracks) and also in Plymouth due to its proximity to HMNB Devonport.[8] During these joint patrols service police may sometimes assist territorial police officers, and may fully deal with arrested service personnel.[8]

Where service personnel are deployed overseas, the service police are often called upon to provide a complete policing service. In these situations, members of the service police can often exercise police powers in respect of civilians subject to service discipline. This includes, not exclusively, service dependents and overseas contractors sponsored by the British Armed Forces. When deployed to the Falkland Isles, Service Police are sworn in as constables.

All service police receive their trade training at the Defence College of Policing and Guarding, and utilise the Service Police Crime Bureau operated by the RNP, RMP and RAFP. Each of the service police branches has its own Special Investigation Branch to undertake investigation of more serious crime and plain-clothes investigations.

The British Military Correctional Training Facility (MCTC) (prison) at Colchester is operated by the Military Provost Staff Corps, an all-senior NCO corps which only recruits from serving personnel. The staff of the Military Provost Staff Corps are known as provosts and fulfil a similar role to prison officers, MPS but should not be confused with regimental provosts who fulfil a discipline function for regiments.

In addition to being policed by the Royal Military Police, the British Army has Regimental Provosts, who are members of individual regiments or corps with responsibility for discipline only within their own unit. Members of the Regimental Provost can be identified by the brassards they wear, which carry the letters "RP". They have no power of arrest over service personnel nor are they a 'policing organisation' per se. Their primary purpose is to enforce breaches of service discipline at a local unit level.

There are several civil police forces responsible to the Ministry of Defence. They each have specific roles and are staffed by police officers who are not part of the armed forces and have constabulary powers, thus they are not military police.