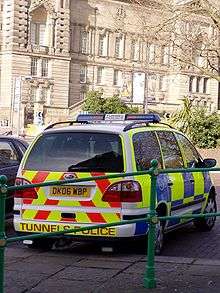 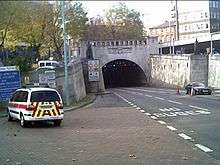 Mersey Tunnels Police officers hold the office of constable. Unlike most police services in England and Wales, the service is answerable to the Merseyside Passenger Transport Executive[1] rather than the Home Office. The executive also appoints the service's officers who are formally sworn in as police constables by a justice of the peace.[2] As of 2010 the service consisted of around 55 officers across the various ranks. The service's jurisdiction consists of the tunnels themselves, marshaling areas, entrance/exit roads and all Mersey Tunnels premises. Officers execute their duties in accordance with The Mersey Tunnels Bylaws.[2] In some cases, officers may assist with high-urgency motorway incidents in the surrounding area where other patrols are further away.

The tunnels service have primary responsibility for these areas, meaning they enforce the Mersey Tunnels bylaws and like all other police services the various and relevant UK statute law/legislation although perhaps by the nature of the role primarily the Road Traffic Act. Mersey Tunnels Police officers are the first line responders to any incidents or emergencies within the tunnels or premises although certain incidents and enquiries of a serious nature may be dealt with by Merseyside Police in accordance with local agreements between the two services.

As of January 2015, the establishment of the service consisted of 51 officers, divided amongst the following ranks: One chief officer, five inspectors, 10 sergeants and 35 constables.[3]

The Police service was heavily criticised by the Merseyside coroner for its handling of a pursuit in which two 14-year-old boys were killed in 2003 after crashing a stolen car into a roadblock set up by Mersey Tunnels officers. The coroner went so far as to recommend that either the policing of the tunnel should be altogether transferred to Merseyside Police, or tunnel officers should be trained to national policing standards.[4]

In March 2009, a driver was allegedly pulled over by a Tunnels officer for laughing behind the wheel, however the service has no official record of this incident having taken place.[5]