The Port of Liverpool Police is a small police force with the responsibility of policing the Liverpool, Bootle, Birkenhead, Ellesmere Port and Eastham Dock Estates and Freeports, as well as the Manchester Ship Canal areas in the north- west of England.

The Port of Liverpool police is accountable to the Department for Transport. Its officers receive their long service and good conduct medals from the department.[2]

In the discharge of their duty, the officers of the force hold the full powers of the office of constable whilst on the 70-square-mile (180 km2) area of the jurisdiction which is England and Wales.The force employs under 50 police officers, of whom five comprise the criminal investigation department.[3][4]

The force has a number of cars and vans, several dog units and a river patrol boat.

The rank structure of the Port of Liverpool Police is smaller than that used in most UK police forces, as shown below.

As with any Home Office police force, officers are required to sit and pass the OSPRE promotion examinations to be considered for promotion to sergeant and inspector.[7] Further promotion within the force falls down to selection, merit and budget allowance.

In its present form, the force has existed since the 19 June 1975, when it was created by The Mersey Docks and Harbour (Police) Order, statutory instrument No. 1224 of 1975. The dock has had a dedicated police force throughout its history, though not always constantly:

The force has jurisdiction over the whole of the Port of Liverpool and Manchester Ship Canal. Officers can discharge their duties throughout England and Wales. The Port of Liverpool Police has entered into a memorandum of understanding with Merseyside Police, the territorial police force with statutory responsibility for policing Merseyside, which sets out how the two forces operate together and the sharing of certain resources, for example, custody facilities.[11] The port police responds to the report of all crimes and emergencies within the port area. However, according to the memorandum, each force may call upon the other where a situation is outside of its operational abilities. Merseyside Police will take over the handling of a major incident, whilst assisted by the Port of Liverpool Police, and investigations with regard to: 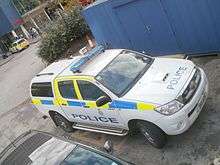