Mir Qasim (also spelt Mir Kasim; full name: Mir Kasim Ali Khan) (died May 8, 1777) was the Nawab of Bengal from 1760 to 1763. He was installed as Nawab with the support of the British East India Company, replacing Mir Jafar, his father-in-law, who had himself been supported earlier by the East India Company after his role in the Battle of Plassey. However, Mir Jafar was in conflict with the East India company over too many demands and tried to tie up with the Dutch East India Company. The British eventually overran the Dutch forces at Chinsura and played a major role in replacing Mir Jafar with Mir Qasim.[2] Qasim later fell out with the British and fought them at the Battle of Buxar. His defeat has been suggested as the last real chance of preventing a gradual British expansion in large parts of North East India following Britain's victory in the Seven Years War.[3] 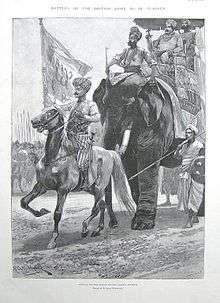 The Navab's arrival before Clive's position

Upon ascending the throne, Mir Qasim repaid the British with lavish gifts. To please the British, Mir Qasim robbed everybody, confiscated lands, reduced Mir Jafar's purse and depleted the treasury. However, he was soon tired of British interference and endless avarice and like Mir Jafar before him, yearned to break free of the British influence. He shifted his capital from Murshidabad to Munger in present-day Bihar where he raised independent army, financing them by streamlining tax collection.[2]

He opposed the British East India Company's position that their imperial Mughal licence (dastak) meant that they could trade without paying taxes (other local merchants with dastaks were required to pay up to 40% of their revenue as tax). Frustrated at the British refusal to pay these taxes, Mir Qasim abolished taxes on the local traders as well. This upset the advantage that the British traders had been enjoying so far, and hostilities built up. Mir Qasim overran the Company offices in Patna in 1763, killing several Europeans including the Resident. Mir Qasim allied with Shuja-ud-Daula of Avadh and Shah Alam II, the itinerant Mughal emperor, who were also threatened by the British. However, their combined forces were defeated in the Battle of Buxar in 1764.

Mir Qasim had also attacked Nepal during the reign of Prithvi Narayan Shah, the King of Nepal. He was badly defeated as the Nepali soldiers had various advantages including terrain, climate and good leadership.

The short campaign of Mir Qasim was significant as a direct fight against British outsiders. Unlike Siraj-ud-Daulah before him, Mir Qasim was an effective and popular ruler. The success at Buxar established the British East India company as a powerful force in the province of Bengal in a much more real sense than the Battle of Plassey seven years earlier and the Battle of Bedara five years earlier. By 1793 British East India company abolished Nizamat (Mughal suzerainty) and were completely in charge of this former Mughal province.

Plundered of most of his treasures, placed on a lame elephant and expelled by Shuja-ud-Daula after he had been routed at the Battle of Buxar, 23 October 1764; he fled to Rohilkhand, Allahabad, Gohad and Jodhpur, eventually settling at Kotwal, near Delhi ca. 1774.

Mir Qasim died in obscurity and abject poverty possibly from dropsy, at Kotwal, near Delhi on 8 May 1777. His two shawls, the only property left by him, had to be sold to pay for his funeral.[4]