This is a list of rulers of Bengal. For much of its history, Bengal was split up into several independent kingdoms, completely unifying only several times. In ancient times, Bengal consisted of the kingdoms of Pundra, Suhma, Anga, Vanga, Samatata and Harikela. Along with Bihar, parts of northwestern Bengal were also incorporated into the kingdom of Magadha.

Under the Mauryas, much of Bengal was conquered except for the far eastern Bengali kingdoms which continued to exist as tributary states before succumbing to the Guptas. With the fall of the Gupta Empire, Bengal was united under a single local ruler, Shashanka, for the first time. With the collapse of his kingdom, Bengal split up into petty kingdoms once more.

With the rise of Gopala, Bengal was united once more under the Pala Empire, Chandra dynasty, Sena dynasty and deva dynasty. After them, Bengal was ruled by the Hindu Maharajas of kingdoms such as Chandradwip and Cooch Behar except for a short period 14th to 16 th century under the regional power of Bengal sultanate who appointed various local Muslim officials- followed by the British. The position of the Prime Minister of Bengal was established in 1937, and served as the provincial chief executive in the British Raj, until 1947, when Bengal was partitioned, making West Bengal part of India and the East Bengal part of Pakistan. East Bengal then became an independent country, Bangladesh, following the Bangladesh Liberation War.

The Khadga dynasty was a line of Buddhist kings that ruled the areas of Vanga and later Samatata (modern Bangladesh).[1]

Mallabhum was the kingdom ruled by the Mallas kings of Bishnupur primarily in the present Bankura district in the Indian state of West Bengal.[2][3][4]

Most of the Pala inscriptions mention only the regnal year as the date of issue, without any well-known calendar era. Because of this, the chronology of the Pala kings is hard to determine.[5] Based on their different interpretations of the various epigraphs and historical records, different historians estimate the Pala chronology as follows:[6]

During the reign of Akbar

During the reign of Jahangir

During the reign of Shah Jahan

During the reign of Aurangzeb 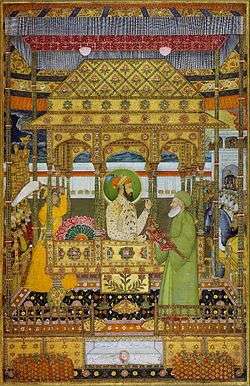 The Nawabs of Bengal

Many illustrious maharajas ruled much of East Bengal and the Sundarbans and conquered Jessore Their surname was Basu - they came to Bengal during the Sena Dynasty to conquer the Palas and take over from them. A famous literary novel was written about the Chandradwip Basu family by Tagore called BouThakuranis Haat and a film was made from this book

As per the treaty of Allahabad in 1765, the British East India Company (BEIC) was given the right to collect revenue (Diwani right). From 1769, the company collected revenue from Bengal.

Subsequently, all three Bengali premiers moved to East Pakistan, where they continued to be influential statesmen. Nazimuddin and Suhrawardy became Prime Ministers of Pakistan, while Huq served as the Chief Minister and Governor of East Pakistan.

After Independence of India and Pakistan

British colonial period ended when India and Pakistan became independent nations in 1947. Bengal fell into two parts – one in India, named West Bengal and the other part in Pakistan as East Bengal, later renamed to East Pakistan in 1955.

After independence of Bangladesh