Mishing, also known as Plains Miri and Takam, is a Tani language spoken by the Mishing people. There are over 500,000 speakers, who inhabit mostly the Lakhimpur, Sonitpur, Dhemaji, Dibrugarh, Sibsagar, Jorhat, Golaghat, Tinsukia districts of Assam. The primary literary body of Mishing is known as 'Mishing Agom Ke'bang'. 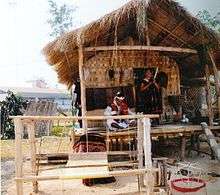 A traditional Mishing house is stilted.

Ethnologue gives the following locations for Mising speakers. The Hill Miri live in Arunachal Pradesh, while the Plains Miri live in Assam.

Mishing language belongs to the Tani branch of the Sino-Tibetan family. The Mishing is a highly agglutinative language, marked by the profusion of verbal suffixes, denoting various tenses, moods and aspects. It is also noted by its tonal peculiarities. The language is known for abundance of suffix, prefix, particle, participle and such additives. Any action can be expressed a few dozen ways by adding suffix to the verb-root, various combinations of inflectional or derivational suffixes, along with several types of reduplications. For instance, there is no common word for some aspects, but adding suffix to the verb the sense of the aspects accomplished: such as ‘complete’ or ‘end’ finds no equivalent word in the language, but the suffix ‘ngap’ added to verb suffices what work has been completed – dongap (dinning completed), geengap (end of the journey) and so on. The diacritical variations technically called diaphonic variations are observed in two central phonemes, viz., close central, variant from its frontal counterpart and half open central from the frontal half-open. Phonemic variants from short vowels to long variety are prominent but the plosive consonants to their aspirated variants are not weak. The language also has a wide array of classifiers and case-making systems. The major lexical categories are nouns, pronouns, verb and adverbs.

The authors of an English Grammar have subtly set apart written language from its vocal counterpart, inasmuch as to say, "The written language is an artificial product – more formal and exact than the spoken language; it is the product of generations of men of letters who have established a definite tradition in the matter of form and expression" (M. Alderton Pink & S. E. Thomas – English Grammar, Composition & Correspondence, Revised by J. J. Cowdery, Twelfth Edition, 1970, Chapter – 16, Diction & Style, p - 144). The Standard Mishing Language is the refined & formal form of the Mishing speeches used for the purpose of writing, which in turn, is largely deployed in creating literature, linguistic research, office correspondence, diplomatic interaction and also for effective vocal communications.

The Scripts for Transcription

The Roman scripts, as is used in the country today, are inclusively (learning once for all) adopted for Standard Mishing Language. Creation of additional symbols for the purpose of denoting central variants of /e/ and /i/ is negated for technology and mechanical contemplations. Rather, the aim of ‘maximum writing with minimum alphabetical letters’ is taken on. The addition of a new phonetic character and then putting them in alphabetical order in computer technology is by no means an easy task for a small community like the Mishings. Creation of extra symbol in the alphabetical matrix is tantamount to creation of new technology; and for us that becomes unfeasible, widely constrained by scare resources and times, which may wisely be avoided for speedy growth of the language. Standard Mishing Language has necessarily recognized altogether 15 vowel-sounds, of which 8 are shorts and 7 are of long variety, and 25 consonant-sounds (b, bh, ch, d, dh, g, gh, h, j, kh, l, m, n, ng, ny, p, ph, r, s, sh, t, th, v, w, y). This includes the sounds of loaned-words, neologism and modern scientific terminologies etc. These 15+25=40 phonemes (smallest unit of sound) found in Mishing-words are transcribed with the help of 26 alphabetical characters – utilizing the trouble-free mechanism of single, diagraph, diphthong, twinning and grapheme methods. Alphabetical characters denoting individual phoneme along with key-words are given in the subsequent paragraph below.

Sound and orthography of a language remains always the academic concern, which is invariably taught in regular classes in progression right from the scratch. Students should be given a most careful training in the rules of spelling and in writing under dictation. Thus, twenty-six letters of the Roman alphabet with their names and orders are adopted as the scripts of the Standard Mishing Language, to transcript 40 sounds of the language – eight vowel with seven of their long variety and twenty-five consonants. The alphabet ‘h’ preceded by a vowel gives rise to long-sound of the vowels such as ah, eh, ih etc., and while succeeded by a consonant corresponds to its aspirate value, such as bh, dh, gh etc.; so also fricative or affricative in case of ‘s’ or ‘c’, such as sh or ch respectively. The ‘h’ otherwise represents its conventional phoneme.

Likewise many other languages of the world including Arabic, Greek, Hebrew and Chinese, the alphabets are not named after their respective phoneme values. Similar practice holds good for Standard Mishing Language too. The names of the alphabets are thus read as is done in the country today. Names and order of the Roman Script have been recognized worldwide, and also by our country for reading and writing English and also transliteration of national terminologies; so Standard Mishing Language has retained them likewise without variations, neither in name nor in order. Names and order of alphabets have no partisan values. Rather, changing alphabetical order and inserting additional letter in the matrix of literal characters cause hardware problems in the computer technology. We being a small community hugely constrained by limited man-power, missionary and monitory resources; things cannot be done so easily. Even once done too, it will not be commercially viable in terms of its utility – just waste of time and energy.

While working on orthographic model for Standard Mishing Language, in feasible and stabilized terms, these factors were taken into consideration. The Mishing Society of Mumbai has therefore decided to retain the names and order of the Roman scripts in the manner how the country read them today. The twenty-six-letters Roman alphabet will also be inclusively called ‘Mishing Language Alphabet’. What is learnt in Mishing will be carried forward to the English-learning too or vice versa, according to academic priorities.

Rajani Kanta Bardoloi, in 1889-90, had first discovered that the Miri dialect, now Mishing Language, has no aspirate sound in its vocabularies. Those days, Mishing people were near-cent-per-cent illiterate. Due to self-sufficiency of economic dependence, there was no much verbal communication with people outside the community by the country-side populace. The local patios were just a quaint dialect, part of vocalic euphemism. Lots of waters have been flown since then down the Subansiri River. Today, even an un-lettered person of the interior village also called Dhemaji, not Demaji. This development can neither be suppressed nor ignored. That demonstrates the need of aspirate phoneme and the denoting alphabetical symbol thereof. The referred Society had therefore freed the aspirate pronouncement from the shy of phonetic untouchability and terror of phonemic chauvinism. Far be it from the archaic perceptions, we need to acknowledge the concept of linguistic evolution over the times, not only the plosive (voiced and voiceless) aspirates ph, kh, th, bh, gh, dh but also fricative and affricative sh, ch too to move in the language freely, which are being deployed case-wise on meritorious considerations.

Phonemic Symbols and their Demonstrative Key-Words

The orthography of Standard Mishing Language is fully phonetic, follows all the phonemic values of the language which are being denoted by conventional Roman Letters (without diacritical variants) and then a few exceptional sounds that are treated with explicitly devised combinations as indicated below:

Key-words are not required for the following consonant letters, since they have their customary Mishing words: b, d, g, j, k, l, m, n, p, r, s, t, w, y. Below are the key-words for the remaining Mishing sounds, including affricate and aspirated consonants, vowels – short & long.

Note:- Aspirates and affricates are mostly used in proper nouns and also in loaned words. In case of front half-open and central half-open the following rules for positioning may broadly be adhered to avoid confusion: 1. The vowel digraph /ea/ appears as first member and also in the intermediate position of a word. 2. A word never ends with /ea/, whereas /ey/ invariable does. 3. The compounding /ea/ does not go with /h/ to form ligature like /eah/. 4. Whereas /ey/ forms a ligature with /h/ as /eyh/ and placed as first member as well as in word-initial. 5. There is no or hardly any sound represented by /eyh/ in the intermediate position of a word.