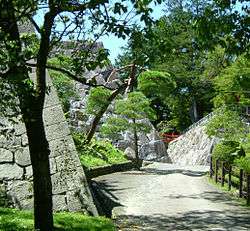 Park in Morioka with the ruins of Morioka Castle, seat of the domain

Morioka Domain (盛岡藩, Morioka han) was a han or feudal domain.[1] It corresponded in the middle and northern parts of modern Iwate Prefecture and the eastern part of modern Aomori Prefecture. It is sometimes colloquially called Nanbu Domain (南部藩, Nanbu han). Its income was 100,000 (koku). The Morioka domain was a member of the Ōuetsu Reppan Dōmei in 1868, and its troops fought in the Boshin War.

The Nanbu clan sided with Tokugawa Ieyasu's Eastern Army during the Battle of Sekigahara. In the wake of Ieyasu's victory, the Nanbu clan was confirmed in its lordship of the Morioka Domain (盛岡藩, Morioka-han) (also known as the Nanbu Domain (南部藩, Nanbu-han)).[2] The income rating was placed at 100,000 koku, but later in the Edo era, Morioka was given the political ranking of a domain twice its size.[3] The Nanbu clan remained here for the entirety of the Edo Period, surviving until the Meiji Restoration. Over the course of the Edo period, two new branches of the Nanbu clan were founded. One of them was granted the fief of Hachinohe,[4] and the other one was granted the fief of Shichinohe.[5]

A Dutch ship, the Breskens, arrived in Nanbu territory in the late 16th century; a shore party from the ship was captured by local authorities and taken to Edo.[6] In 1821, the old tensions between the Nanbu and Tsugaru flared once more, in the wake of the Sōma Daisaku Incident (相馬大作事件, Sōma Daisaku jiken), a foiled plot by Sōma Daisaku, a former retainer of the Nanbu clan, to assassinate the Tsugaru lord.

Though no Nanbu lord ever held shogunate office, the Nanbu of Morioka (together with many of the other domains of northern Honshū) assisted the shogunate in policing the frontier region of Ezochi (now Hokkaido).[7]

The Nanbu clan's territories were among those affected by the Tenpo famine of the mid-1830s.

During the Boshin War of 1868-69, the Nanbu clan was initially neutral.[8] However, under the leadership of Nanbu Toshihisa and the clan elder (家老, karō) Narayama Sado, the Nanbu clan later sided with the northern alliance (the Ōuetsu Reppan Dōmei).[9] Morioka troops led the attack on the Akita Domain, which had seceded from the alliance and sided with the imperial government.[10] After the war, the Nanbu clan's holdings were drastically reduced by the imperial government as punishment for siding with the northern domains. The Nanbu of Morioka were then briefly moved to Shiroishi.[11] Two years after the war, as with all other daimyo, the heads of all three Nanbu branches were relieved of their offices by the abolition of the han system.

In fiction, the Morioka domain is the setting for sections of the novel Mibugishiden, as well as the film Twilight Samurai.