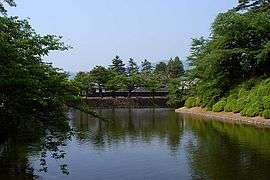 Yonezawa Domain (米沢藩, Yonezawa-han) was a feudal domain in Edo period Japan, located in Dewa Province (modern-day Yamagata Prefecture), Japan. It was centered at Yonezawa castle in what is now the city of Yamagata, and its territory extended over the Okitama District of Dewa Province, in what is today southeastern Yamagata Prefecture. It was ruled throughout its history by the Uesugi clan, as tozama daimyō, with an initial income of 300,000 koku, which later fell to 150,000-180,000. The Uesugi were ranked as a Province-holding daimyo (国持ち大名, kunimochi daimyō) , and as such, had the privilege of shogunal audiences in the Great Hall (Ohiroma) of Edo Castle.[1]

The domain is perhaps most notable for its rapid shift from a poor, indebted, and corruptly led domain to a very prosperous one in only a few decades in the 1760s-80s. Yonezawa was declared in 1830 by the shogunate to be the paragon of a well-managed domain. Scholar Mark Ravina used Yonezawa as a case study,[2] in analysing the political status and conceptions of statehood and identity in the feudal domains of the Tokugawa period (1603-1868).

The region which later became Yonezawa Domain was held by the Date clan for much of the Sengoku period, from 1548-1591, when Toyotomi Hideyoshi came to power and declared the Date move to Iwadeyama in Mutsu province. The Gamō clan were given Aizu to govern under the Uesugi, and Tairō Uesugi Kagekatsu gave his karō (advisor) Naoe Kanetsugu a 300,000 koku income.

In 1600, however, the Uesugi opposed Tokugawa Ieyasu in the Sekigahara Campaign, and lost, becoming tozama daimyō (outsider lords) under the new shogunate. Their income and territory worth 1,200,000 koku was reduced to 300,000, and they were forced to leave their holdings in Aizu, and were allowed to keep only Yonezawa, which they recovered from Naoe Kanetsugu. Their new domain thus consisted of 180,000 koku in Dewa Province, and 120,000 koku in neighboring Mutsu province. This 300,000 koku territory would represent the peak of the Uesugi clan's income during the Tokugawa period.

As with most of the han, Yonezawa acted as a semi-independent state, ruled directly by its daimyō. The Uesugi demanded respect for the shogunate from their retainers, and forbade public criticism, but only imposed and enforced those edicts and policies set by the central authorities which they chose to. Retainers were ordered to obey shogunal laws while outside the domain, but within it, shogunal orders did not apply unless conveyed by the daimyō.[3]

In 1664, the third daimyō of Yonezawa, Uesugi Tsunakatsu, died without producing an heir. The succession was determined at the advice of his father-in-law, Hoshina Masayuki, the younger brother to shogun Tokugawa Iemitsu. He suggested that the clan adopt Uesugi Tsunanori, the son of Tsunakatsu's younger sister and Kira Yoshinaka as heir, although this would mean splitting the domain in half, down to only the 150,000 koku portion within Dewa province. This decision led to severe financial difficulties in the domain, for the Uesugi and their administration, and for the increasingly impoverished peasants. The problem became so severe that the eighth daimyō, Uesugi Shigetada, seriously considered surrendering the domain to the shogunate. Instead, he resigned his position as daimyō in favor of Uesugi Harunori, who then began to reform the domain's administration and to revive its economy. He introduced strict disciplinary measures, and ordered the execution of several karō who opposed his plans. In order to finance castle repairs imposed upon his domain by the shogunate, Harunori asked his retainers to agree to a reduction of their stipends. As a result of these various measures, Yonezawa again became fairly prosperous, and did not suffer much from the great famine which swept Japan in the Tenmei era (1781-9). In 1830, the shogunate formally declared Yonezawa to be a choice example of a well-governed domain.

The domain had a population of 127,277 people in 23,440 households per the 1870 census. It maintained its primary residence (kamiyashiki) in Edo near the Sakurada-mon gate to Edo Castle. The site is now the head office of the Ministry of Justice (Japan).[4] The domain’s secondary residence (shimoyashiki) was in Azabu, and its tertiary residences (nakayashiki) was in Shirogane.

When the Boshin War erupted in 1868, and the shogunate came to an end with the abdication of shogun Tokugawa Yoshinobu, the Uesugi joined the "Northern Alliance" (Ouetsu Reppan Domei), voicing their support for the embattled Aizu domain and opposing Satsuma and Chōshū domination of the new imperial government, while stating an intent to "reconquer Japan, that the Emperor may indeed reign over it."[5] The Alliance members also acknowledged their debt to Hoshina Masayuki, the first Aizu lord, who was a respected figure in many domains. After several months the Alliance was defeated, and the new Meiji government reduced the domain by 40,000 koku, and its subsidiary domain of "Yonezawa Shinden han" was abolished in 1869. Yonezawa Domain became Yonezawa prefecture with the abolition of the han system as a whole two years later, and was then combined with Okitama prefecture to form Yamagata prefecture.

The final daimyo of Yonezawa, Uesugi Mochinori, was later ennobled with the new kazoku peerage title of hakushaku (Count).

Famous advisors (karō) of the Yonezawa Domain through the course of the Edo period included Chisaka Takafusa, Irobe Matashirō, and Chisaka Takamasa.