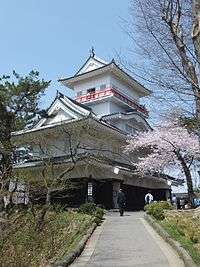 Kubota Castle, the seat of the Kubota Domain (Akita Domain)

Kubota Domain (久保田藩, Kubota han) was a feudal domain in Edo period Japan, located in Dewa Province (modern-day Akita Prefecture), Japan. It was centered on Kubota Castle in what is now the city of Akita and was thus also known as the Akita Domain (秋田藩, Akita han). It was governed for the whole of its history by the Satake clan. During its rule over Kubota, the Satake clan was ranked as a Province-holding daimyo (国持ち大名, kunimochi daimyō) family, and as such, had the privilege of shogunal audiences in the Great Hall (Ohiroma) of Edo Castle.[1]

In the Boshin War of 1868-69, the domain joined the Ōuetsu Reppan Dōmei, the alliance of northern domains supporting the Tokugawa shogunate, but then later defected to the imperial side. As with all other domains, it was disbanded in 1871.

The Satake clan was a powerful samurai clan, while ruled Hitachi Province from the late Heian period through the end of the Sengoku period. In 1600, the Satake sided with the pro-Toyotomi cause at the Battle of Sekigahara.[2][3] After the defeat of the pro-Toyotomi forces by Tokugawa Ieyasu and the establishment of the Tokugawa shogunate, the Satake clan was punished by a severely reduction in its income level.[4] and by being ordered to change their ancestral territories in Hitachi with a much smaller fief in inhospitable northern Japan. As a result of this drop in income (to 205,000 koku, or less than half of their previous income of around 540,000 koku), the Satake had to lay off many retainers, and institute a general stipend reduction for those it kept.[1][5]

The domain also struggled through agricultural crises, which resulted in several peasant uprisings throughout the course of its history. It was also beset by an internal O-Ie Sōdō conflict, the Satake disturbance (佐竹騒動, Satake-sōdō), which was brought on by financial issues.

The domain had a population of 56,813 people per the 1730 census. It maintained its primary residence (kamiyashiki) in Edo at Uchi-Kanda Asahi-cho until a fire in 1682, after which the residence was moved to Shichigen-cho in Shitaya.[6] The domain’s secondary residence (shimoyashiki) was in Fukagawa (later moved to Sakumachō), and its tertiary residences (nakayashiki) were in Torigoe, Honjo and Nippori. 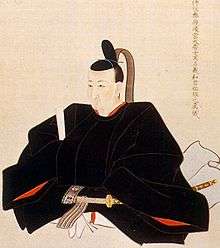 Satake Yoshiatsu (better known by his nom-de-plume “Satake Shozan”), the 8th generation lord of Kubota, was an accomplished artist.[7] Yoshiatsu painted a number of paintings in the Dutch style, and also produced three treatises on European painting techniques, including the depiction of perspective.[8] He was also a student of Dutch studies (rangaku) scholar Hiraga Gennai, who he had invited up to Akita to advise him on management of the domain's copper mines.[8] It was during Yoshiatsu's lifetime that the Akita school (秋田派, Akita-ha) of art was born and briefly flourished.[8]

Kubota Domain was uncommon in that it contained more than one castle, and was an exception to the Tokugawa shogunate's "one castle per domain" rule. The main castle was Kubota Castle, but there were also castles at Yokote and Ōdate, and five fortified estates elsewhere in the domain: Kakudate, Yuzawa, Hiyama, Jūniso, and In'nai.[9] Each of these was given to a senior retainer who ran it as his own small castle town. The senior retainers had personal retainers who resided in these castle towns.

Two of the clan elder (karō) families serving the Kubota domain were branches of the Satake family. One was the North Satake (Satake-hokke) family, stipended at 10,000 koku; the other the West Satake (Satake-nishi ke) family, stipended at 7200 koku. The North Satake family had its landholdings around Kakudate, one of the fortified estates mentioned above; the West Satake resided in and had their landholdings around Ōdate. Yokote Castle was in the care of another hereditary karō family, the Tomura.[10] Norihisa Satake, the current mayor of the city of Akita, is a descendant of the North Satake.

During the Boshin War of 1868-69, the Satake clan was a signatory to the pact that formed the Ōuetsu Reppan Dōmei,[11] the alliance of northern domains led by the Sendai Domain. The Satake clan's delegation at Shiroishi, the alliance's headquarters, was led by the clan elder (karō) Tomura Yoshiari.[12][13] However, the Satake had political difficulties with the alliance, which culminated in the murder,[14] in Akita, of a delegation from Sendai on August 21, 1868,[15][16][17] and the display of the messengers' gibbeted heads in the Akita castle town.[18] The delegation, led by Shimo Matazaemon, was dispatched to request the Akita domain to hand over Kujō Michitaka and other officials of an imperial delegation that had been originally sent to the region to gather support for the imperial cause.[19] The Satake then backed out of the alliance and supported the imperial army; eleven days later, on September 1, 1868[20] the Tsugaru clan of the neighboring Hirosaki Domain followed suit.[16][21] In response, the pro-alliance domains of Morioka and Ichinoseki Domains sent troops to attack Kubota.[22] Kubota forces were hard-pressed to defend their territory, with the result that the alliance troops had made serious advances by the time the war ended in northern Honshū.[22] In early 1869, Satake Yoshitaka formally gave up the domain's registers to the imperial government, and was made imperial governor of the Akita domain (han chiji).[23] In mid-1869, the imperial government rewarded the service rendered by the main line of the Satake clan, by raising its income by 20,000 koku.[23] The heads of all the Satake clan's branches were relieved of office as daimyo in 1871,[24] and ordered to relocate to Tokyo. Satake Yoshitaka subsequently received the kazoku peerage title of koshaku (marquis).

Holdings at the end of the Edo period

As with most domains in the han system, Kubota Domain consisted of several discontinuous territories calculated to provide the assigned kokudaka, based on periodic cadastral surveys and projected agricultural yields.[25][26]

Iwasaki Domain (岩崎藩, Iwasaki han), also known as Akita Shinden Domain (久保田新田藩, Akita Shinden han) was founded in 1701 for Satake Yoshinaga, the fourth son of Satake Yoshitaka, the 2nd daimyo of Kubota Domain, who assigned him 20,000 koku of rice revenues from newly opened fields. He built a jin'ya in what is now Yuzawa, Akita, where his descendents continued to rule until the Meiji restoration. The domain was unusual in that it did not directly control any territory, but was assigned revenues from the general revenues of the parent domain. The daimyo of Iwasaki Domain participated in the sankin kotai system, and used Kubota Domain’s tertiary residence in Edo, located in Torigoe.[28]