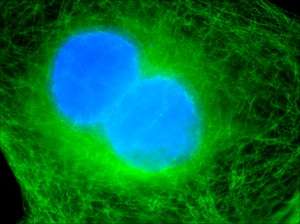 Cell division. All cells can be considered motile for having the ability to divide into two new daughter cells.[1] 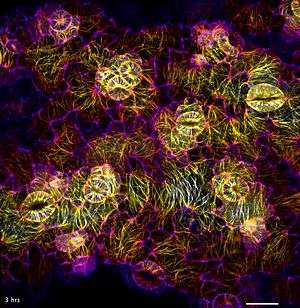 Eukaryotic cytoskeletons induce cells to move through liquid and over surfaces, divide into new cells, and the cytoskeleton guides the transport of organelles within the cell. This video captures stained cytoskeletons from the cross section of a leaf of Arabidopsis thaliana.[2]

In biology, motility is the ability to move spontaneously and actively, consuming energy in the process.[3] Motility is genetically determined[4] (see genetic determinism) but may be affected by environmental factors. For instance, muscles give animals motility but the consumption of hydrogen cyanide (the environmental factor in this case) would adversely affect muscle physiology causing them to stiffen leading to rigor mortis.[5][6][7] Most animals are motile but the term applies to unicellular and simple multicellular organisms, as well as to some mechanisms of fluid flow in multicellular organs, in addition to animal locomotion. Motile marine animals are commonly called free-swimming.[8][9][10]

At the cellular level, different modes of motility exist:

Many cells are not motile, for example Klebsiella pneumoniae and Shigella, or under specific circumstances such as Yersinia pestis at 37 °C.

The events that are perceived as movements can be directed: