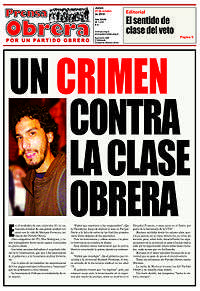 Prensa Obrera's front page in the edition of October 21. It says: "A crime against working class"

On 20 October 2010, Argentine student and left-wing activist Mariano Ferreyra was shot dead in Buenos Aires by members of a railway workers union.

Mariano Ferreyra (born 3 June 1987 in Sarandí) was an Argentine student who was active in the Workers' Party (Partido Obrero). He was shot dead during a dispute involving railway workers in Buenos Aires. He was allegedly shot by supporters of the Peronist Unión Ferroviaria (Railways Union), affiliated to the CGT, in a clash with socialist workers. Two other people were injured in the shooting. One, Elsa Rodríguez, a mother of three, was seriously injured and was still fighting for her life in hospital a week later. At the time it was alleged that the police stood by. Ferreyra's death led to widespread protests in Argentina.

It was proved that José Pedraza (the leader of the Unión Ferroviaria) had ordered his people to shoot and create incidents. Former President Mr. Nestor Kirchner took a personal interest in the case (he protected witnesses in his home) until he died a week later.

Protest march in support of Ferreyra