Argentina installed foreign exchange controls in 2011, at the beginning of the second presidency of Cristina Fernández de Kirchner. Those controls limited the power to buy or sell foreign currencies, specially American dollars. The restriction was informally known in Argentina as "Cepo cambiario" (Spanish: exchange clamp). The controls were lifted in December 2015, at the beginning of the presidency of Mauricio Macri. 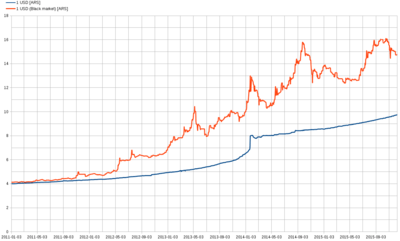 The first restrictions were imposed on October 31, 2011. The AFIP required that both people and business that sought to buy dollars should request permission, which may depend of the financial status of the buyer. However, the actual rules were arbitrary. In February, it was arranged that any international payments in dollars, such as imports. It also affected the foreign investors who sought to return their earnings to their own countries.[2]

Credit cards used abroad also received limits. In May 2012 it was arranged that people would only be able to buy dollars for the 25% of their wages.[2]

In June 2012 the AFIP forbade to buy dollars, except for a limited number of activities. As the country had a high inflation at that point, people used to buy dollars to keep the value of their money. The use of dollars for tourism received more limits a pair of months later: people would only receive the local money of the country that they visited, and just 7 days before the trip.[2]

In the end of 2015, the country had very low foreign reserves, and a high inflation.[3]

Mauricio Macri, who opposed the Kirchners, promised in the 2015 presidential campaign that he would cancel the restrictions immediately, as part of the reforms to promote economic growth. The restrictions were lifted on December 17, a week after taking office. Previously to it, the minister Alfonso Prat-Gay sought sources of financing, such as international banks and grain exporters.[3] It is estimated that the grain exporters have billions of dollars in stockpiled productions, awaiting for the changes to sell them.[4]