The Relato K (Spanish: K narrative) is a term employed by anti-Kirchnerists to refer to the alleged propaganda apparatus of the former Argentine president Cristina Fernández de Kirchner.[1]

Cristina Kirchner nationalized the broadcasting of football matches of the Argentine Football Association. Meant as a measure to damage the finances of the Clarín group, which owned the licence up to that point for a pay-per-view service, it was announced as an attempt to guarantee free access to football broadcasting. The nationalized football broadcasting was named Fútbol para todos. It was used afterwards to promote Kirchnerite propaganda. No private ads were used in the segment of television advertisement, which included only state announcements, and attacks to rival parties and the press, either inside state announcements or in 6, 7, 8 ads. 6, 7, 8 was aired immediately after the matches, but the television rating did not stick, and dropped from 15 points to 2. The lack of advertising from private enterprises caused a huge deficit in the program, forcing the state to invest 3.86 million dollars on a daily basis to keep it up.[2]

The Kirchner government hired people to write in blogs, social networks such as Facebook and Twitter, internet forums and other web pages of public access. Known as "Blogueros K" or "Cyber K", they were financed by the Chief of the Cabinet of Ministers. Their interventions are usually disruptive, and focused on discrediting the opponents with insults and cyberbullying. Most of them register to sites with fake identities, or with multiple accounts.[3]

An instruction manual, named "Técnicas de resistencia activa: Micromilitancia" (Spanish: Techniques of active resistance: micromilitancy) was leaked in 2016. It instructed people to disrupt Facebook pages and the forums of the most important Argentine newspapers, such as Clarín, La Nación, La Voz, and Infobae. It encourages the use of loaded questions to reveal the points of view of other people, and to reply by posting articles with information that harms the credibility of the government of Mauricio Macri, even if completely unrelated to the main article.[4]

Cristina Kirchner frequently uses words in both grammatical genders, instead of using the standard male form. A common case is to replace the word "todos" (Spanish: "everybody") with the phrase "todos y todas". This style grew beyond kirchnerism and was adopted by people in other countries. When the only difference between the male and female form of a term is a character that may be "a" or "o", the @ may be used in written language. Those styles have been rejected by the Real Academia Española.[6]

A group of intellectuals that supported the Kirchners' presidencies, Carta Abierta created the neologism "Destituyente" (which is not in the Dictionary of the Royal Spanish Academy), a synonym of "Destituidor", during the 2008 Argentine government conflict with the agricultural sector. It is used to describe someone or something that may be promoting a soft coup. The word has been used frequently since then to describe the opposition or critics of the government.[7] 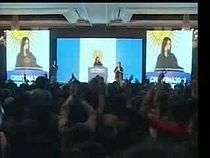 Cristina Kirchner made a frequent use of the Cadena nacional to broadcast messages. Although it was initially conceived as an emergency population warning, it was used to make political announcements and opening of buildings and organizations. Many cadenas featured casual conversations of Cristina with alleged common workers and casual citizens. This intended to generate an image of a president close to the people. Later press investigations revealed that these people were low-rank government officials, and the practise was eventually dropped.[8]

The main overarching theme of the "Relato K" is a purported conflict between the people and the factions that oppose the general will. Under this interpretation, Néstor and Cristina Kirchner are aligned with the people.[9] The latter side is usually composed by the non-Kirchnerite media (mainly the Clarín newspaper), the rural industries, the financial services, the vulture funds,[10] and the imperialism and local Argentines aligned with it.[9] Specific people or organizations may be placed on either side according to the political needs of the time, and the pro-Kirchner network may shift the support or criticism accordingly.[9]

Kirchnerism polarizes all people and organizations under this scheme, and does not acknowledge neutral parties. As a result, those who do not agree with Kirchnerism find it hard to stay neutral, and usually become anti-Kirchnerite themselves.[11]

Fernando de la Rúa was elected president in 1999 in the Alliance ticket. He resigned during the December 2001 riots in Argentina, which brought the Convertibility plan to an end. Many former members of the De la Rúa's government worked for Kirchner in later years, such as Chacho Álvarez, Nilda Garré, Juan Manuel Abal Medina, Diana Conti and Débora Giorgi. Still, Kirchnerism makes frequent harsh criticisms to the Alliance, in order to imply that only a Peronist may successfully rule in Argentina. None of those former members of the Alliance manifested any concern about those criticisms.[12]

The Relato K does not have a coherent perspective of the Cacerolazos, a protest tactic employed against De la Rúa. Initially, when the cacerolazos had so far only been used during the crisis, they were praised as a tool of direct democracy. Cristina Kirchner received her own cacerolazos years later, such as during the 8N protest and the 2008 conflict with the agricultural sector. The Kirchnerite writer Ernesto Laclau considered that those protests came from rich people who may be losing their former privileges, and thus should be ignored.[13] Kirchnerism employed cacerolazos as a protest tactic against Mauricio Macri, but those were renamed as "Ruidazos", to avoid the contradiction.

Mauricio Macri became president in 2015, and suceded Cristina Kirchner in office. His presidency is compared with the 1955 Revolución Libertadora military coup, which deposed Juan Perón. Although many judicial cases against Kirchner gained renewed speed when she left office, none of the judges were appointed during the presidency of Macri. The Libertadora enforced the Peronist proscription with tortures and executions, absent in modern Argentina.[14]

The economy of Argentina during the Kirchner government saw an increased prosperity, which also took place in most of Latin America during the period. It was caused by the economic growth of China, which increased the international prices of primary goods. One of those goods is soybean. Still, the "Relato K" maintains that the economic prosperity is the result of a process of industrialisation.[15] The period is named "Década ganada" (Spanish: "Earned decade"), a term used as a dichotomy of the name "Década perdida" (Spanish: "Lost decade") used to describe the 1980s economc crises in Latin America. Both terms are contested by historians, as the periods had both positive and negative aspects.[16]

The usual way to describe the period as the "Década ganada" is to compare the economic figures with the 1998–2002 Argentine great depression, as in most cases the figures are better than those of the crisis. Other less favourable comparisons are ignored, such as the comparisons with neighbour countries during the same years, or with the economic history of Argentina on a larger scale (for example, with the pre-crisis figures of the 1990s). It also treats the period as an homogeneous one, and ignores the changes in the figures that took place within it.[17] 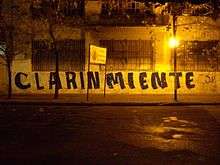 Despite of the presence of a network of supportive media, Cristina Kirchner rarely makes reference to it, and when she talks about "the press" or "the media" in general, she makes reference to the press that is not part of such network. She claims that the media concealed the good news about her government and gave great significance to bad news, in order to decrease the morale of the people. As a result, she made an extensive use of the cadena nacional (initially conceived as an emergency population warning) to announce the news that she considered that did not had a significant news coverage.

The union leader Hugo Moyano, who supported the Kirchners at that point, attended a Kirchnerite political rally with a banner that reads "Clarín miente" (Spanish: Clarín lies), in reference to the Clarín newspaper. It was incorporated to the "Relato K" as a frequent slogan. It was not used for specific news published by Clarín, but to make reference to the newspaper as a whole, in order to discredit it. Despite of the defamation campaign, Clarín is still the highest sold Argentine newspaper.[18]

As other contemporary left-wing populists in South America, the Kirchners make frequent praises to democracy in their speeches, in order to conceal their authoritarian policies. They work on the premise that the populist leader is the embodiment of the will of the people, and as such should be allowed to rule with unlimited power. Under this vision, any attempt to place limits, controls or oversight to their actions is described as an attack to democracy, or a veiled attempt to make a coup.[19] The 2011 presidential elections, won by Cristina Kirchner by a 54%, was often cited as a source of legitimacy for any policy. However, the Relato K does not grant a similar recognition to other elected governors that oppose them, such as Mauricio Macri.[20]

Many corruption scandals took place during the presidency of Cristina Kirchner. The usual approach to those scandals is to deny everything, and claim that they were defamation campaigns seeking to topple the government.[15]

The Kirchners make frequent appeals to emotion, claiming both that they love the people, and that the people love them. Rather than just their own supporters, the sentiment is attributed to the whole population of Argentina.[21]

Cristina Kirchner downplayed the impact of state propaganda, suggesting that private media may be more powerful than it. She based her reasoning in the amount of money involved in the media market, which is bigger than the state budget destined to promote propaganda.[22]

The philosopher Ricardo Forster considered that all political movements have a "relato", but pointed that there is a limit on the amount of manipulation of information that may be used by it in order to stay convincing. He also said that the people who critizise the "relato" may be motivated by resentment or elitism. Journalist Alejandro Horowicz considers that the "relato" is a tool used in the class struggle.[23] Historian Norberto Galasso considers that journalism and foreign academia can not be trusted in their descriptions and reports about the Kirchners, as he considers that those have always been dominated by the ruling classes.[24] Writer Pablo Alabarces considers that the state-owned media during the Kirchnerite regime reported reality and the private media reported complex lies and manipulations, but María Julia Oliván from the program 6, 7, 8 rejected that interpretation.[25]