Of all the FOIA requests made each year to the National Archives, one item has been requested more than any other: the December 21, 1970, photograph of Elvis Presley and Richard M. Nixon shaking hands during Presley's visit to the White House. 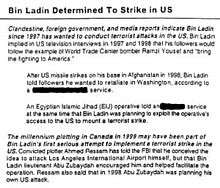 Journalists and historians founded the National Security Archive in 1985 to enrich research and public debate about national security policy.[1] The National Security Archive continues to challenge national security secrecy by advocating for open government, utilizing the FOIA to compel the release of previously secret government documents, and analyzing and publishing its collections for the public.

As a prolific FOIA requester, the National Security Archive has pried loose a host of seminal government documents, including: the most FOIA’d document at the U.S. National Archives – a December 21, 1970 picture of President Richard Nixon’s meeting with Elvis Presley;[2] the CIA’s “Family Jewels” list that documents decades of the agency’s illegal activities;[3] the National Security Agency’s (NSA) description of its watch list of 1,600 Americans that included notable Americans such as civil rights leader Martin Luther King, boxer Muhammad Ali, and politicians Frank Church and Howard Baker;[4] the first official CIA confirmation of Area 51;[5] U.S. plans for a “full nuclear response”[6] in the event the President was ever attacked or disappeared; FBI transcripts of 25 interviews with Saddam Hussein after his capture by U.S. troops in December 2003;[7] the Osama bin Laden File,[8] and the most comprehensive document collections available on the Cold War, including the nuclear flashpoints occurring during the Cuban Missile Crisis and the 1983 “Able Archer” War Scare.[9] 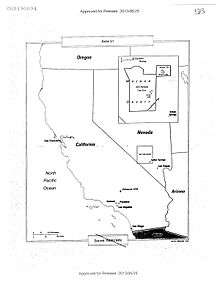 The CIA's declassified map of Groom Lake/Area 51 disclosed to the National Security Archive thanks to a FOIA request.

In February 2011, the National Security Archive won Tufts University’s Dr. Jean Mayer Global Citizenship Award[10] for “demystifying and exposing the underworld of global diplomacy and supporting the public’s right to know.” In September 2005, the Archive won the Emmy Award for outstanding achievement in news and documentary research.[11] In 1998, the National Security Archive shared the George Foster Peabody Award for the outstanding broadcast series, CNN's Cold War. In April 2000, the National Security Archive won the George Polk Award,[12] for “facilitating thousands of searches for journalists and scholars. The archive, funded by foundations as well as income from its own publications, has become a one-stop institution for declassifying and retrieving important documents, suing to preserve such government data as presidential e-mail messages, pressing for appropriate reclassification of files, and sponsoring research that has unearthed major revelations.”

The National Security Archive publishes its document collections in a variety of ways, including on its website, its blog Unredacted, documentary films, formal truth commission and court proceedings, and through the Digital National Security Archive, which contains over 40 digitized collections of more than 94,000 meticulously indexed documents, including the newly-available 'CIA Covert Operations: From Carter to Obama, 1977-2010' and 'Argentina, 1975-1980: The Making of U.S. Human Rights Policy,' published through ProQuest.

National Security Archive staff and fellows have authored over 70 books, including the winners of the 1996 Pulitzer Prize, the 1995 National Book Award, the 1996 Lionel Gelber Prize, the 1996 American Library Association's James Madison Award Citation, a Boston Globe Notable Book selection for 1999, a Los Angeles Times Best Book of 2003,[13] and the 2010 Henry Adams Prize for outstanding major publication on the federal government's history from the Society for History in the Federal Government.

The National Security Archive regularly publishes Electronic Briefing Books [14] of newsworthy documents on major topics in international affairs on the Archive's website, which attracts more than 2 million visitors each year who download more than 13.3 gigabytes per day. There are currently over 400 briefing books available.

The National Security Archive also frequently posts about declassification and secrecy news on its blog, Unredacted.

The National Security Archive has participated in over 50 Freedom of Information lawsuits against the U.S. government, of which 30 have been successful. The suits have forced the declassification of documents ranging from the Kennedy-Khrushchev letters during the Cuban Missile Crisis[15] to the previously censored photographs of homecoming ceremonies [16] with flag-draped caskets for U.S. casualties of the wars in Iraq and Afghanistan.

The Archive has conducted annual FOIA audits since 2002. Modeled after the California Sunshine Survey and subsequent state "FOI Audits," the Archive's FOIA Audits use open-government laws to test whether or not agencies are obeying those same laws. Recommendations from previous Archive FOIA Audits have led directly to laws and executive orders which have: set explicit customer service guidelines, mandated FOIA backlog reduction, assigned individualized FOIA tracking numbers, forced agencies to report the average number of days needed to process requests, and revealed the (often embarrassing) ages of the oldest pending FOIA requests. The surveys include:

Every year the National Security Archive nominates a government agency for the Rosemary Award for worst open government performance. The award is named after President Nixon's secretary, Rose Mary Woods, who erased  18 1⁄2 minutes of a crucial Watergate tape. Past “winners” include the Department of Justice, the Federal Chief Information Officer’s Council, the FBI, the Department of the Treasury, the Air Force, and the CIA.[31]

The Archive has organized, sponsored, or co-sponsored a dozen major conferences. These include the historic conferences held in Havana in 2002 and in Budapest in 1996 respectively. For the Havana conference, which took place during the 40th anniversary of the Cuban Missile Crisis, Cuban president Fidel Castro and former US secretary of defense Robert McNamara discussed newly declassified documents showing that US president John F. Kennedy, in meetings with Soviet leader Nikita Khrushchev's son-in-law Adzhubei in January 1962, compared the US failure at the Bay of Pigs to the Soviet invasion of Hungary in 1956. The Budapest conference of 1996, carried out by the Archive's "Openness in Russia and East Europe Project" in collaboration with Cold War International History Project and Russian and Eastern European partners, focused on the 1956 uprising was a featured subject at an international conference which the Archive, CWIHP, and the Zentrum für Zeithistorische Forschung organized in Potsdam on "The Crisis Year 1953 and the Cold War in Europe." Oxford University historian Timothy Garton Ash called the conference “not ordinary at all.... this dramatic confrontation of documents and memories, of written and oral history...."[32]

Other noteworthy conferences the National Security Archive took part in include a conference held in Hanoi in 1997, during which Defense Secretary Robert McNamara met with his Vietnamese counterpart, Gen. Vo Nguyen Giap, and a series of conferences on U.S.-Iranian relations.

Based at George Washington University's Gelman Library, the Archive operates under an advisory board that is directed by the Archive’s Executive Director, Thomas Blanton, and is overseen by a board of directors.