Howard Henry Baker Jr. (November 15, 1925 – June 26, 2014) was an American politician and diplomat who served as a Republican U.S. Senator from Tennessee and Senate Majority Leader. Baker later served as White House Chief of Staff for President Ronald Reagan, and a United States Ambassador to Japan. He worked as a lobbyist and adviser at Baker, Donelson, Bearman, Caldwell & Berkowitz.[1]

Known in Washington, D.C., as the "Great Conciliator", Baker was often regarded as one of the most successful senators in terms of brokering compromises, enacting legislation and maintaining civility. Baker was a moderate conservative who was also respected enormously by most of his Democratic colleagues.[2]

Baker was born in Huntsville, Tennessee, to Dora Ann (née Ladd) and Howard Baker Sr.[3] Howard Jr.'s father served as a Republican member of the United States House of Representatives from 1951 until 1964, representing a traditionally Republican district in East Tennessee. Baker attended The McCallie School in Chattanooga, and after graduating, he attended Tulane University in New Orleans. During World War II, he trained at a U.S. Navy facility on the campus of the University of the South in Sewanee, Tennessee, in the V-12 Navy College Training Program. He served in the United States Navy from 1943 to 1946 and graduated from the University of Tennessee College of Law in 1949. The same year, he was admitted to the Tennessee bar and began his law practice.[4]

The rotunda at the University of Tennessee College of Law is now named for Baker. While he was delivering a commencement speech during his grandson's graduation at East Tennessee State University (Johnson City) on May 5, 2007, Baker was awarded an honorary doctorate degree.[5] Baker was an alumnus of the Alpha Sigma Chapter of the Pi Kappa Phi fraternity. 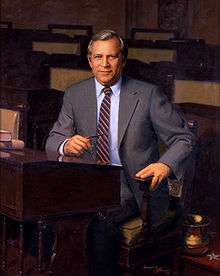 Baker began his political career in 1964, when he lost to the liberal Democrat Ross Bass in a U.S. Senate election to fill the unexpired term of the late Senator Estes Kefauver. In the 1966 U.S. Senate election for Tennessee, Bass lost the Democratic primary to former Governor Frank G. Clement, and Baker handily won his Republican primary race over Kenneth Roberts, 112,617 (75.7 percent) to 36,043 (24.2 percent).[6] Baker won the general election, capitalizing on Clement's failure to energize the Democratic base, including specifically organized labor. He won by a somewhat larger-than-expected margin of 55.7 percent to Clement's 44.2 percent. Baker thus became the first Republican senator from Tennessee since Reconstruction and the first Republican to be popularly elected to the Senate from Tennessee. Harry W. Wellford, then a private attorney but later a U.S. District Court justice and then U.S. 6th Circuit Court of Appeals Justice, served as Baker's campaign chair and closest confidant.

In 1971, President Richard Nixon asked Baker to fill one of the two empty seats on the U.S. Supreme Court.[9] When Baker took too long to decide whether he wanted the appointment, Nixon changed his mind and nominated William Rehnquist instead.[10]

In 1973 and 1974, Baker was also the influential ranking minority member of the Senate committee, chaired by Senator Sam Ervin, that investigated the Watergate scandal. Baker is famous for having asked aloud, "What did the President know and when did he know it?" The question is sometimes attributed to being given to him by his counsel and former campaign manager, future U.S. Senator Fred Thompson.[11] John Dean, former counsel to Nixon, revealed to Senate Watergate chief counsel Sam Dash in executive session that Baker had "secret dealings with the White House" during the congressional investigation. Though a juror in any future impeachment trial, Baker was recorded on February 22, 1973 promising Nixon, "I'm your friend. I'm going to see that your interests are protected." Following this, writes Watergate reporter Bob Woodward, "both the majority Democrats and minority Republicans agreed to share all information." Ultimately, one such document shared by Nixon lawyer Fred Buzhardt inadvertently suggested the presence of Nixon's secret taping system.[12]

Baker was frequently mentioned by insiders as a possible nominee for Vice President of the United States on a ticket headed by incumbent President Gerald Ford in 1976 and according to many sources, he was a frontrunner for this post. Ford, however, in a surprising move, chose Kansas Senator Bob Dole.[14]

Baker ran for U.S. President in 1980, dropping out of the race for the Republican nomination after losing the Iowa caucuses to George H.W. Bush and the New Hampshire primary to Ronald Reagan, even though a Gallup poll had him in second place in the presidential race, at eighteen percent behind Reagan at 41 percent, as late as November 1979.[15]

Baker's support of the 1978 Panama Canal Treaties was overwhelmingly unpopular, especially among Republicans,[2][16] and it cost him politically when he ran for president two years later. It was a factor in Reagan's choosing George H.W. Bush instead of Baker as his running mate.[2]

In the Senate, Baker was succeeded by Democratic congressman and future Vice President Al Gore. Baker did not seek re-election in 1984, though he did receive the Presidential Medal of Freedom that year. As a testament to Baker's skill as a negotiator, and an honest and amiable broker, Reagan tapped him to serve as Chief of Staff during part of Reagan's second term (1987–1988). Many saw this as a move by Reagan to mend relations with the Senate, which had deteriorated somewhat under the previous chief of staff, Donald Regan. (Baker had complained that Regan had become a too-powerful "Prime Minister" inside an increasingly complex imperial presidency.)

In accepting this appointment, Baker chose to skip another bid for the White House in 1988.[17]

In 2003, the Howard H. Baker, Jr. Center for Public Policy was set up at the University of Tennessee to honor him. Vice President Dick Cheney gave a speech at the 2005 ground-breaking ceremony for the center's new building. Upon the building's completion in 2008, Supreme Court Justice Sandra Day O'Connor assisted in the facility's dedication.[16]

In his later years, Baker served as Senior Counsel to the law firm of Baker, Donelson, Bearman, Caldwell & Berkowitz.[19] He was also an Advisory Board member for the Partnership for a Secure America, a not-for-profit organization dedicated to recreating the bipartisan center in American national security and foreign policy. Baker also held a seat on the board of the International Foundation for Electoral Systems, a nonprofit that provides international election support.[20]

Baker was married to the daughters of two prominent Republicans. Baker's first wife, Joy, who died of cancer, was the daughter of former Senate Minority Leader Everett Dirksen. In 1996, he married former U.S. Senator Nancy Landon Kassebaum, daughter of the late Kansas Governor Alfred M. Landon, who was the Republican nominee for President in 1936.

Baker died on June 26, 2014, at the age of 88 from complications of a stroke he suffered the week prior. He died in his native Huntsville, Tennessee, with his wife, Nancy, by his side.[23][24] Baker was a Presbyterian.