Nawabs of the Carnatic (also referred to as the Nawabs of Arcot) ruled the Carnatic region of South India between about 1690 and 1801. The Carnatic was a dependency of Hyderabad Deccan, and was under the legal purview of the Nizam of Hyderabad, until their demise.[1][2] They initially had their capital at Arcot in the present-day Indian state of Tamil Nadu. Their rule is an important period in the history of Carnatic and Coromandel regions, in which the Mughal Empire gave way to the rising influence of the Maratha Empire, and later the emergence of the British Raj.

The old province known as the Carnatic, in which Madras (Chennai) was situated, extended from the Krishna river to the Kaveri river, and was bounded on the West by Mysore kingdom and Dindigul, (which formed part of the Sultanate of Mysore). The Northern portion was known as the 'Mughal Carnatic', the Southern the 'Maratha Carnatic' with the Maratha fortresses of Gingee and Ranjana-gad. Carnatic thus was the name commonly given to the region of Southern India that stretches from the East Godavari district of Andhra Pradesh in the North, to the Maratha fort of Ranjana-Gad in the south (including Kaveri delta) and Coromandal Coast in the east to Western Ghats in the west.

The Nawabs of the Carnatic trace their origin back to second Caliph Umar ibn al-Khattab.[3] The nawab of the Carnatic was established by the Mughal Emperor Aurangzeb, who in 1692 appointed Zulfikhar Ali Khan as the first Nawab of the Carnatic, with his seat at Arcot as a reward for his victory over the Marathas led by Rajaram.[4] With the Vijayanagara Empire in serious decline, the Nawabdom of the Carnatic controlled a vast territory south of the Krishna river. The Nawab Saadatullah Khan I (1710–1732) moved his court from Gingee to Arcot. His successor Dost Ali (1732–1740) conquered and annexed Madurai in 1736. 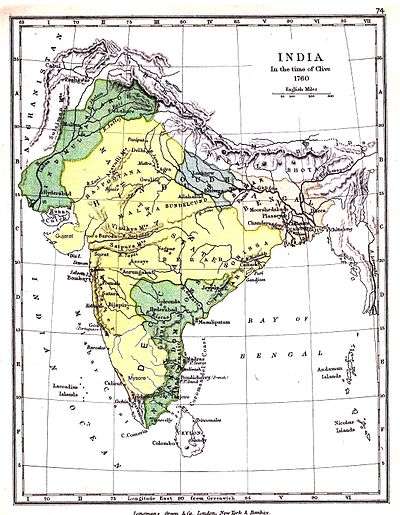 The Carnatic, shown here under Hyderabad.

In 1740, the Maratha forces descended on Arcot. They attacked the Nawab, Dost Ali Khan, in the pass of Damalcherry. In the war that followed, Dost Ali, one of his sons Hasan Ali, and a number of prominent persons lost their lives. This initial success at once enhanced Maratha prestige in the south. From Damalcherry the Marathas proceeded to Arcot, which surrendered to them without much resistance. Chanda Saheb and his son were arrested and sent to Nagpur.

The growing influences of the English and the French and their colonial wars had a huge impact on the Carnatic. Wallajah supported the English against the French and Hyder Ali, placing him heavily in debt. As a result he had to surrender much of his territory to the East India Company. Paul Benfield an English busisness man made one of his mayor loans to the Nawab for the purpose of enabling him, who with the aid of the English, had invaded and conquered the Mahratta state of Tanjore. Wikipedia Paul Benfield (1742-1810)

The thirteenth Nawab, Ghulam Muhammad Ghouse Khan (1825–1855), died without issue, and the British annexed the Carnatic Nawabdom, applying the doctrine of lapse. Ghouse Khan's uncle Azim Jah was created the first Prince of Arcot (Amir-e-Arcot) in 1867 by Queen Victoria, and was given a tax free-pension in perpetuity. This privilege continues to be honoured by the Government of India. This status is protected by the Indian Constitution, and the family continues to retain its privileges and titles. The current Prince of Arcot, Abdul Ali, inherited the title in July 1994.

Subedar Nawabs of the Carnatic

Nawabs of Carnatic under European Influence