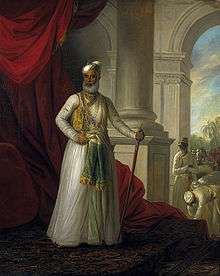 Muhammed Ali Khan Walla-Jah, the Nawab of the Carnatic, portrait by George Willison 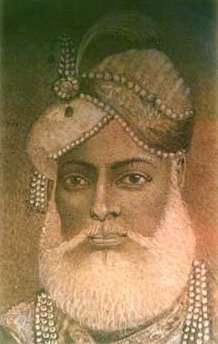 Another portrait of Muhammad Ali 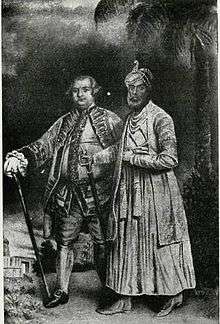 It was said of Muhammad Ali Khan Wallajah, that he could be courteous, immensely hospitable, always emulating English customs and manners, such as taking breakfast and tea, and sitting on chairs rather than cushions. He held two investitures, bestowing the KB upon Sir John Lindsay and Sir Hector Munro, in 1771 and 1779, respectively.

He granted the titles of Siraj ud-Daula, Anwar ud-din Khan Bahadur, and Dilawar Jang, together with the Subadarship of the Carnatic Payeen Ghaut and a mensab of 5,000 zat and 5,000 sowar, the Mahi Maratib, Naubat, etc. by Imperial firman on 5 April 1750.

He joined forces with Nasir Jung and the British in opposing Chanda Sahib, the French nominee for the Subadarship. He defeated by the French at Gingee in December 1750, and fled to Trichnopoly for a second time. He was received an Imperial firman confirming his possession of the Carnatic and appointing him as Naib to Viceroy of the Deccan, 21 January 1751.

He was recognised by the Treaty of Paris as an independent ruler, 1763 (recognised by the Emperor of Delhi 26 August 1765). Raised to the titles of Walla Jah 1760, and Sahib us-Saif wal-qalam Mudabbir-i-Umur-i-'Alam Farzand-i-'Aziz-az Jan by Emperor Shah Alam II.

Sir John Macpherson, writing to Lord Macartney in November 1781 declared, "I love the old man...mind me to my old Nabob. I have been sending him sheep and bags of rice by every ship. It is more than he did for me when I was fighting his battles."

The Nawab was an ally of the British East India Company, but also harboured great ambitions of power in the South Indian arena, where Hyder Ali of Mysore, the Marathas, and the Nizam of Hyderabad were constant rivals. The Nawab could also be unpredictable and devious, and his breach of promise in failing to surrender Tiruchirappalli to Hyder Ali in 1751 was at the root of many confrontations between Hyder Ali and the British.

When Hyder Ali swept into the Carnatic towards Arcot on 23 July 1780, with an army estimated at 86–100,000 men, it was not the Nawab, however, but the British who had provoked Hyder Ali's wrath, by seizing the French port of Mahé which was under his protection. Much of the ensuing war was fought on the Nawab's territory.

For the defence of his territory, the Nawab paid the British 400,000 pagodas per annum (about £160,000) and 10 out of the 21 battalions of the Madras army were posted to garrison his forts. The British derived income from his jagirs (land grants).[1]

For a period the situation of the Nawab was a significant factor in Westminster politics. The Nawab had borrowed heavily; and many East India Company officials, in India or in the United Kingdom, were his creditors. Elections in the UK could be, and were, influenced by nabob money, with the result that a group of about a dozen Members of Parliament formed a discernible "Arcot interest", as it was called.

By the 1780s issues affecting Arcot were therefore having a direct impact on British politics: the debts of the Nawab mattered in domestic terms.[2]

He died from gangrene poisoning, at Madras on 13 October 1795. He was buried outside the gate of the Gunbad of Shah Chand Mastan, Trichinopoly.

He was succeeded by his son Umdat ul-Umara, who was later accused of supporting Tipu Sultan the heir of Hyder Ali during the Fourth Anglo-Mysore War.