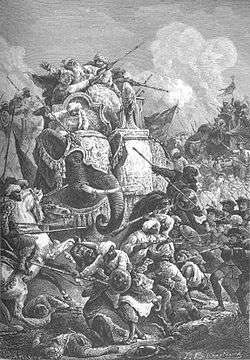 Death of the Nabob of the Carnatic in a battle against the French in 1749, by Paul Philipoteaux.

Anwaruddin Khan (1672 – 3 August 1749), aka Muhammad Anwaruddin, was the 1st Nawab of Arcot of the second Dynasty. He was a major figure during the first two Carnatic Wars. He was also Subehdar of Thatta(Pakistan) from 1721-1733.

Nawab Anwaruddin Khan was born at Gopamau, a place in the Hardoi District of Awadh, in 1672. He was the son of Haji Muhammad Anwar ud-din Khan.

He went to Delhi and enlisted in the imperial army and soon rose to a high position. He was the Yameen-us-Sultanat (right-hand man) of Asaf Jah I (aka Nizam-ul-Mulk), the first Nizam of Hyderabad.

He was also the ruler of Governor of Eloore and Rajamundry after 1725, Minister of Hyderabad, Faujdar of Korah and Jahanabad, He was granted the titles of Anwar ud-din Khan Bahadur by Emperor Aurangzeb 'Alamgir. to Shahamat Jang by Emperor Shah Alam I, and Siraj ud-Daula by Emperor Muhammad Shah. He was sometime Naib-wazir of the Empire, Faujdar of Srikakulam, Rajamahendravaram and Machlipatnam 1724, Nazim of Hyderabad 1725-1743.

In 1746, the French and the English fought to achieve supremacy over each other in India in the First Carnatic War. The Carnatic region became the arena of their action.

In 1746, the French captured the British post at Madras, and threatened but were unable to take that at Cuddalore. Muhammad Anwaruddin had warned both parties against attacking each other, but the French had disregarded his warning, and Joseph François Dupleix, the French governor-general, had placated him by offering him Madras.

However, after its capture, Dupleix rescinded the offer, and Muhammad Anwarudding sought to capture it from them. He sent an army of 10,000 men under his son Mahfuz Khan. They fought against the 300-man French force in the Battle of Adyar on the banks of the Adyar River, and lost.[1] The decisive French victory demonstrated the effectiveness of well-trained European forces in combating poorly trained Indian troops.

While the British and the French supported their respective candidates for the Nawabship, they also took sides in the conflict over succession to the Nizam of Hyderabad. After the death of Nizam-ul-Mulk in 1748, there arose a rivalry between Nasir Jung, his second son, and Muzaffar Jang, his grandson. Muzaffar Jang came to the south with a strong force and allied himself with Chanda Sahib and the French.

The aging Nawab Muhammad Anwaruddin, supported by the English, met the French army at Ambur on 3 August 1749 and was killed in the battle at the age of 77. He was mentioned as the oldest soldier to die on battlefield in "Ripley's believe it or not". Ripley stated that the Nawab died of gunshot wounds but that has not been independently verified.