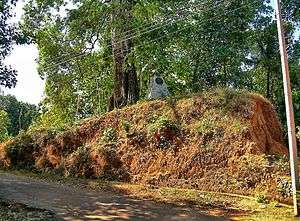 The relics of the entrance of travancore lines

Nedumkotta or Travancore lines was a wall built as a protection against consistent invasion and threats from northern kingdoms mainly Zamorins of Kozhikode. It was built by the Dharma Raja Karthika Thirunal (d. 1654), King of Travancore with the support and permission of the Kingdom of Kochi.

The Nedumkotta was a defence fortification constructed along the northern borders of the erstwhile Travancore State. It passed through the territories of the then Cochin State.

The Nedumkotta was built primarily to resist the invasion under Hyder Ali Khan against Travancore State. It was raised mainly with clay and mud, and reinforced with stones, laterite and granite at strategic places. It started from the KrishanKotta on the west coast, above Kodungallur, and stretched up to the Annamalai Hills on the Western Ghats. It was about 48 km long, 20 feet wide and 12 feet high. Its alignment was along the Periyar river on the west coast up to Chalakudy from where it went along the Chalakudy river up to the Annamalai Hills in the east. There were underground cells to store gunpowder and other war materials, special chambers for soldiers to live, and look-outs and mounted field-guns all along the fortification. Besides, on the north side of the fortification, ditches were dug twenty feet wide and sixteen feet deep, and filled with thorny plants, poisonous snakes, and hidden weapons. On the south side as well as on the top of the fortification, wide roads were laid for the convenience of military movements.

The fortification was constructed during the regime of Rama Varma Raja, popularly known as Dharma Raja of Travancore, and under the direct guidance and supervision of the then Prime Minister, Ayyappan Marthanda Pillai, and the then Commander of the Travancore Army, the Dutch Captain D'Lenoy. This historic defence line was comparable to the Great Wall of China except that the latter was more ancient and greater in length. It was under the protective cover of this Nedumkotta that a small army of Travancoreans under the command of Raja Keshavadas defeated and frustrated near Alwaye a formidable army led by Tipu Sultan.

Today there is no physical evidence of the historic Nedumkotta in the form of even ruins anywhere in the Chalakudy taluk -Konoor (Koratty Kizhakkummuri), Muringoor Thekkummury, Kadukutty,Kuruvilassery and Poyya- through which it passed. Names of forts remains in Chettuva, Mullurkara,Thrissur and Enamanakhal. However, some place names having a reference to the historic fortification are still popular in the northern borders of the erstwhile Cochin and Travancore States - Krishnan Kotta (meaning Krishnan Fort), Kottamukku (fort corner), Kottamuri (part of a fort), Kottaparampu (fort land), Kotta Vazhi (fort road), Kottalaparampu (magazine ground), Palayam (cantonment), etc. It started from Pallipuram Kotta near the sea, touches kottamukku, krishnankotta and extended till the Foot hills of the Anamalai in the Western Ghats. The Chalakudy river and lagoon which falls on the alignment was left alone as they themselves were a barrier. A trench 20 feet (6.1 m) deep and 16 feet (4.9 m) wide was built along the northern side of the wall for the full length. At some places the wall reached 50 ft (15 m) in height. Hollows were made inside where about 100 soldiers could hide and make an ambush. A company of soldiers was stationed about every kilometer with ammunition store house at strategic points. There were also caves in the nearby wells to hide in the possibility of an unannounced attack. Muringoor Kottamury (3 km south of Chalakudy) is the place where the NH47 crosses the Nedumkotta.

The places where fortification once stood is in the present Chalakudy Taluk in Thrissur District, Kerala.

Attack of Tipu Sultan and its destruction

24 years after his father, Hyder Ali had attacked Kochi, Tipu Sultan started on a conquest to conquer Kochi and Travancore. On December 31, 1789 Tipu attacked the lines and gained entry but was ambushed by a small 20-member team led by Vaikom Padmanabha Pillai of Travancore army and had to retreat. Later in April he came back with reinforcements and this time was able to break into the territory after making the way through the Nedumkotta. He destroyed the wall at Konoor kotaa or kottamuri and advanced further. He filled trenches for a few kilometers to enable his army to move forward.He destroyed many temples which fuelled cast systems but he did respect other religion. He finally reached the Periyar river banks at Aluva and camped there. However, by this time a small group led by Vaikom Padmanabha Pillai and Kunjai Kutty Pillai went upstream and managed to break the walls of a dam at Bhoothathankettu causing heavy flash floods downstream Periyar river.[1] All the ammunition and gunpowder of Tipu's army got wet and became inactive. He was thus forced to return. Information that the British army was planning an attack on Srirangapatnam hastened his retreat.

Many portions of the wall were destroyed during war, others later eroded away due to heavy rains, and trenches were filled up. The most of the ruins whatever left have also been lost due ignorance about the historical structure among the locals.[2] Unfortunately, there are no memorials erected anywhere in Parur, or Angamaly or Alwaye to honour the Dharma Raja, D'Lennoy and Ayyappan Marthanda Pillai who were the architects of the fort; or Raja Keshavadas under whose direct command a comparatively small army humbled and defeated the invading army of Tipu Sultan.