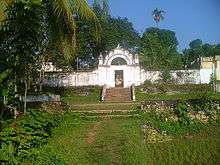 Entrance to the Kilimanoor Palace or "Arch"

Kilimanoor palace is famous as the birthplace of Raja Ravi Varma, the celebrated Indian painter.

The Palace complex covers more than six hectares, and comprises the traditional residential structures of Kerala, like the Nalukettu, small and medium sized buildings, two ponds, wells and sacred groves (kaavu). Raja Ravi Varma is said to have built and maintained some of the buildings from the proceeds of his paintings. Families related to the Travancore royal house continue to live here.

The royal house at Choottayil, Kilimanoor has a history stretching back more than 300 years, although the oldest buildings are from a much earlier period. However, it was in 1753 that the palace was built in its present form.

In 1705 (ME 880) the son and two daughters of Ittammar Raja of Beypore Thattarikovilakam, a Kolathunadu royal house, were adopted into the Royal house of Venad. Ittammar Raja's sister and her sons, Rama Varma and Raghava Varma, settled in Kilimanoor and married the now adopted sisters. Marthanda Varma, the founder of the Kingdom of Travancore, was the son of Raghava Varma. The nephew[1] of Raghava Varma, Ravi varma Koil Thampuran, married the sister of Marthanda Varma. Their son became known as Dharma Raja Kartika Thirunnal Rama Varma.

In 1740 when an allied force,[2] led by Dutchman Captain Hockert supporting the Deshinganadu King, attacked Venad, an army from Kilimanoor resisted and then defeated them. Although a small victory, this was the first time an Indian army had defeated a European power. In 1753, in recognition of this feat, Marthanda Varma exempted the areas controlled by the Kilimanoor palace[3] from taxes, and granted them autonomous status.[4] The present palace complex was built at this time, together with the Ayyappa temple.[5] for the family deity,Sastha or Ayyapan.[6]

Velu Thampi Dalawa held meetings at Kilimanoor palace while planning uprisings against the British. He handed over his sword at the palace before going into his final battle against the British, and India's first President, Dr Rajendra Prasad received this sword from the palace and it is now kept in the National Museum in Delhi. 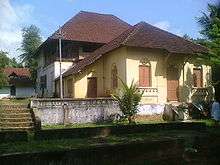 Birthplace of Raja Ravi Varma with his studio in the foreground

This article is issued from Wikipedia - version of the 8/20/2015. The text is available under the Creative Commons Attribution/Share Alike but additional terms may apply for the media files.