This article is about Nikkō the city. For other uses of the names "Nikkō" and "Nikko", see Nikko (disambiguation).

Nikkō (日光市, Nikkō-shi) is a city located in Tochigi Prefecture, in the northern Kantō region of Japan. As of May 2015, the city had an estimated population of 84,197 and a population density of 58.1 persons per km². Its total area was 1,449.83 km². it is a popular destination for Japanese and international tourists. Attractions include the mausoleum of shogun Tokugawa Ieyasu (Nikkō Tōshō-gū) and that of his grandson Iemitsu (Iemitsu-byō Taiyū-in), and the Futarasan Shrine, which dates to the year 767. There are also many famous hot springs (onsen) in the area. Elevations range from 200 to 2,000 m.[1] The Japanese saying "Never say 'kekkou' until you've seen Nikko"—kekko meaning beautiful, magnificent or "I am satisfied"—is a reflection of the beauty and sites in Nikkō.[2][3] 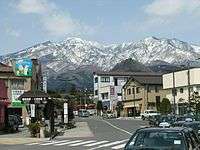 Nikkō covers a large area (1,449.83 km²) of rural northwestern Tochigi approximately 140 km north of Tokyo and 35 km west of Utsunomiya, the capital of Tochigi Prefecture. It is the third-largest city (by area) in Japan, behind Takayama and Hamamatsu.

Both the Watarase River and the Kinugawa River pass through the city. Lake Chūzenji and the Kegon Falls lie in Nikkō, as does the Nikko Botanical Garden. The city's many mountains and waterfalls have made it an important source of hydroelectric power. The area has also been used for mining copper, aluminum and concrete.

The weather in Nikkō is fairly similar to that of the northern island of Hokkaidō even though Nikkō is much closer to Tokyo than Hokkaidō. The elevation of Nikkō plays an important role in this fact. It will usually get cooler as one ascends the mountain. The average temperature of Nikkō is around 7 °C (44 °F) [4] with the warmest months reaching only about 22 °C (72 °F)[5] and the coldest reaching down to about -8 °C (17 °F).[6]

Nikkō experiences a humid continental climate (Köppen climate classification Dfb) with cold, snowy winters and predominantly mild, very wet summers. Nikkō is much cooler than nearby parts of Honshu because it is situated at an altitude of 1298m above sea level. 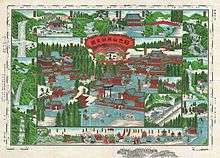 Shōdō Shōnin (勝道上人) established the temple of Rinnō-ji in 766, followed by the temple of Chūzen-ji in 784. The village of Nikkō developed around these temples. The shrine of Nikkō Tōshō-gū was completed in 1617 and became a major draw of visitors to the area during the Edo period. It is known as the burial place of the famous Japanese shogun Tokugawa Ieyasu. A number of new roads were built during this time to provide easier access to Nikkō from surrounding regions. Nikkō Tōshō-gū, Futarasan Shrine, and Rinnō-ji now form the UNESCO World Heritage Site Shrines and Temples of Nikkō.

During the Meiji period Nikkō developed as a mountain resort, and became particularly popular among foreign visitors to Japan. The Japanese National Railways began service to Nikkō in 1890 with the Nikkō Line, followed by Tobu Railway in 1929 with its Nikkō Line.

Nikkō was incorporated as a town in 1889, (part of Kamitsuga District). It was upgraded to city status in 1954 after merging with the neighboring village of Okorogawa.

Nikkō is heavily dependent on tourism to its historical and scenic sites and hot spring resorts. Hydroelectric power production, food processing, and the metals industry remain important components of the economy. 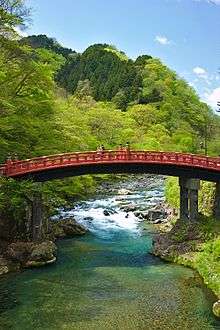 The Shinkyo bridge, one of the symbols of Nikko. 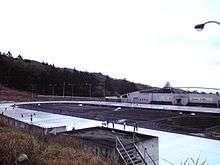 There is also a speed skating oval.