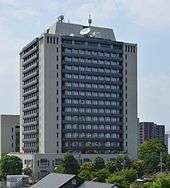 Utsunomiya (宇都宮市, Utsunomiya-shi) is the capital and most populous city of Tochigi Prefecture, in the northern Kantō region of Japan. As of May 2015, the city had an estimated population of 518,200 and a population density of 1240 persons per km². Its total area was 416.85 km². Utsunomiya is famous for its gyoza (pan fried dumplings). There are more than two hundred gyoza restaurants in Utsunomiya.[1]

Greater Utsunomiya (宇都宮都市圏, Utsunomiya Toshi-ken) had a population of 888,005 in the 2000 Census. The nearby city of Oyama is included in Greater Tokyo, but Greater Utsunomiya is not, despite the two areas amalgamating somewhat. It is the 10th most populated city in the Kanto region.

Utsunomiya is located in south-central Tochigi Prefecture in the northern Kantō plains. It is approximately 100 km north of Tokyo. The historic town of Nikkō is approximately 25 km northwest of Utsunomiya. The average altitude of the city is 100 meters.

Utsunomiya has a humid subtropical climate (Köppen climate classification Cfa) with hot and humid summers and cool winters. Precipitation is heavy in the summer wet season, especially from July to September, and it is noticeably drier in the winter months from December to February.

Archaeologists have uncovered evidence that the area of Utsunomiya has been continuously settled since the Japanese Paleolithic period onwards, and numerous burial mounds from the Kofun period are found within its borders. The Utsunomiya Futarayama Shrine (宇都宮二荒山神社), which is the Ichinomiya of Shimotsuke Province claims to have been founded in 353 AD. The town of Utsunomiya developed around this shrine, and the area was under the control of the Utsunomiya clan, an offshoot of the Fujiwara clan from the Heian through Sengoku periods, and was destroyed by Toyotomi Hideyoshi.

During the Edo period, the Utsunomiya area was ruled by a succession of daimyo clans under Utsunomiya Domain, and prospered from its location at the junction of the Nikkō Kaidō and the Ōshū Kaidō. During the Bakumatsu period Boshin War, the Battle of Utsunomiya Castle was a major conflict in the northern Kanto area. Following the Meiji restoration, Utsunomiya was briefly (1871-1873) part of Utsunomiya Prefecture, which was then merged into the new Tochigi Prefecture, and became capital of the prefecture in 1884. Utsunomiya became an important garrison for the Imperial Japanese Army.

The city limits were expanded from 1951-1955 by annexing neighboring Suzumenomiya town and Hiraishi, Yokokawa, Mizuhono, Kunimoto, Shiroyama, Tomiya, Toyosato, and Sugatagawa villages and the part of Shinoi village from Kawachi District and Kiyohara village from Haga District. In 1996, Utsunomiya was designated a core city within increased autonomy. On March 31, 2007, Utsunomiya absorbed the towns of Kamikawachi and Kawachi (both from Kawachi District), pushing the population of Utsunomiya City over 500,000.

Utsunomiya is the commercial and industrial center of Tochigi Prefecture. Utsunomiya is home to a Canon optical manufacturing plant, a Japan Tobacco plant, Honda design centers, and various other industrial concerns in the Kiyohara Industrial Park. In addition, one of the largest malls in the north Kantō region, Bell Mall is located near central Utsunomiya.

Utsunomiya is served by the high-speed Tohoku Shinkansen line from Tokyo, as well as a number of suburban lines operated by East Japan Railway Company (JR East) and the private railway operator Tobu Railway.

Construction of a Light Rapid Transit system is planned, with completion scheduled for December 2019.[4]