Tobu Railway Co., Ltd. (東武鉄道株式会社, Tōbu Tetsudō Kabushiki-gaisha) is a Japanese commuter railway company in the Greater Tokyo Area as well as an intercity and regional operator in the Kantō region. Excluding the Japan Railways Group companies, Tobu's 463.3 km rail system is the second longest in Japan after Kintetsu. It serves large portions of Saitama Prefecture, Gunma Prefecture and Tochigi Prefecture, as well as northern Tokyo and western Chiba Prefecture.

The Tobu corporate group is also engaged in road transportation (bus/taxi), real estate, and retail. It is the largest investor in the Tokyo Skytree, the tallest structure in Japan. The company is a member of the Mizuho keiretsu.

The name "Tobu" is formed from the kanji for east (東) and Musashi (武蔵), the initial area served.

Tobu is one of the oldest railway companies in Japan. It was established in November 1897 and began operation between Kita-Senju and Kuki in August 1899. The Tojo Railway was founded in 1911 as a separate company, but shared its president and head office with Tobu.[1]

Tobu was the first railway in the Kanto region to adopt quadruple tracks, on the Kita-Senju to Takenotsuka sector in 1974. The Tobu Dobutsu Koen (Tobu Animal Park) opened in 1981.[2] 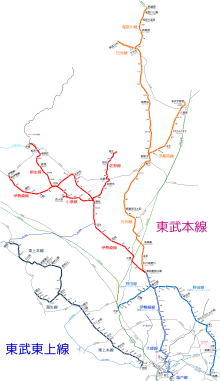 Diagram of the Tobu network, showing main lines to right and Tojo Lines to lower left

Tobu has two isolated networks which are connected by the Chichibu Railway for ferrying of its rolling stock.

The Tojo Line runs northwest from Ikebukuro Station in Tokyo to central and western Saitama Prefecture. A branch, the Ogose Line, runs to Ogose from Sakado Station.

Eight new three-car 500 series EMU trains are scheduled to be introduced on limited express services on lines from Asakusa from spring 2017.[4]