For other locations with a similar name, see Fuchū (disambiguation).

The government of ancient Musashi Province was established in Fuchū by the Taika Reform, and the city prospered as the local center of politics, economy, and culture. It prospered as a post town on the Kōshū Kaidō in the Edo period, and the Kita Tama District public office was placed here after the start of the Meiji era.

Fuchū is located approximately 20 km west of the centre of Tokyo. Using the Keiō Line from Shinjuku, it is 25 minutes to Fuchū Station (main station). It spreads across the Musashino Terrace on the left bank of the Tama River, facing the Tama hills on the opposite shore. The Tama River flows through the southernmost end of the city from west to east. The Kokubunji cliff runs west to east along the north; the Fuchū cliff runs west to east through the center of the city. The former has a height of 10 to 15 m, and the latter, 10 to 20 m. Sengenyama with an altitude of 79 m is in the northeast part, and the height from the foot is about 30 m. The region is mostly flatland. To the south of the Fuchū cliff is the Tama River lowlands while to the north of the Kokubunji cliff is the Musashino side of Musashino Plateau; the region between is the Tachikawa side of the Musashino Plateau. The cliffs are called hake in the local dialect. The Nogawa river, a tributary of the Tama River, grazes the northeast end of the city.

Fuchū has five public high schools are operated by the Tokyo Metropolitan Government Board of Education, and one private combined middle/high school. 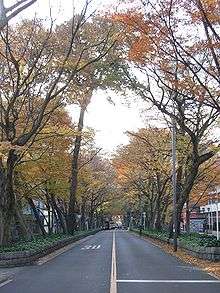