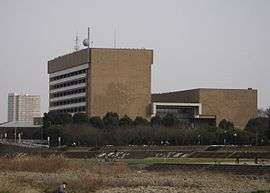 Hachiōji (八王子市, Hachiōji-shi) is a city located in the western portion of Tokyo Metropolis, in the central Kantō region of Japan. As of 1 February 2016, the city had an estimated population of 579,330 and a population density of 3110 persons per km². Its total area was 186.38 square kilometres (71.96 sq mi).

Hachiōji is located in the foothills of the Okutama Mountains of western Tokyo, about 40 kilometers west of the center of the 23 special wards of Tokyo. The city is surrounded on three sides by mountains, forming the Hachioji Basin which opens up toward the east in the direction of Tokyo. The mountain ranges in the southwest include Mount Takao (599 m) and Mount Jinba (857 m), two popular hiking destinations which can be reached by train and bus, respectively.

The area of present-day Hachiōji was part of ancient Musashi Province. It has been an important junction point and post town along the Kōshū Highway, the main road that connected the historical Edo (today's Tokyo) with western Japan. Hachioji Castle was built during the Sengoku period in 1584 by Hōjō Ujiteru, but was soon destroyed in 1590 by Toyotomi Hideyoshi. During the Edo period, the area was tenryo controlled directly by the Tokugawa shogunate.

In the post-Meiji Restoration cadastral reform of July 22, 1878, the area became part of Minamitama District in Kanagawa Prefecture. The town of Hachiōji was created on April 1, 1889 with the establishment of municipalities law. Minaitama District was transferred to the administrative control of Tokyo Metropolis on April 1, 1893. Hachiōji gained city status on September 1, 1917.

During the Meiji period, Hachiōji prospered as an important location for the production of silk and silk textiles. The industry faded away, however, in the 1960s. Today, Hachiōji mainly serves as a commuter town for people working in Tokyo, and as a location for many large colleges and universities.

he metropolis also operates the Hachioji School for the Blind. 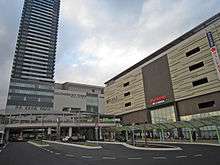 Hachioji stretches over a large area, combining such diverse parts as the densely populated city center and its shopping district with the hardly populated rural areas in the west.