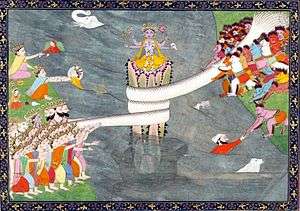 Kurma avatar of Vishnu, below Mount Mandara, with Vasuki wrapped around it, during Samudra manthan, the churning of the ocean of milk, ca 1870

Vishnu and Lakshmi on Shesha Naga over Kshirasagar - Ocean of Milk, ca 1870

In Hindu cosmology, the Ocean of milk (kṣīroda, kṣīrābdhi or Kṣīra Sāgara) (Tamil: பாற்கடல்) is located in pole star.[1] It is located as the fifth from the center of the seven oceans that surround loka or directional space and separate it from aloka or non-directional space. It surrounds the continent known as Krauncha.[2] In Hinduism, the devas (gods) and asuras (demons) worked together for a millennium to churn the ocean and release Amrita the nectar of immortal life.[3] It is spoken of in the Samudra manthan chapter of the Puranas, a body of ancient Sanskrit legends. It is also the place where Vishnu reclines over Shesha Naga, along with his consort Lakshmi.

"Ocean of Milk" is the English translation of the Sanskrit terms kṣīroda, kṣīrābdhi or kṣīrasāgara, from kṣīra "milk, curdled milk" and -uda, sāgara "water, ocean" or abdhi "ocean".

The Churning of the Ocean

Hindu history also contains a story about the churning of the Cosmic Ocean in order to obtain Amrita – the nectar of immortal life. At the suggestion of Vishnu the gods, (devas) and demons (asuras) churn the primeval ocean in order to obtain Amrita which will guarantee them immortality. To churn the ocean they used the Serpent King, Vasuki, for their churning-string. For a churning pole they use Mount Mandara placed on the back of a Great Tortoise – the Kurma Avatar of Vishnu. As the gods and demons churned the sea, a terrible poison issued out of its depths which enveloped the universe. The devas and asuras approach Shiva who took the poison into his throat and swallowed it. Shocked by his act, Goddess Parvati strangled his neck and hence managed to stop it in his neck and prevent it from spreading. However, the poison was so potent that it changed the colour of his neck to blue, thereby earning him the name of Neelakanta (blue-throated one).[4] When the Amrita finally emerged along with several other treasures the devas and asuras fought over it. However Vishnu in the form of Mohini the enchantress manages to lure the asuras into handing over the Amrita to her, which she then distributes to the devas. Rahu, an asura, disguises himself as a deva and tries to drink some Amrita himself. Surya (the sun-god) and Chandra (the moon-god) alert Vishnu to this deception. Vishnu then decapitates Rahu just as he is about to swallow the nectar, leaving only his head immortal.

According to Bhagavata, outcome of the churning of Ksheerasagara is Halahalam (terribly destructive poison), Amrita (nectar) with Dhanvantari (physician of Gods), Lakshmi (Goddess of Riches), Jyestha (Goddess of Poverty), Chandra (the Moon), a white elephant named Airavata, a horse named Uchchaisrava, Kalpavriksha (the tree that yields whatever is desired).

The Churning of the Cosmic Ocean (the Milky Way) is told in several ancient texts, notably in the Valmiki's Ramayana Canto 45 [5] and in the Mahabharata.[6]

A bas-relief at the temple of Angkor Wat in Cambodia includes a depiction of devas and asuras working together to stir up the Ocean of Milk in an attempt to free the precious objects lost within, including the elixir of immortality called amrita. The scheme, masterminded by Vishnu, was to wrap the serpent Vasuki around Mount Mandara and then to rotate the mountain and to churn the surrounding sea in the manner of a gigantic food processor, by alternately pulling on the serpent's head and then on his tail.[7]

Paramatma, the Supersoul in the heart of everyone through whom all Avatars come to material universe, is lying on that Milk ocean. So Paramatma is Ksirodakasayi Vishnu – who is in every atom and heart of all 8 400 000 kinds of material bodies, as the soul in each heart called atma which in essence is same as the Paramatma).

Some relationships between the milk ocean and Goloka, the planet of Krishna may be found. Krishna is the same as Vishnu, who lives in a white castle on the ocean of milk and on other hand, Krishna is the same as Vishnu, but He lives on Goloka, a planet of cows (Sanskrit: "Go" - cow, "Loka" - world). Other milky oceans are the yoghurt ocean, and the ghee ocean. These oceans are representative of the meaning that Absolute Truth is also sweet and wonderful – it suggests that humans not only live on Earth with a salt water ocean only, but also that there are other oceans like the sweet water ocean among these 7 oceans that humans may aspire to live in. The material world is compared to the ocean of fault, especially in Kali-Yuga, so a way to go out of this matter is to enter the ocean of bliss – in the eternal world of Vaikuntha. The supreme planet in that ocean of Truth is Goloka, though only a few persons out of thousands and thousands may come to the conclusion of Absolute Truth and may subsequently live on this planet of cows, where the milk ocean exists.

In modern cosmology, the Milky way (The galaxy in which we live) is similarly depicted as a white spiral cloud. The rotating spiral galaxy structure of the milky way correlates with the ocean of milk being churned. The Super massive Black hole at its center correlates with the extremely heavy Mount Mandara. It is also to be noted that even the name used in modern cosmology is analogous with this ancient reference.