This article is about the geographical area. For the Somali clan, see Ogaden (clan).

Ogaden (pronounced and often spelled Ogadēn; Somali: Ogaadeen, Amharic: ኦጋዴን?) is the territory comprising the eastern portion of Ethiopia. The inhabitants are predominantly ethnic Somali and Muslim, demands for the autonomy of this region The title "Ogaden", is often preferred by the international communities.

The Ogaden is a plateau, with an elevation above sea level that ranges from 1,500 metres in the northwest, falling to about 300 metres along the southern limits and the Wabi Shebelle valley. The areas with altitudes between 1,400 and 1,600 metres are characterised as semi-arid; receiving as much as 500–600 mm of rainfall annually. More typical of the Ogaden is an average annual rainfall of 350 mm and less. The landscape consists of dense shrubland, bush grassland and bare hills.[2] In more recent years, the Ogaden has suffered from increasingly erratic rainfall patterns, which has led to an increasing frequency of major droughts: in 1984–85; 1994; and most recently in 1999–2000, during which pastoralists claim to have lost 70–90 percent of their cattle.[3] 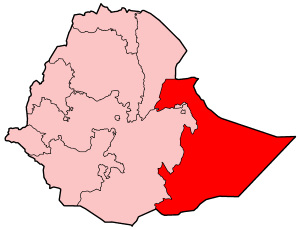 There are few historical texts written about the people who lived in what is known today as the "Ogaden" region of Ethiopia. Ogaden was part of the Somali Ifat Sultanate in the 13th and beginning of the 14th centuries AD. The borders of the sultanate extended to the Shewa - Addis Ababa area of Ethiopia. The Ifat Sultanate was succeeded by the Adal Sultanate. There was an ongoing conflict between the Adal Sultanate and the Christian Kingdom of Abyssinia throughout this time. During the first half of the 16th century, most of Abyssinian territory was conquered and came under the rule of Adal, when Ahmad ibn Ibrahim al-Ghazi, the leader of the Somali-dominated Adal's Army, took control.[4]

During the last quarter of the 19th century, the region was conquered by Menelik II of Abyssinia and Ethiopia solidified their claim by treaties in 1897.[5]

I.M. Lewis argues a subtly different interpretation of this treaty, emphasising that "the lost lands in the Haud which were excised from the Protectorate [i.e. British Somaliland] were not, however ceded to Ethiopia".[6] In practice, Ethiopia exerted little administrative control east of Jijiga until 1934 when an Anglo-Ethiopian boundary commission attempted to demarcate the treaty boundary. This boundary is still disputed.[7]

The Italians annexed the region to Italian Somaliland in 1936 after their conquest of Ethiopia. Following their conquest of Italian East Africa, the British sought to let the Ogaden be unified with British Somaliland and the former Italian Somaliland, to realize Greater Somalia which was supported by many Ogaden Somalis.[8] Ethiopia unsuccessfully pleaded before the London Conference of the Allied Powers to gain the Ogaden and Eritrea in 1945, but their persistent negotiations[9][10] and influence from the USA eventually persuaded the British in 1948 to abandon all of the Ogaden except for the Haud, and a corridor called the Reserved Area stretching from the Haud to French Somaliland (modern Djibouti). The British returned these last parts to Ethiopia in 1954.[11]

In the late 1970s, internal unrest in the Ogaden resumed. The Western Somali Liberation Front, spurred by Makhtal Dahir, used guerilla tactics to resist Ethiopian rule. Ethiopia and Somalia fought the Ogaden War over control of this region and its peoples.

In 2007, the Ethiopian Army launched a military crackdown in Ogaden after Ogaden rebels killed dozens of civilian staff workers and guards at an Ethiopian oil field.[12] The main rebel group is the Ogaden National Liberation Front under its Chairman Mohamed O. Osman, which is fighting against the Ethiopian government. Some Somalis who inhabit Ogaden claim that Ethiopian military kill civilians, destroy the livelihood of many of the ethnic Somalis and commit crimes against the nomads in the region.[13] However, a testimony before the United States House of Representatives Committee on Foreign Affairs revealed massive brutality and killings by the ONLF rebels, which the Ethiopian government labels "terrorists."[14] The extent of this war can't be established due to a media blockade in the Ogaden region. Some international rights organizations have accused the Ethiopian regime of committing abuses and crimes that "violate laws of war,"[15] as a recent report by the Human Rights Watch indicates. Other reports have claimed that Ethiopia has bombed, killed, and raped many Somalis in the Ogaden region, while the United States continues to arm Ethiopia in the United States' ongoing War on Terror in the Horn of Africa.[16][17] [18]

This local has been a historic habitat for the endangered African wild dog, Lycaon pictus;[19] However, this canid is thought by some to have been extirpated from the Ogaden.